I have no words… 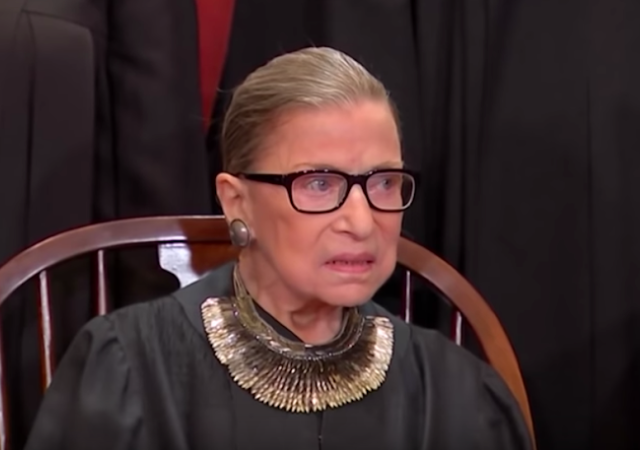 On Monday I blogged that Supreme Court Justice Ruth Bader Ginsberg missed oral arguments for the first time in her tenure because she’s recovering from surgery. Doctors removed cancerous nodules off her lung.

I wrote that people joked about giving her their limbs and organs, but also wouldn’t be surprised if people actually did this.

Say no more! Politico Chief Political Columnist Roger Simon asked Twitter today if anyone would “subtract one day off your life and add it to Ruth Bader Ginsburg’s life for one extra day of good health.”

If it were possible, would you subtract one day off your life and add it to Ruth Bader Ginsburg’s life for one extra day of good health? If just 10,000 people did this, it would add 27 productive years to her life. pic.twitter.com/RurqFmWZGp

The responses caused me to laugh a little too hard. I looked through those who answered and about 99% mocked Simon over the tweet.

If it were possible, would you all donate $1 to me so that I can become a billionaire? How awesome and productive would that be. If just 10,000 people did this, It would add a purple mattress, a $5 fill up box, and like $8,995 left over.

If you could give a pig wings and turn it into an eagle, would you do that to reduce worldwide carbon emissions, cure the common cold, and raise the pig’s self esteem?

The above makes as much sense as your idiotic tweet regarding RBG. pic.twitter.com/NBXHsG40bG

How about we subtract from her life and give life to one of the babies she’s okay with aborting instead!

Exhibit A: Not every thought should be tweeted.

So cool that so much depends on the health of one frail octogenarian. Cool, healthy system we have here in America.

Maybe she should have realized 10 years ago that retaining her own personal power for as long as possible and dying on the bench is not the best idea for ensuring the integrity of constitutional law as she chooses to interpret it.

No her life has no more value than any other life.

Perhaps you’re investing too much emotional energy in what a single government official decides on your behalf.

You know what would be SO GREAT? We stop relying on the Supreme Court so much and giving them power.

I’d tell people to can it, but I find it hilarious. Show off your crazy!

i won’t donate a day of my life to extend hers, but i would take a day off to attend her funeral…

I will give her one day, in exchange for her immediate retirement/resignation.

This kind of article is beneath LI to even publish. Politico is beneath LI in every respect and to bring up such impossible nonsense is childish!

It does illustrate the panic of the Left

I kinda thought that Mary Chastin was pointing out how ridiculous it was. I went to the tweet and looked at the comments, they were really interesting, threw one in for good measure.

What you find absurd and beneath you = the left in America now. I want to know what these clowns are thinking. And by “thinking” I mean “not thinking.”

RBG is the oldest SCOTUS Justice. The former ACLU lawyer has absolutely ZERO compassion for the lives growing in their mother’s womb. She supports Planned Parenthood, and the abysmal SCOTUS decision to grant abortion on request. Let her live out the rest of her days and then find another conservative judge to elevate to SCOTUS.

If you could take off one day of your life and add it as an extra day onto Trump’s 8 year presidency, would you?

I’ve said for years that Liberals don’t do respect. This is what they do instead, an over-the-top adulation.

Even that is purely functional. If she voted tomorrow against (to pick something not at all at random) Planned Parenthood, they would suddenly start calling her names, claiming she had outlived her usefulness, demanding that she die so that someone “better” could take her place.

It makes me so tired watching their antics.

To make this truly hilarious the same question needs to be asked about Nancy Pelosi. ROFL Wonder how many would donate to her cremation instead of an extended life span?

No. She should take days off her life for me.

Irv – Justice Kennedy is a case in point. From hero for writing the Obergefel opinion to goat for retiring during Trump’s tenure.

Even Ruth Buzzy herself has some of them in a snit for not retiring during Obama’s time in office.

Bring on another Constitutionalist to replace her!

Going to need proof of life as it is. Not “video,” not a robotic computer generated voice, not a flurry of law clerks insisting they are producing her personal work. I demand that she be seen in person by truly independent jurists to see her doing her job. If she can’t comply with that, she needs to resign. You better believe if Clarence Thomas were invisible to the public but producing purist opinions, the left would go absolutely insane (well, more insane), making every demand I’ve listed.

You contradict yourself. If she resigns, that will prove she’s alive and therefore doesn’t need to resign. If Trump truly suspected she was already dead, he could send the senate a nomination for her replacement and challenge those who complained to produce proof that there is no vacancy.

If her work product can not be independently proven to he hers, the flurry of law clerks need to bring forth her resignation. If it can be absolutely proven that she is alive, cognizant and producing her own work, well then, carry on. After the Judge Kavenaugh nomination, I really do believe the left capable of (the attempt at) hiding her death for as long as possible. I’m curious about your opinion on the question: If no one ever actually saw Clarence Thomas again, but he still served as a full member of the court, do you think the left would accept that?

“Ha You think I’m fruity, huh? I’m staying right here This is my room and noone will drag me out of it least of all my big bold son”

85? Wow, that’s already a long time to be such a sourpuss.

She reminds me of Albrecht von Wallenstein, one of the guys who made the Thirty Years’ War such a memorable event. He was never seen to smile, either.

Is 85 her age or body temperature?

This was an episode on The Twilight Zone…..which is where RBG lives.

Okay, I’ll give her the day,
– I bought that boat
– I married my first wife
– I failed that drug test and lost my dream job
– my [mom/dad; spouse; best friend; child; favorite dog] died
– I learned I had an incurable medical condition
– my child lost respect for me because he/she found out I lied

She can have those days.

You’re giving her a Country song?

LOL if we recite them backwards will it help pfg????

Dude needs to qualify his fantasy. I mean, what good does it to to give one day of your life to extend RBG’s life by a day, if she is too sick to show up to work?

I have a crazy one I’m considering starting. I want to own and play a top- grade piano before I die. Would any of you donate to a Go Fund Me collection to make my dream come true? Bösendorfer for Bear?

The concept isn’t ridiculous. People do offer God such bargains, and — at least according to Jewish teaching — every once in a while He accepts them. The Zohar (p 168) tells us that David’s 70 years of life was made up entirely of donations from Adam, Abraham, Jacob, and Joseph. Much closer to modern times, Devorah Leah, the daughter of Rabbi Shneur Zalman of Liadi, gave her life in exchange for her father’s. So the concept isn’t ridiculous; what’s ridiculous is doing this for someone like Ginsburg.

But there is always a day of reckoning. She gets those extra days, but then while using them to drive around with another liberal justice, she wrecks the car and now DJT gets to fill two slots. Be very very careful what you ask for as you just might get it.

What the Left needs is NOT more life for RBG, but rather a great taxidermist. Skin her out and drap the hide over a styrafoam mold, wrinkles and all. A little AI magic, with lever’s and pully’s and America can sit at the feet of The Wizard’s daughter. Then just transport Pelosi into a small dog and the perfect fantasy is born.

I wouldn’t be too concerned about Ginsberg passing away any time too soon. The left has her set up so that her ghost can do her deliberations for as long as they would like.

Just see when the next time someone reputable ACTUALLY sees the lady alive and kicking and not mummified.

Since I’m not absolutely, beyond any shadow of a doubt, guaranteed another day of life, hell no, but I’ll happily share my cold with her!

You got one of those colds too. I found it funny that they say to not donate blood when not feeling well. Trust me, if I had donated a unit of O-neg today, I’d be dead right now. Running on empty.

nope. rather I would deduct days from my life to take hers.
harsh?
so what.

Curious legal question for all of you: If an person has a case go before a panel of jurist and one of the panel is not present for oral arguments but still renders a decision, might that be grounds for an appeal?

It’s a good question, and I also apologize for the down-tick.

LI site admins: this is long overdue for a fix. Pleeeease?

Maybe if you were talking about an Appellate Court, but generally there is no way to “appeal” a decision from SCOTUS.

This is a serious question.

Thank you… I was thinking something along that line. I do not know what the timing was (argument vs confirmation) I just recalled a report of a decision where he did not participate and his not hearing the oral argument was given as the reason.

[I am puzzled as to how a question such as mine could garner a down vote… but long ago I learned the folly of expecting wide-ranging logical behavior from people.] 🙂

It boggles my mind that someone pays this fool/tool to write such tripe.

While several people have offered Justice Ginsberg their lungs, producer Michael Moore has offered a pair of chins.

I just spit all over my monitor. That’s hilarious.

Cloning and Taxidermy TO THE RESCUE

A new take on cap and trade?

I have words: Cold. Calculating. Pretentious.

An abortion rite? At the twilight fringe? Planned for the Ginsburg.

“No her life has no more value than any other life.”

This is the only real answer to that question.

What kind of booze are they drinking over there at Politico? OR, are they just so full of their own ‘virtue’ they’ve abandoned common sense?

I am not going to live one day longer, or one day less, than the Good Lords wants me to, and neither will she.

The wicked witch is melting.