Salvini set to build an anti-establishment alliance ahead of the May election. 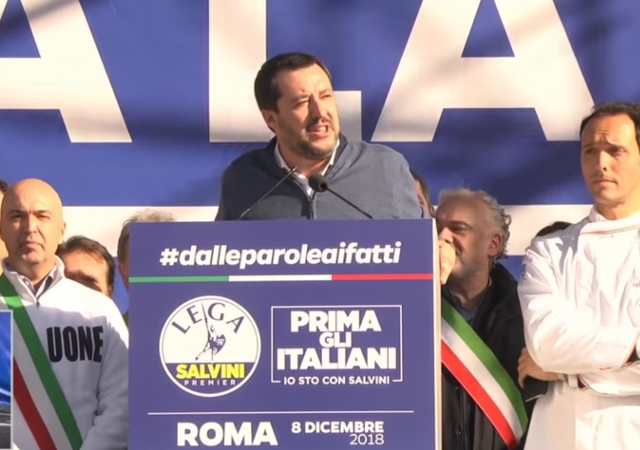 The leader of the Italian League party, Matteo Salvini, plans to form an electoral alliance with Poland’s ruling conservatives in the run-up to the upcoming European Union elections. Salvini is spearheading a campaign to build an anti-establishment alliance ahead of the election. In October, he teamed up with Marine Le Pen’s newly-formed French National Rally (NR) to launch the “Freedom Front” coalition.

Salvini will meet the leader of Poland’s Law and Justice (PiS) party, Jarosław Kaczyński, on Wednesday to “strike a deal” ahead of the EU parliament elections scheduled for this May, the public broadcaster Radio Poland disclosed.

The Radio Poland reported the upcoming meeting between Salvini and Polish conservatives:

Salvini, who is also deputy prime minister, is the leader of the right-wing League party, one of the two in Italy’s ruling coalition.

Italian daily la Repubblica reported on Thursday that Salvini and Kaczyński would discuss striking a deal ahead of elections to the European Parliament in May.

Salvini’s strength lies in delivering on popular election promises made to the Italian voters. According to the figures published this week, the illegal immigration to the country went down by 80 percent in 2018, which was one of Salvini’s key election promises. With Italy closing its doors, Spain is now the top destination for illegal immigrants where the socialist government of Prime Minister Pedro Sánchez has fully embraced the EU’s open border policy since taking office in June 2018.

The tie-up with Salvini has boosted Le Pen’s popularity in opinion polls with National Rally overtaking French President Emmanuel Macron’s En Marche for the first time since the May 2017 presidential election.

The current EU parliament, with its total strength of 751, is dominated by pro-establishment parties, where Merkel’s European People’s Party (EPP) holds 215 seats and the left-wing Party of European Socialists (PES) have 191 members. The EU runs an elaborate system of patronage by handing out commissariats and civil services positions to both of these loyalist groups.

Presently, anti-establishment parties have a tiny footprint in the EU parliament. The Le Pen-led parliamentary group, the Europe of Nations and Freedom (ENP), has a membership of only 35 members.

During this election cycle, Brussels faces a formidable challenge from the nationalist parties and anti-EU movements gaining ground all across Europe. The recent successes scored by Germany’s AfD party, Austria’s Freedom Party (FPÖ), and Italy’s League in their respective national elections indicate the shifting of popular support away from the political establishment entrenched in the EU’s patronage system.

The EU’s woes don’t just end there. The alliance between the conservative and the left-wing anti-EU parties forged by Salvini in last year’s Italian election could spell doom for the EU if engineered at the European stage.

The ruling elite in Brussels and Berlin are aware of the challenge facing them this election cycle. “There will certainly be very tough election campaigns for the European elections,” Chancellor Merkel predicted in August. If the anti-establishment parties manage to set aside their political differences and turf wars before the EU election, they could upend the power balance in Brussels for the first time in the bloc’s 60 year history.

Repeat after me: “Effective immediately, I hereby invoke Artle 50 and withdraw from the European Union.”

The guy in the right looks like he is in a strait jacket. Is he the EU rep?

The Eu should be scrapped in toto and be replaced with a democratically elected group with emphasis on trade agreements, not open borders and socialism.