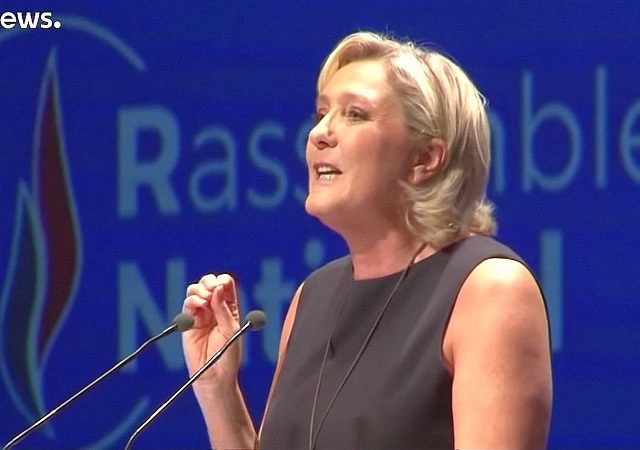 France’s ruling party’s plummeting poll numbers are linked to President Macron’s own dismal approval rating. Last week’s YouGov poll showed his popularity dropping to its lowest level since he took office eighteen months ago, with only 21 percent of the French voters supporting him. A series of high-profile scandals surrounding the presidency, along with high youth unemployment and rising cost of living have fueled popular discontent against the Macron administration.

Polling agency Ifop asked 1,000 people how they would vote if the EU elections were held today.

The RN’s 21%, together with the 7% of Nicolas Dupont-Aignan’s Debout La France (Stand up France) party and 1% each for Florian Philippot’s Les Patriotes and François Asselineau’s pro-“Frexit” Popular Republican Union gave 30% to far-right parties combined.

In the current EU parliament, of the 751 seats, Le Pen-led parliamentary group the Europe of Nations and Freedom (ENP) has close to 30 members. The combined strength of right-wing parties critical of Brussels is estimated around 200 parliamentarians.

So far, the European political landscape has been dominated by pro-establishment conservatives — spearheaded by German Chancellor Angela Merkel’s Christian Democratic bloc — or the equally pro-EU Socialist parties. This election cycle, the EU ruling elite face stiff electoral challenge from anti-establishment parties from the right and left. Recent elections have seen the emergence of nationalist parties across the continent, with Germany’s AfD, Austria’s Freedom Party and Italy’s Lega managing to pull large number of voters away from the mainstream parties.

We will know how serious a threat Le Pen’s party is to the establishment when they move to ban it as being right wing extremist. Can’t allow the jacquerie an actual say in government.

Go Marine. Hope she will someday be able to send Macron and his elderly mommy-wife into retirement. They can take their millions and go live in some guarded enclave where they’ll never have to worry about encountering any of those hostile muzzie invaders they helped bring into France.

They’ve got their own cucks. The establishment will outlaw her party before they allow her in power.

So no mention of the hate speech case against Le Pen, the court-ordered psychiatric assessment she claims she will resist, and the possibility of trying to run her party from a prison cell? Assessment aside, her freedom to participate in politics is not up to her. I find it curious this is not mentioned, and found it just as curious when not mentioned by a different blog a couple of days ago.

The “hate speech” you are referring to are these tweets?

WaPo “One of the images showed the decapitated body of James Foley, an American journalist captured by militants in Syria in 2012 and killed two years later. Another showed Lt. Muath al-Kaseasbeh, a Jordanian pilot, being burned alive inside a cage. The third showed a man in an orange jumpsuit being crushed by a tank.”

For those unclear on context, her opponents likened conservatives to jihadists, so she tweeted these pics to show was actual jihadists do.

Does anyone else think that the European people’s adjustment from Merkel et al haz taken much longer than it should have?

It’s as if the Ents are finally opening the floor to debate on forming a committee to report on the need to have a meeting.

What am I missing? Brexit is being slow-rolled too.