“We fight against the European Union to save the true Europe,” says Le Pen. 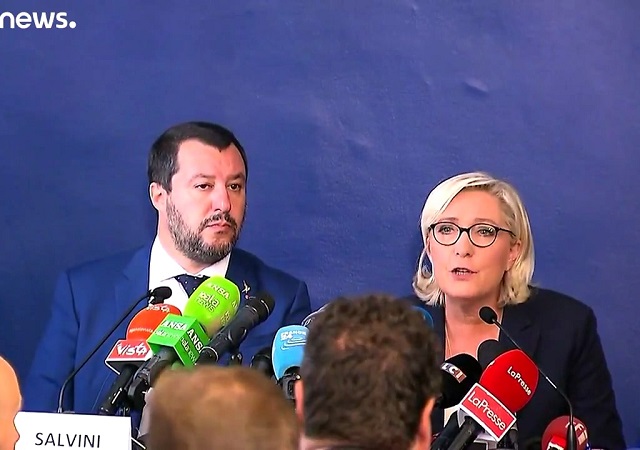 France’s nationalist politician Marine Le Pen and Italy’s Deputy Prime Minister Matteo Salvini have announced plans to create a “Freedom Front” electoral coalition ahead of next year’s European parliamentary vote. Speaking with Le Pen at a press conference on Monday, Salvini called for a “common sense revolution” to defeat EU’s political elite in the May 2019 elections.

“Europe’s enemies are those cut off in the bunker of Brussels,” Italy’s League party leader Salvini told reporters. “The Junckers, the Moscovicis, who brought insecurity and fear to Europe and refuse to leave their armchairs.”

Responding to a question about the role of the US conservative strategist Steve Bannon’s Brussels-based foundation called The Movement in the run up to the election, Le Pen said that his foundation “will offer studies, surveys and analysis … but the political force behind the EU elections is only us and us alone.”

“Because we are attached to our liberty, attached to our sovereignty and we together, the representatives of the different peoples of Europe, are the ones who will shape the political forces that aim specifically to save Europe,” she added.

During a press conference in Rome earlier today, Salvini called EU Commission President Jean-Claude Juncker and Economics Commissioner Pierre Moscovici as the “enemies” of Europe, barricading themselves in the bunkers of Brussels and refusing to leave their post.

Salvini referred to Juncker’s austerity measures as to why Europe is facing fear and job insecurity.

Both Salvini and Le Pen predicted that the European Parliament elections in May 2019 will bring about a dramatic change in the European political landscape with the populist vote. Both countries are dealing with high unemployment and migration and want to see these two problems rectified with more jobs, less austerity, and less open borders.

Alliance with Le Pen brings Salvini closer to his aim of creating a pan-European coalition. Hungarian prime minister, Viktor Orbán, has already pledged his support for Salvini’s efforts. “European elections are coming. We have to change a lot of things,” Orbán said late August. “There are two sides at the moment in Europe. One is led by Macron, who is supporting migration. The other one is supported by countries who want to protect their borders. Hungary and Italy belong to the latter.”

In the current EU parliament, of the 751 seats, around 150 are occupied by parties critical of Brussels. Le Pen’s parliamentary group the Europe of Nations and Freedom (ENP) has the support of only 36 members. Presently, the pro-establishment center-right European People’s Party (EPP), to which Chancellor Merkel’s CDU also belong, dominates the political landscape in Europe. But the recent emergence of Germany’s AfD party, Austria’s Freedom Party (FPÖ) and Italy’s League indicate a drastic shift of popular support away from the established parties.

European ruling elite are aware of the challenge posed by the anti-establishment parties this election season. “There will certainly be very tough election campaigns for the European elections,” Merkel admitted recently. If the right-wing parties manage to present an united front in the EU election next spring, they could succeed in disrupting the bloc’s power balance for the first time in its 60 year history.

In this matter, the two of them ain’t wrong.

If this new bloc looks like it will disrupt the EU Parliament the establishment will find a way to purge them.

On a different scale, to be sure, after fifty years of some success at clearing away ancient, national animosities enabled mightily by Ronald Reagan and Pope John, this has overtones of trying to clean out a ‘deep state’ and create a European version of the electoral college.

So called refugees represent many problems. They have high reproductive rates, at the expense of their host countries. The rest of their productivity is low. They do not assimilate. Their culture is primitive and barbaric.

Now they need to figure out how to get rid of the refugees they already have.

Rather than spending money on supporting refugees they should implement incentives to increase the number of children from their citizens.

We need to figure out how to eject the illegal aliens among us.

notamemberofanyorganizedpolicital in reply to JusticeDelivered. | October 10, 2018 at 3:41 pm

That’s one of their official plans for take-over.

Just last the Christian Lebanese, and the Israelis……

If short-sighted Trump supporters hadn’t driven him out, Bannon could’ve been organizing an anti-establishment movement here in the U.S. instead of Europe.

But considering the number of RINOs Trump endorses, I think I can see why Bannon had to go.

Bannon HAD BEEN organizing an anti-establishment movement in the US. But, his private war with Jared Kushner was too far for Trump. And, apparently, Kushner was pivotal in a number of major foreign policy issues, including the NAFTA renegotiation, the Israel embassy relocation and a bunch of others. He was the man people knew had the ear of the President who could be spoken to in order to break logjams, and actually did something with the role.

So let’s not cry too much for Steve Bannon, driven out not by Trump “supporters”, but by Donald Trump himself.

Oh, I agree. It was Trump who drove him out. It’s also Trump endorsing squish RINOs left and right like Mitt Romney.

I’m not a political scientist, but that seems like a good way to end up with a lot of RINOs in the Congress.

Bannon lost his luster by a considerable mark after the Roy Moore debacle……one has to question why he went out on that limb as far as he did or pushed Trump on it as hard as he did.
That being said, he still has a good nose for what needs to be done, even if Javanka gave him the shiv; and if he is helping some of our European friends, then I say,”Bravo!”
Italy needs to be rid of the EU…..but I fear that too many of her politicians are feeding out of the EU trough.

“Bannon privately charges that Kushner urged Trump to back Strange in an attempt to curry favor with Republican lawmakers, an Alabama political operative with knowledge of the situation told TheDC.

According to the operative, the president agreed with Kushner and called Strange out of the blue to let him know he had Trump’s backing. After Bannon and other advisers found out about the endorsement, the operative told TheDC, they informed Trump that Brooks was his guy and he shouldn’t be backing Strange.”

According to this account, Bannon only backed Roy Moore AFTER Brooks lost in the first round of primaries. He backed Moore as a last resort because he wouldn’t back Luther Strange; a man so corrupt that Alabama voters chose Moore over him.

Gee, maybe the locals had better information about the candidates than outsiders did.