Travis Justin: “it is in the best interest of Draft Beto for me to part ways for now.”

A video of Bernie Sanders shirtless, drinking, and singing on his honeymoon in the Soviet Union in 1988 was a quick internet hit for about a day, two days ago.

We covered it, Obligatory “Bernie Sanders on honeymoon drunk, half-naked and singing in Soviet Union 1988” video:

The surest sign that Beto is running is that a leader of “Draft Beto 2020” just shared a video of Bernie Sanders on his honeymoon in the Soviet Union 1988:

“Recently discovered footage from 1988 reveals a shirtless Bernie Sanders with his wife, Jane, on their honeymoon in the USSR, drunkenly signing “This Land Is Your Land” with a group of presumed Soviets.”

So many tweets get deleted these days, I’ve gotten in the habit of screenshotting tweets and archiving them at archive.is or archive.org, and I did for the tweet in question. 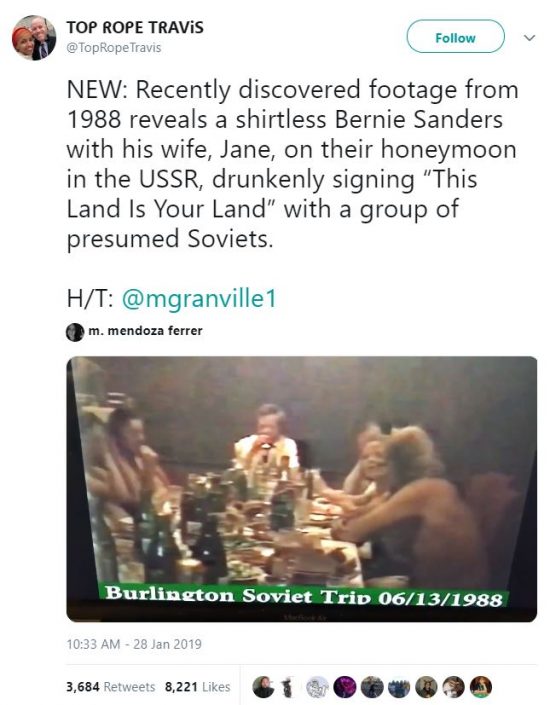 The tweet got the author in some trouble, and he resigned from his role at Draft Beto.

A leader of a group pushing for a 2020 presidential run by Beto O’Rourke has quit after circulating a newly discovered video of a shirtless Sen. Bernie Sanders, I-Vt., singing “drunkenly” during a trip to the Soviet Union in 1988.

The biography and picture of Travis Justin, who was director of Veterans Outreach, was removed from the Draft Beto 2020 website after he tweeted the video, saying: “Recently discovered footage from 1988 reveals a shirtless Bernie Sanders with his wife, Jane, on their honeymoon in the USSR, drunkenly singing ‘This Land Is Your Land’ with a group of presumed Soviets.” The tweet was later deleted but a screenshot was captured.

Justin, a Navy veteran who had been listed as part of the Draft Beto 2020 team of leaders, told the Washington Examiner that he “made the decision and informed the group today” that he believed “it is in the best interest of Draft Beto for me to part ways for now.”

“At this time, I determined it best to temporarily separate myself from Draft Beto. I did not want to become a distraction or detriment to the tremendous work being done by the team,” Justin said. “Draft Beto has a strict policy against negativity towards other Democrats and sharing the video was perceived as negative by some.”

He insisted he did not intend to denigrate Sanders by posting the video, and the he wants to “elevate Democrats” and “lift the ideas of Democrats, including Sen. Sanders.” He said: “Draft Beto strongly supports candidates singing, whether it be in a punk rock band, karaoke, or shirtless if they choose.”

Don’t feel sorry for Justin, though. 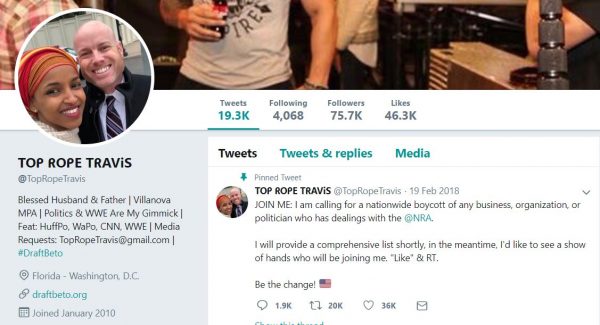 … I would like to provide clarification in order for the article to be more accurate.

As you know, I shared a video of Bernie Sanders, originally posted by another Twitter user, who discovered it from the Burlington community television archives. I shared that user’s video as an individual, not as a part of my association with Draft Beto. Draft Beto has a strict policy against negativity towards other Democrats and sharing the video was perceived as negative by some. I have since deleted the post as you noted. It brought unfair negative attention to Drato Beto considering it was not endorsed by the group or discussed with them prior to my sharing the posted video.

As I shared in my conversation with The Washington Examiner, it is Draft Beto’s intent and desire to elevate Democrats and for the 2020 primary field to have the most qualified and energetic candidates as possible, which is why I believe in Beto O’Rourke and other candidates who have already declared. I continue to encourage Beto to enter the race and in the meantime will also lift the ideas of other Democrats, including Sen. Bernie Sanders, while awaiting his decision.

I know you and I have vast differences in political ideology, but I also know you value accuracy in reporting as many national outlets reference your work on a consistent basis. That said, Draft Beto is a group comprised completely by unpaid volunteers. As Chief Strategist Boyd Brown stated in the Washington Examiner article, anyone can come and go as they please. The tweet did not “get the author in some trouble,” as you suggested. I took it upon myself to step away so as to not bring discredit upon the great things they are doing.

There may be a time in the future where I have the opportunity to return once again, but for now it was best for me to depart.

Scamming the headline, I misread it as “Daft Beto Leader…”

It still made perfect sense!

This headline is not a scam~

Draft Beto has a strict policy against negativity towards other Democrats

Uhh, right. But what does that have to do with Senator Sanders (I-VT)?

I don’t know why anyone would think this video is any weirder than most of the stuff the Democrats do every day.

Has this Draft Beto Credo been articulated properly here? If so, I would think twice about the nobility of this organization.

Think about it: Someone needs to resign not about posting something negative but something that specifically paints a Democrat in a negative light. In other words, it’s not about staying above the fray and being positive. It’s about saving your mud slinging for the right targets. Their credo might as well be the ends justify the means and group think reigns supreme.

I didn’t realize someone could have the physique of Bernie in that video, and still not be bedridden.

Ha ,, the demoCraps don’t want anything Negative said about them but will go to the end of the Earth to say Lies, Hate and Deceit about Republicans/Conservatives/Christians. It’s time We The People take the gloves off and give them a Wood Shed moment !!!

Damage done, cut and run! Let’s see how long he stays away though from any of the campaigns!

And now Crazy Bernie joins “Chameleon Horizontal Harris” as a loser in the early rounds of the 2020 Presidential Campaign Sweepstakes with Hillary “The Coronation Queen” Clinton and Lieawatha Warren hoping for a speaking spot at the Demtard Convention, they are so far gone. Next should be Cory “Spartacus” Booker.

What,one Commie can’t goof on another.

Bernie Sanders is selling socialism to you, young and old Americans, a failed ideology of violence, confiscation of property and land, starvation, poverty, political oppression, and loss of freedom. There is no equality, compassion, and social justice under socialism and communism. There is no social justice at all, just exploitation of the weak and disarmed.

“These days, the American dream is more apt to be realized in South America, in places such as Ecuador, Venezuela and Argentina.” – Bernie Sanders.

Thank a teacher …
“… might be forgiven for not knowing the horrors of socialism. Some of their beliefs represent their having been indoctrinated by their K-12 teachers and college professors.”

Our Ignorance of Socialism Is Dangerous
https://www.dailysignal.com/2018/12/05/our-ignorance-of-socialism-is-dangerous/

Socialism Up with Increased Ignorance
By Onar Åm | Jul 19, 2018
https://www.libertynation.com/socialism-up-with-increased-ignorance/

These people cannot exist in a Constitutional Republic that limits the power of government over the people.

“Today’s young and historically illiterate American socialists and leftists do not realize how they are echoing the apologias for Stalin’s defenders so many decades in the past. They take pride in their reflexive anti-Americanism, tweeting and arguing that America is trying overthrow a revolutionary democracy.”

“When Will They Ever Learn?”

I have a feeling that “Beto” will end up dodging his own draft.

Look at the arms on that thing.

Oh, O’Dork’s hatchetman professes that he “did not intend to denigrate Sanders by posting the video, and the he wants to ‘elevate Democrats'” and that the “Draft Beto strongly supports candidates singing”…WTF, Beto (the pretend Latino) supports candidates singing?! What a great platform position–I support people singing…wow! Now that really will Make America Great again…

So the hatchetman reveals just how sincere this platform of “Get America singing again!!!” by stabbing Ol’ Bernie in the back…

These are PETTY LEFTIST IDEOLOGUES who scurry like cockroaches when the light is shown on them!

When Bush Sr. was running Donna Brazile told the press he was having an affair. She then resigned as if she had done something against the rules. In fact Brazile was later rewarded, her resignation was a band aid for introducing the lie. Same deal here. Whoever called attention to it will be rewarded, the resignation is part of the plan. Who are these people trying to kid.