Trump on Elizabeth Warren: “You’d have to ask her psychiatrist” if she thinks she can win

Trump on Elizabeth Warren: “You’d have to ask her psychiatrist” if she thinks she can win 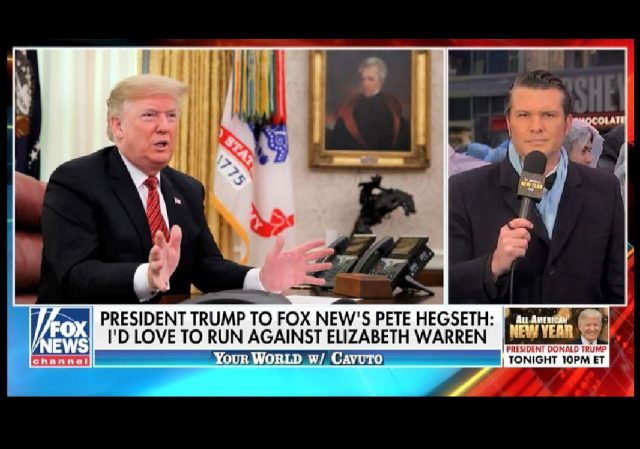 He introduced a new concept to his branding of her: She’s nuts.

In an exclusive interview set to air during Fox News’ ‘All-American New Year’ special Monday night, President Trump suggested that only Massachusetts Democratic Sen. Elizabeth Warren’s “psychiatrist” knows whether she thinks she can win the White House in 2020….

“Well, that I don’t know,” Trump responded. “You’d have to ask her psychiatrist” …

“Elizabeth Warren will be the first,” Trump told Hegseth in the phone interview. “She did very badly in proving that she was of Indian heritage. That didn’t work out too well.” …

“I think you have more than she does, and maybe I do too, and I have nothing,” Trump said, referring to tribal heritage. “So, we’ll see how she does. I wish her well, I hope she does well, I’d love to run against her.”

As with all branding, it only works if there’s a kernel of truth to it.

Trump had repeatedly branded Warren as a fake Indian by using the name “Pocahontas” for her. Now he’s suggesting she needs psychiatric help.

The claim of being nuts is made against Trump, but I have a feeling it will sting Warren more because Warren is not a flamboyant showman like Trump. Her entire political reason for being is that she is the rational, methodical technocrat. She also comes to the table with a low likability factor (likability is not the same as favorability, just ask Hillary).

The Democrat/liberal punditry already is worried.

…How does Warren avoid a Clinton redux — written off as too unlikable before her campaign gets off the ground?

In interviews with POLITICO, nearly a half-dozen current and former Warren advisers and associates acknowledged the rap on her, even as they dismissed it as little more than D.C. chatter. Any comparison to Clinton will recede, they said, once Warren hits the campaign trail in early states and weaves her own narrative in front of real voters. Amplified by an advanced video and digital operation her team has assembled over the past year-and-a-half, in part to help humanize her as a candidate, Warren will quickly remind people of her early years as an anti-Wall Street, pro-consumer crusader, they argue….

“Elizabeth is not that,” a onetime Warren adviser said of portrayals of the senator as cold or unlikable. The person was given anonymity to address the Clinton comparison frankly. “I don’t think it’s fair. I know her. I think she is a warm and affectionate person. Once she’s on the stump and gets going on her economic message, she’s quite good … Hillary had three decades’ worth of animosity — it was just the way the world had treated her — that had built a crust around her that you really couldn’t penetrate. I don’t feel like Elizabeth has that kind of edge to her.”

“All of us are just scratching our heads over why this is happening. She has a great operation, she’s very smart about it all,” added Warren’s biographer, Antonia Felix….

The Atlantic wonders if Warren can escape Hillary’s legacy, Elizabeth Warren Doesn’t Want to Be Hillary 2.0:

An odd thing happened to the woman who came onto the scene as an anti-banking, anti-establishment, burn-down-the-castle revolutionary: Elizabeth Warren became the castle….

Warren’s team doesn’t like the Clinton comparisons. They see any of that talk as reeking of sexism, people seeing one woman as the same as another woman because of their gender and aspirations. But so far, at least, the Clinton comparisons aren’t being made about any of the other women who have been just as obvious in recent months about their 2020 intentions.

By launching first, Warren gets ahead of the rest of the salivating pack of Democratic presidential hopefuls. In an ideal world, being first in would lead to a bounce from a cycle of flattering news coverage. But it’s New Year’s Eve, and most people are focused on anything but presidential politics. Plus, the early reviews from the press are far from flattering, littered with references to her unproven claims of Native American ancestry….

So why go today? As former Obama communications director Anita Dunn told the Boston Globe, Warren “had what I think many people believe was a very rocky fall.” Standing still meant the risk of getting lumped in with all the other looming presidential announcements, and potentially never making it out of the starting gate.

Warren begins her journey in a position of weakness. Unlike 2016 when activists were begging her to run with DRAFT WARREN movements, the Massachusetts Senator feels like yesterday’s news. Polls indicate that Democrats are in the mood for a fresh face, with a survey from USA Today/Suffolk University last week showing voters “excited” about a potential candidate that is “someone new.”

Like Hillary, Warren is just too prepackaged, too contrived, too controlled by handlers, and comes across as stale and unlikeable. The New Year’s Eve Day rollout of her campaign, like the pre-midterms rollout of her DNA test, is a good case in point.

She also singled out Fox news.

And the hall monitors of course called her out for this language which is a direct threat to press freedoms all around the world and undermines the first amendment norms of which are the very foundations of our constitutional republic. https://t.co/1iMjJyyt8X

I wonder if Elizabeth Warren will have as dramatic meltdown as Hillary when she loses?

Her entire political reason for being is that she is the rational, methodical technocrat.

It is? How so? If she was fresh off the job of, say, planning a canal project across Central America, or surveying the path of a transcontinental railroad, or supervising construction of a moon rocket, she’d have some techno-cred. But she’s never done anything like that. All she actually has going for her is fake Affirmative Action, and a lot of unconvincing talk to establish her as America’s second-string Socialist-in-Chief.

Her body language is very robotic, with all the “warmth” that entails.

That’s an insult to robots.

Didn’t The Trump announce in May or June of 15? Which means Warren is 4 to 5 months ahead of that. Now all we’ll hear about in media for the next two years is the presidential race and looming election. I hate that it’s become such a long, drawn out walking marathon.

That answer by Trump will show us just how thin that lily-white skin really is.

She’s now doing Instagram streaming from her kitchen, whilst drinking a beer and cooking

What’s next? – Smoking a blunt? Getting a tattoo? What a desperate piece of garbage.

Are there any democrat politicians who are not complete corrupt frauds?

What was it she helped set up? The Consumer Finance Protection Bureau? A slush fund for Leftist projects paid for by consumers. That was pretty “Progressive.” She is evil.

She staffed it with crazy socialists and crony bank agents and tried to make it a perpetual motion liberal government branch unaccountable to anyone one, including Congress. Of course our SCOTUS did not say a word.

Richard Cordray, Obama’s first slimy director of the CFBP, just tried to be our governor in Ohio. We promptly said “ hell no” to him.

Shrieking Crow will be looking for scalps. We will be laughing.

The stench surrounnding the corrupt pos is overwhelming.

The only difference between fauxcahontas and hillary clinton is…is…is… You know – there’s no difference!

True. But she’s just as slovenly about her body.

Gotta get my popcorn restocked in my pantry.

She announced her candidacy while drinking. I think she did it to look ‘relatable’ but it comes across as “mother’s little helper” than it does as folksy. Either that, or that really is how she makes here decisions, which is an unflattering position.

That’s why Trump’s jab has traction; it’s based in her behavior during her announcement.

“Like Hillary, Warren is just too prepackaged, too contrived, too controlled by handlers, and comes across as stale and unlikeable.”

This could be Warren’s CV, her resume and political epitaph. However, starting any sentence with “Like Hillary” could be indelicate 🙂

“Warren is just too prepackaged, too contrived, too controlled by handlers, and comes across as stale and unlikeable.” works very well!

Even pre-packaged crap has an expiration date.

I think if I was any more bored by Warren, I’d be dead.

Has she picked out her hunting vest yet?