If elected, she would be the first person who has committed an ethnic fraud to hold the presidency. 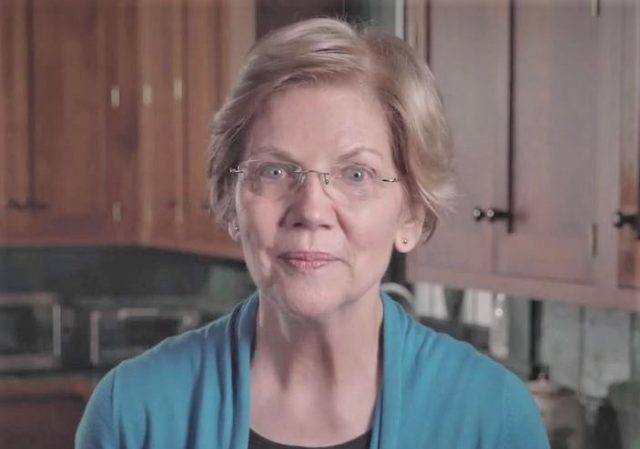 Elizabeth Warren surprised no one by announcing she has formed an exploratory committee to run for president.

The only surprise was the timing — New Year’s Eve day. As with everything Warren does, that timing undoubtedly was chosen by her team of political handlers, the same people who told her to roll out her DNA test results just before the midterms. It will be a slow couple of days and Warren will dominate the news cycle.

Warren is like Hillary Clinton, she does everything to pretend she is spontaneous and genuine, when in fact she is pre-packaged by political consultants.

If elected, she would be the first person who has committed an ethnic fraud to hold the presidency. See ElizabethWarrenWiki.org for the full background on Warren’s Native American deception, and other controversies that will resurface now that she’s running for president.

Just two days ago Warren changed the username for her campaign account from @ElizabethforMA to @eWarren.

The NY Times reports, Elizabeth Warren Announces She Is Running for President

In an 8:30 a.m. email to supporters on New Year’s Eve — 13 months before the first votes will be cast in the Iowa caucuses — Ms. Warren said she was forming a exploratory committee, which allows her to raise money and fill key staff positions before a formal kickoff of her presidential bid. Ms. Warren also released a video that leaned on the populist, anti-Wall Street themes that are sure to be central to her campaign message.

“I’ve spent my career getting to the bottom of why America’s promise works for some families, but others, who work just as hard, slip through the cracks into disaster,” she said in the video. “And what I’ve found is terrifying: these aren’t cracks families are falling into, they’re traps. America’s middle class is under attack.”

Just like with the DNA test, Warren released a slick video for the announcement:

Warren apparently is incapable of seeing the irony of her launching a campaign theme focused on helping people who play by the rules. 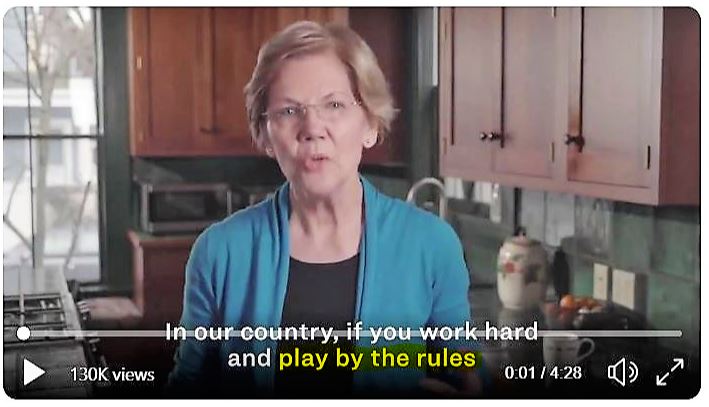 Elizabeth Warren might win, I don't know, 23 and me states.

I’ve been wrong in my political prognostications before, heaven knows — but if I were Team Trump, I’d be rooting hard for an Elizabeth Warren nomination. Such a nomination would spur every right-leaner in the country to the polls. Plus, I think she missed her moment in ‘16. FWIW. https://t.co/lBaZtcGMbm

Warren held a press conference outside her Cambridge, MA, home. notice she did it near the garage, so you can’t see much of the house. This house is worth several million dollars and Warren tried to hide that fact during the 2012 Senate campaign. She would only allow reporters to interview her inside the house is they agreed to treat the inside as “off the record” — so they could not describe it in their news reports.

Trump responds to announcement: “I’d love to run against her” and only “her psychiatrist” knows if she really believes she can win:

Who cares? She’s a habitual liar and fraud.She thinks this announcement will be all the news anyone hears thanks to slow news days. Who is watching the news anyway? Everyone is celebrating the new year.

Has she announced she is paying back the College Financial Aid she took under her fraudulent claim that she was Native American?

The statute of limitations for fraud has probably already expired, so I doubt she’ll bother doing that.

We can probably expect her to release her biography soon. “Fifty Shades of White”?

Thanks for the laugh Phil.

As our old friend Gomer Pyle would say “Shazam! Surprise, Surprise, and Gollee! “

Sickening news, but no surprise at all.

Just wait until she accepts the VP position on Biden’s ticket for President. She’ll suck in a lot women who vote their vagina. Biden croaks after 2-3 years and she ends up to be America’s first woman President.

Interesting forecast but if the top of the Dem ticket is to be an old white guy then the VP would absolutely have to be a woman of color… oh wait.

“Warren is like Hillary Clinton, she does everything to pretend she is spontaneous and genuine, when in fact she is pre-packaged by political consultants.”

As an aside, I think Hillary is pre-packaged by [i]nature[i].

Speaking of ol’ Hill, I wonder how’s she taking the news?

I see she’s in her kitchen; was she whipping up some Oklahoma crab dip?

Want to bet it’s not really her kitchen LOL. Nothing else about the ol’ girl is real….

One hope to hold onto if any of these losers actually get elected is that their incompetence may hinder them from doing lasting damage to our Republic. Getting elected to the Senate from cesspools like Massachusetts or California hardly seems to be an accomplishment. What else has she done (aside from lying to advance her career)?

She has published a ton of nonsensical research on personal bankruptcies which has been well documented here and at the WSJ.

And her tax returns show that despite she and her husband making at least a million a year for several years now they give almost nothing to charity.

America’s middle class is under attack.

True, and supporting MILLIONS UPON MILLIONS of 3rd-world INVADERS [no, they are not immigrants], a tenet of the dem party, doesn’t help the American citizenry middle class.

To hell with her.

Is it me or does it look like the kitchen is a superimposed background? It certainly would go along with how fake she is.

It does sort of look like a green screen background.

Guess Paul Revere and Raiders will be coming out of retirement after all.

A few of the stunning democrat ’20 candidates:

Feel free to add and embellish.

Kowabunga, Walking Eagle (a bird so full of crap, it can’t fly), this is heap good news. Too bad winds of Slow Joe blew away smoke signals. Do not worry, I see at least 20-21st place finish. Reprint them cookbooks!

“I’m concerned that a Warren presidency would increase tribalism in American politics.”

“Her exploratory committee managers are Lewis and Clark.” –

Why does a politician claim to be for everyone when it’s obvious she does not?

Does “stronger together” include irredeemables?

Warren once seemed authentic. Now she seems as fake as a $3 bill.

“Stronger Together”…. hum… sounds like a rehash of the Spanish Phalangist Party… or visually the emblem of the Italian National Fascist Party. Either way, representative of Warren and her Party.

I am shocked, I tell you. Simply shocked. So shocked that I am speechless. I can’t talk. I have no words. I am stumped, befuzzled, begozzled, bewondered, and bewildered. Just shocked. I never in all my born days saw this coming. It’s the end of Trump. It’s the end, I tell you, the end. L

Great photo up top. She looks like one of those pasty-faced “living dead” types in The Omega Man.

Let’s turn the presidency into a participation award… any and every Democrat candidate can be “President for a Day” if the Party wins. This will make it possible to have virtually every minority be the historic “first”.

I would require that during this participation fest that the White House utilize only its grounds to provide renewable energy and recycling for all its needs. Make the White House self-sufficient and energy independent…. the only limit is that they have to work and live within its production.

I can hear DJT on the presidential debate stage saying to Warren, “Look at that face”! Fiorina was a beauty compared to hatchet face.

Will her answer for the failed middle class people of America be like her own to get special treatment. Impersonate a favored minority to achieve benefits and privileges beyond your due? But never, ever submit to a DNA test unless you want to look really stupid.

Even whiter than Hillary

And without the bubbly personality

Well, THAT made me laugh!

I saw an Indian like her in a movie. Joey Bishop in Texas Across the River except he was more believable. I think that movie was how the navy got us to look forward to getting into a Seaknight and going ashore to visit with the NVA.

What a great person to represent the socialist party. She will trash more money than J’Obiden on a European vacation and make Cory Crooker’s stories almost seem believable.

Sure hope that Howie Carr has a book already in the works!

Elizabeth Pimpletongue Warren. You have to hand it to her, for she knew how to game the system in order to get a plum professorship.