The concern over the backstop means the Brexit deal faces defeat. 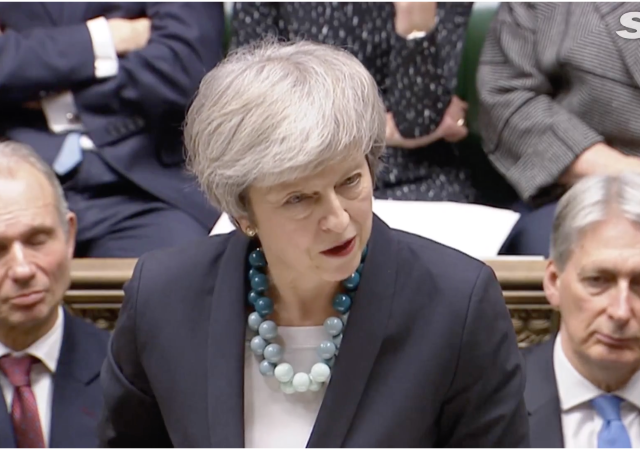 British Prime Minister Theresa May has told the House of Commons that she will defer the vote tomorrow for her Brexit deal after many within her own party wouldn’t support her deal due to the backstop.

The Guardian reported that “the backstop is a device intended to ensure that there will not be a hard border between Northern Ireland and the Republic of Ireland, even if no formal deal can be reached on trade and security arrangements.”

May Addresses House of Commons

She says that after three days of debate on the withdrawal agreement in the Commons and much discussion outside Parliament, it is clear that there is “broad support” for many of the key aspects to the deal.

However, there remains widespread concern about the backstop.

This would result in defeat for the deal, she says, were MPs to vote on it.

Therefore, she says the government has made the decision to defer the vote.

The first is over where it will apply. The EU wants the backstop to affect only Northern Ireland.

Even though the aim is for it to never come into force, Theresa May has ruled out the idea of separate customs arrangements for Northern Ireland and the rest of the UK – the so-called customs border in the Irish Sea – and it would be completely unacceptable to the DUP.

May has tried to argue that the backstop could apply to the whole of the UK, but this angers Conservative MPs, who dislike the idea of the country being tied to EU rules in the long term.

The UK has sought to make the backstop time limited, but Brussels argues this is impossiblebecause the guarantees it offers are needed for as long as an alternative solution is not found.

May addressed the backstop. From the BBC:

Theresa May says the backstop is a necessary guarentee to the people of Northern Ireland and there is no deal available that does not include the backstop.

She says there are inescapable facts: that Northern Ireland has a border with another sovereign state, that hard-won peace has been built in Northern Ireland over the last two decades over a seamless border, and that after Brexit, the Northern Ireland/Ireland border will be the external frontier of the EU’s single market and customs union.

“These challenge posed must be met not with rhetoric, but with real and workable solutions,” she says.

The prime minister says: “The people do not want a return to a hard border, and if this House cares about preserving our union, they must listen to these people, because our union will only continue with their consent.”

Theresa May says she hopes the changes made will ensure people that the UK will never be trapped in the backstop arrangement permanently, and that the EU won’t want it to come into use or persist for long.

The Guardian reported that May held a phone call with her Cabinet earlier this morning and came to the conclusion “she could not win over enough of the 100 Tory MPs who said they were against the deal.”

I am reliably told @theresa_may won’t put a date on how long she needs to renegotiate Brexit plan and therefore MPs won’t know when they will finally get their vote. This undated extension of talks will be no more acceptable to MPs than her undated Backstop. So…

…expect in just a few minutes the traditional booming explosions of outraged parliamentarians. But do they have the power to prevent her from having their say in a timely fashion on the Brexit she shape? As I said yesterday real deadline is 21 Jan when under Withdrawal Act…

…PM HAS to present a Brexit plan to parliament

European Court of Justice Ruled Brexit Can Be Canceled

What a shock. The European Court of Justice ruled that Brexit can be canceled. From The London Times:

In a victory for Remain campaigners seeking to reverse Brexit, judges at the European Court of Justice have given MPs a new option to unilaterally revoke the EU’s Article 50 withdrawal process.

“The United Kingdom is free to revoke unilaterally the notification of its intention to withdraw from the EU,” the court said in a statement.

“Such a revocation, decided in accordance with its own national constitutional requirements, would have the effect that the UK remains in the EU under terms that are unchanged as regards its status as a member state.”

As a result of the judgment — against which there can be no appeal — MPs can cancel Brexit after either a second referendum or a parliamentary vote without any threat to Britain’s annual rebate to the Brussels budget or opt-outs from the euro or the EU’s Schengen open borders area.

EU judges ruled that if the government sends a letter to the European Council of Europe’s leaders, with any attached conditions, then the withdrawal procedure can be stopped before Brexit day on March 29, 2019.

“The revocation must be decided following a democratic process in accordance with national constitutional requirements. This unequivocal and unconditional decision must be communicated in writing to the European Council,” said the ECJ statement.

“Such a revocation confirms the EU membership of the member state concerned under terms that are unchanged as regards its status as a member state and brings the withdrawal procedure to an end.”

I blogged about May’s deal, which she unveiled in November. CBS News provided the details:

Transition period: Britain will leave the EU on March 29 but remain inside the bloc’s single market and be bound by its rules until the end of December 2020, while the two sides work out a new trade relationship. The transition period can be extended by joint agreement before July 1, 2020 if both parties decide more time is needed.

Irish border: The deal commits the two sides to a “backstop” solution to guarantee the border between EU member Ireland and the U.K.’s Northern Ireland remains free of customs posts or other obstacles. It keeps the U.K. in a customs arrangement with the EU, and it will last until superseded by permanent new trade arrangements. Both sides said they hope to have a new deal in place by the end of 2020, so the backstop is never needed.

Divorce bill: Britain agrees to cover contributions to staff pensions and commitments to EU programs the U.K. made while a member for the funding period that runs to 2020. The bill has previously been estimated at about 39 billion pounds ($50 billion).

Citizens’ rights: EU citizens living in Britain, and Britons elsewhere in the bloc, will continue to have the rights to live and work that they have now.

The seven-page political declaration says Britain and the EU will seek a “free trade area combining deep regulatory and customs cooperation,” and “ambitious, comprehensive and balanced” arrangements for the services sector.

Details will be worked out after the U.K. leaves the EU on March 29.

May promised that her government “will deliver Brexit” and that the UK “will not rerun the referendum.”

Some in her party found fault in her proposal. They believe it “leaves Europe with too much control over Britain’s trade and borders, certainly if the U.K. remains for any considerable period part of the bloc’s customs union.” They claim that this move “would betray the British public’s will after the majority voted to leave the EU.”

Environment Secretary Michael Grove said on Radio 4 Today program that the deal can improve “and the prime minister has been seeking to improve this deal.” Up until now, those rebels within the Tories believed “that this is the best possible deal.”

The House of Commons delivered May three defeats on December 5. From CNN International:

In little more than an hour on Tuesday, the government suffered three defeats on its Brexit plans. The first two were embarrassing enough: MPs voted that the government was in contempt of parliament, the first time that’s happened in British history. By refusing to publish in full the legal advice on the Brexit deal agreed with the European Union last month, ministers were found to have breached the sovereignty of parliament — and parliament has fought back and reasserted its control.

The third defeat, while more technical, was still hugely significant because it means that next Tuesday, MPs from all parties can decide not only to reject May’s deal but instruct the government on what to do next.

The Labour Party made it known that they are ready for another election. The Northern Irish DUP party feels the same way, even though they have an agreement to support the Tories in order for the Tories to remain in power.

This is why the DUP doesn’t like the plan:

The DUP opposes to May’s Brexit deal because it holds out the prospect of Northern Ireland operating on different regulatory and customs arrangements from the rest of the UK, in the event that future negotiations on a trade deal between London and Brussels collapse.

Why hasn’t she been removed from the PM position yet?

The answer is complex, enough I won’t bother with it. I suggest you stay tuned. She and all of her top people were saying this vote would not be delayed, period. Alas…

notamemberofanyorganizedpolicital in reply to JBourque. | December 11, 2018 at 5:45 pm

Kumquat May is a 2nd Guy Fawkes.

Perhaps she should meet the same fate as Guy Fawkes?

Just hold a vote of no confidence in May, then declare the No Deal option to be in effect and the UK to be free. It’s better than the remainer sludge May keeps trying to shackle the nation to.

In a sane world that is what should happen. However there are far too many politicians who want to continue being subservient to the EU.

Just make a notional hard border but don’t enforce it. Put signs on all the roads at the border stating that any goods taken across are subject to EU duties and it’s the individual’s responsibility to remit the duty to the EU. If the EU doesn’t like that then let them lump it.

In reality this whole backstop crisis is just a ploy by closet remainer May to torpedo Brexit.

It’s the EU that would be putting up the customs checkpoints, not the UK.

The Brexit vote may have been cancelled at the 11th hour and delayed for now, but this video, published yesterday, of Lord of the Rings actor and British citizen, Andy Serkis, reprising his role of Smeagol and Gollum but in the form of British PM Theresa May sure has been making the rounds since yesterday. And, man, is it ever creepy.

Comments aren’t very many compared to the number of views, but they’re rather brutal as well.

The “deal” May wanted s*cked.
UK should ONLY: #HardBrexit
Do NOT align with EU.
#BreakFree
#FireMayNow

This seems to be the error leading to all the excitement—

The prime minister says: “The people do not want a return to a hard border

Au contraire, a hard border is exactly what the people want, in fact what Brexit is all about. A border with the UK (including Northern Ireland) on one side, and the EU (including the Republic of Ireland) on the other. Anything else is just window dressing on the current EU Über Alles arrangement.

Brexit means a hard border somewhere, and Northern Ireland doesn’t want to be on the wrong side of it.

She’s a boehner/ryan/mccain/flake. We see how that worked out.