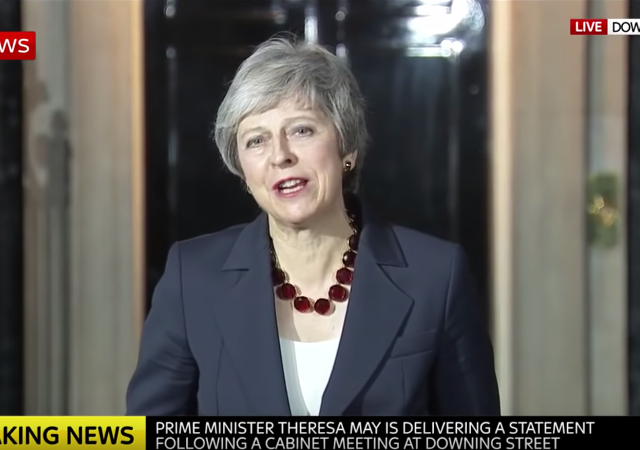 British Prime Minister Theresa May remains on shaky grounds after two cabinet members resigned a day after she announced that the cabinet backed her proposal on Brexit.

She has now lost a total of 12 cabinet members in the last year. From CBS News:

Dominic Raab, the second of May’s Brexit secretaries to quit the role in as many years, said the draft agreement reached with Brussels would effectively leave Britain beholden to the rules and regulations of the European Union and even give the EU the power to stop the U.K. from extricating itself down the road. He said he could not “in good conscious support the terms” of the deal he helped to craft.

All indicated that they could not support the almost-600-page draft deal May presented on Wednesday, which is considered insufficient by both Brexit backers and those who wanted to remain in the EU.

Writing to Mrs May, Mr Raab said: “I regret to say that, following the cabinet meeting yesterday on the Brexit deal. I must resign. I understand why you have chosen to pursue the deal with the EU on the terms proposed, and I respect the different views held in good faith by all of our colleagues.”

He said that he could not support the proposed deal for two reasons. “First, I believe that the regulatory regime proposed for Northern Ireland presents a very real threat to the integrity of the United Kingdom. Second, I cannot support an indefinite backstop arrangement, where the EU holds a veto over our ability to exit.

“The terms of the backstop amount to a hybrid of the EU customs union and single market obligations. No democratic nation has ever signed up to be bound by such an extensive regime, imposed externally without any democratic control over the laws to be applied, nor the ability to decide to exit the arrangement. That arrangement is now also taken as the starting point for negotiating the future economic partnership. If we accept that, it will severely prejudice the second phase of negotiations against the UK.”

He said that the deal broke promises made in the 2017 Tory manifesto. “Ultimately, you deserve a Brexit secretary who can make the case for the deal you are pursuing with conviction. I am only sorry, in good conscience, that I cannot.”

CBS News has a few details from the proposal:

Transition period: Britain will leave the EU on March 29 but remain inside the bloc’s single market and be bound by its rules until the end of December 2020, while the two sides work out a new trade relationship. The transition period can be extended by joint agreement before July 1, 2020 if both parties decide more time is needed.

Irish border: The deal commits the two sides to a “backstop” solution to guarantee the border between EU member Ireland and the U.K.’s Northern Ireland remains free of customs posts or other obstacles. It keeps the U.K. in a customs arrangement with the EU, and it will last until superseded by permanent new trade arrangements. Both sides said they hope to have a new deal in place by the end of 2020, so the backstop is never needed.

Divorce bill: Britain agrees to cover contributions to staff pensions and commitments to EU programs the U.K. made while a member for the funding period that runs to 2020. The bill has previously been estimated at about 39 billion pounds ($50 billion).

Citizens’ rights: EU citizens living in Britain, and Britons elsewhere in the bloc, will continue to have the rights to live and work that they have now.

The seven-page political declaration says Britain and the EU will seek a “free trade area combining deep regulatory and customs cooperation,” and “ambitious, comprehensive and balanced” arrangements for the services sector.

Details will be worked out after the U.K. leaves the EU on March 29.

May promised that her government “will deliver Brexit” and that the UK “will not rerun the referendum.”

Some in her party found fault in her proposal. They believe it “leaves Europe with too much control over Britain’s trade and borders, certainly if the U.K. remains for any considerable period part of the bloc’s customs union.” They claim that this move “would betray the British public’s will after the majority voted to leave the EU.”

The Conservative Party does not have the majority in the House of Commons, which could cause problems, especially since the party “relies on 10 lawmakers from Northern Ireland’s Democratic Unionist Party to win votes.” These members have vowed to vote against “any deal that treats Northern Ireland differently to the rest of the U.K.”

Attention has turned to “Sir Graham Brady, chairman of the 1922 committee of backbench Tory MPs.” The members of parliament await his announcement “that he has received 48 letters forcing a vote of no confidence in the prime minister.”

If enough of them reject the deal, “it could still lead to a challenge for the leadership of the party.” This means they could unseat May and form a new government through a snap election.