Republican Sen. Lamar Alexander Will Not Seek a Fourth Term in 2020

Republican Sen. Lamar Alexander Will Not Seek a Fourth Term in 2020

More than likely Republicans will keep the seat. 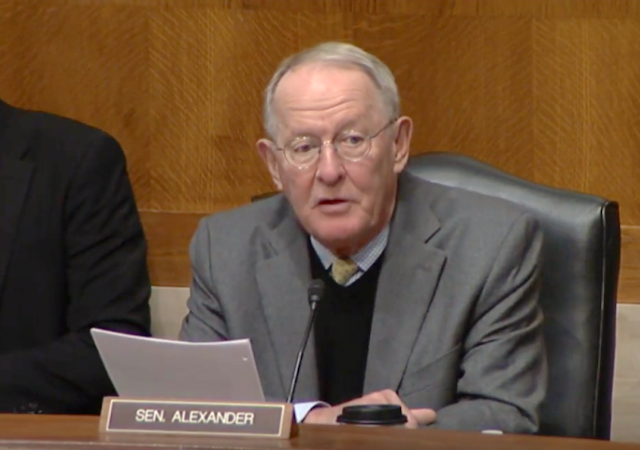 Sen. Lamar Alexander (R-TN) announced today that he will not seek re-election for a fourth term in 2020. From Politico:

“The people of Tennessee have been very generous, electing me to serve more combined years as governor and senator than anyone else from our state. I am deeply grateful, but now it is time for someone else to have that privilege,” the 78-year old Alexander said in a closely-held statement on Monday. “I have gotten up every day thinking that I could help make our state and country a little better, and gone to bed most nights thinking that I have. I will continue to serve with that same spirit during the remaining two years of my term.”

Alexander is widely respected by Democrats and Republicans, the rare senator who is close to both Senate Majority Leader Mitch McConnell and Minority Leader Chuck Schumer. With his retirement, the Senate will lose a key negotiating conduit during times of crisis.

Alexander serves as the chairman for the Senate Health, Education Labor and Pensions Committee. He will have two years to work on a compromise with Sen. Patty Murray (D-WA) on Obamacare because a federal judge in Texas ruled the law unconstitutional.

Alexander remains popular in Tennessee, but he would be on the same ticket as President Donald Trump. He’s not as moderate as Sen. Susan Collins (R-ME), but he isn’t as right-leaning as those who support Trump. He has supported legislation Trump hates, including “the 2013 bipartisan, comprehensive immigration bill.”

In more bipartisan approaches, Alexander didn’t “sign a 2015 letter to Iranian leaders undercutting President Barack Obama‘s efforts to reach a nuclear deal.” He dropped out of the Republican leadership in 2011 in order to “pursue more bipartisan legislating.”

Alexander’s retirement means Tennessee will lose more seniority in the senate since Sen. Bob Corker decided not to run again.

More than likely the seat will remain in Republican hands.

I don’t know that self-imposed, one-sided term limits is what we had in mind.

1. Those are the only kind that are consistent with the constitution.

2. This has nothing to do with term limits. The man will be 80. He’s had a good run; surely it’s perfectly reasonable for him to decide not to seek yet another 6-year term.

Here’s hoping they can find an actual conservative to replace him.

Lamar is a classic RINO, so no big loss with him leaving. Hopefully a real conservative who won’t get corrupted by Washington will fill his seat. Those are very, very hard to find.

Hey maybe more conservative Al Gore will fill the seat. I vote of Taylor Swift to shake it off.

Another RINO by the side of the road. Hopefully TN Republicans have another Marsha Blackburn type warming up in the bullpen, that is unless Taylor Swift objects to their LGBTQ (XYZ) policies.

One less RINO,hopefully they become Extinct in a supposedly conservative party.

The only “R” in this liberals resume is in his last name!

Long before there was “Jeb!”, there was “Lamar!” — I am surprised he is just now getting around to leaving.