Michael Avenatti, who proclaimed he “absolutely” could beat Trump, won’t run for President

Michael Avenatti, who proclaimed he “absolutely” could beat Trump, won’t run for President

Cuts and runs. Blames his family for the decision. What a guy.

With his characteristic bravado, Avenatti portrayed himself as someone who “absolutely” could beat Trump and would be Trump’s “worst nightmare”.

Just two days ago, Avenatti claimed his chances of beating Trump had improved:

Lawyer Michael Avenatti says his chances of running a successful presidential bid in 2020 “have only gone up” following his arrest on suspicion of felony domestic violence and public criticism from his highest-profile client, adult-film star Stormy Daniels.

“I think the field is shaping up to be even more advantageous for someone like me, not less,” Avenatti told Politico in an article published Sunday. “I think my chances have only gone up, not gone down.”

Avenatti elaborated in an email to The Hill, saying he is “still seriously considering” running for president.

“If the Democrats think they can beat Donald Trump without taking him on directly and aggressively, they are kidding themselves,” Avenatti said in the email. “Unfortunately, many of the likely candidates are simply not tough enough or battle tested enough to beat him.”

He just cut and run. And he blames his family for the decision.

Please see my statement below regarding 2020. pic.twitter.com/ztCfZUY6hA

Avenatti’s decision comes as we await a judge’s decision that may require Avenatti’s client, Stormy Daniels, to pay several hundred thousand dollars in legal fees for a frivolous lawsuit brought by Avenatti on her behalf and in which Avenatti’s conduct is at issue.

Avenatti also has been referred by the Senate Judiciary Committee for criminal investigation based on his representation of Kavanaugh accuser Julie Swetnick, and Avenatti faces a domestic violence complaint in Los Angeles from a woman who is not his wife.

But yeah, blame it on your family, chump. 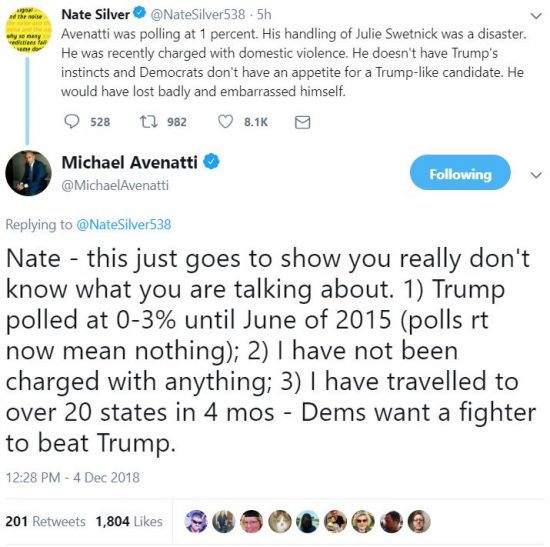 Not telling about next week.

Yet you repeat yourself.

Gee, Mikey. You’d think a big man like you couldn’t get wussified by his family. Is someone abusing you at home? Is that why you take your anger out on women?

Yea, I have decided not to run as well so I understand his pain. I figure I had about as much chance of winning has he did so this was a big decision.

Dang. And I was anticipating how much fun we could have running the “Which Department will Stormy head up?” office pool.

His odds certainly are improving…

I suspect he has received his Bar Disciplinary complaint, a new referral from the bankruptcy court, and a possible notice of a criminal complaint.

He may be an actual warlock that #MeToo has been hunting.

Saying his name is probably the only truthful thing he’s ever said; why should anyone believe what he says now?

Maybe he can win this as a consolation prize. Enter to Win a Chance to Attend a Broadway Play with Hillary Clinton

Hillary Clinton is offering you a chance to sit down with her over a glass of wine followed by a Broadway play. All you have to do is donate to Onward Together and support a fairer, more equal America! Find out more in the video below, and click here to enter!

A nation already sorrowing for George H. W. Bush’s death is made even sadder.