“The outcome could have been different if law enforcement wasn’t restricted, prohibited, or had their hands tied because of political interference.” 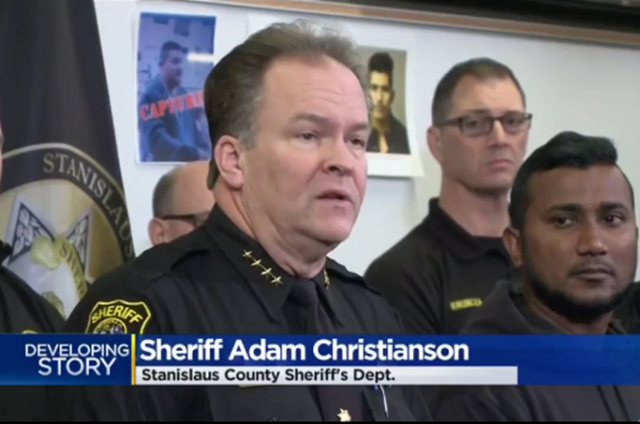 During 2018, Legal Insurrection covered California’s “Sanctuary State” rules and their impact on Golden State communities, as well as the revolt against these measures by cities and counties:

Legal Insurrection has been following the developments surrounding the manhunt and subsequent arrest of Gustavo Perez Arriaga, 32, who is the illegal immigrant they suspect murdered California cop Ronil Singh.

If he had been deported, the sheriff said, Cpl. Ronil Singh of the tiny Newman Police Department would still be alive.

“We can’t ignore the fact that this could have been preventable,” Stanislaus County Sheriff Adam Christianson told reporters, asking why the state was “providing sanctuary for criminals (and) gang members. It’s a conversation we need to have.”

…Perez Arriaga crossed the border in Arizona several years ago and had worked a variety of jobs as a laborer, including at several dairies. The 33-year-old Mexico native had gang affiliations and multiple Facebook pages with different names, Christianson said.

Christianson is angry that state officials cannot use ICE resources for law enforcement and public protection.

Christianson never said when Arriaga was arrested, but records show — and officials confirmed — that he was picked up for a DUI in Madera County on June 5, 2014 — years before the state’s sanctuary law prohibited local law enforcement from cooperating with federal immigration authorities.

…“We’re not here to enforce federal immigration law — that’s not our job,” Christianson said at the news conference. “But law enforcement should be able to turn people over to ICE who are gang members who victimize and exploit others.”

Many Americans share the sheriff’s thoughts about the “Sanctuary State” rules.

The blood of Kate Steinle, Mollie Tibbetts, and now Ronil Singh and others is on the hands of open border advocates and the sanctuary city loons who provide no sanctuary for the American citizen victims of these invading illegal alien criminals. https://t.co/NQn0l2bLN2

I wish there was a Federal Law that allowed the Attorney General to charge the Governor of California Jerry Brown, for his Sanctuary policies in the State, on the Death of PO .Someone should pay for the Death of the PO Ronil Singh. And I’m not talking about the Dirt Bag illegal

And, in great moments of political hubris, California State Senator Kevin de León, who introduced SB 54n (California’s “sanctuary state” law) that was signed by Gov. Jerry Brown in October 2017, sent Singh’s family some condolences. The social media message was not appreciated by many.

You should be ashamed. If our state communicated with ICE after BOTH of his illegal immigrant killer’s DUI convictions then Ronil Singh would be alive and his baby son would have a dad. Instead you advocate for abolishing ICE and endorse sanctuary state status in California. https://t.co/IdA8ih8Zzs

Meanwhile, 7 people have been arrested for being accomplices to Singh’s alleged killer.

Youngblood said that three additional people were also arrested in the South Valley for aiding and abetting Arriaga, according to KFSN.

Youngblood identified those suspects as Bernabe Madrigal Castaneda, 59, Erasmo Villegas, 36 and Maria Luisa Moreno, 57. He said the trio was inside the house where Arriaga was arrested.

We are likely to see even more #Resistance and more needless, illegal-immigrant-caused tragedies in 2019.

He’s right. I sense an action-packed SOTU in a few weeks.

God bless this man for speaking the truth.
Stand strong!

There needs to be a bounty on illegals, dead or alive.

How about we first just get the State to allow our laws to be enforced? Then we get rid of State laws that are designed to attract illegal aliens, such as the CA drivers’ license/voter registration, not to mention welfare for anchor baby families?

Get rid of the impediments to law enforcement, and the economic motivation for illegal border-crossing, and then see whether vigilantism is even needed.

Perhaps if we can get an amendment to the US Constitution in place that 3/4 of the states can voted to demote another state back to “territory” status? Inasmuch as California is returning to its “Wild West” roots, we are half-way there anyway.

Several years ago I half-jokingly began advocating ejecting CA from the union.

Now it is imperative.

I don’t think I would characterize it as any thing like the wild west, people had more freedom then. California is devolving into something like an East Germany with its one party rule.

California, the bellwether of our nation in so many ways. I can only hope that as they become Venezuela at our very doorstep, the object lesson will not be lost on the American public. Otherwise we will be like the South Africans who are doomed to emulate Zimbabwe, right next door to them.

Dear California, can we have an honest discussion about the Rule of Law? It’s one of those things that, if you lose it, you lose everything else. It all collapses. Then what? How do you help you fellow man then?

“Dear California, can we have an honest discussion about the Rule of Law?”

No, we cannot. There is no effective second party in California. There is nothing to keep their politicians honest, and they have been steadily “legalizing” election theft. They don’t even want illegal alien voters, so much as lists of names and addresses that can be used for vote “harvesting.”

I hope people reading this blog are thinking about running for office to do what our current crop of elected officials refuse to do: Defend Americans.

If you’re not thinking of running for office, put it on your to-do list. Also, consider running on another team’s ticket: be realistic about electoral math. So many don’t vote in primaries, you may have a better shot in the general if you’re of another party. People pay more attention to general elections, which granted isn’t saying much.

Can running be frightening? Yes. Everything in your closet – and some stupid things, like 2 scoops – will be brought up. But ask yourself: Is dignity so dear, and harmony so great, as to be purchased at the price of the descent of our American way of life?

If you refuse to run, write letters to the editor of your local paper and participate in telephone and in-person townhalls. Congressmen don’t really want to deal with you, but know at times they must. COMMUNICATE WITH THEM. THEY’RE MORE AVAILABLE THAN YOU REALIZE.

TRUMP SUFFERS DAILY FROM VICIOUS BASELESS ATTACKS; THE LEAST WE CAN DO, THE LEAST WE ARE OBLIGATED TO DO, IS PARTICIPATE AND PRESSURE OUR CONGRESSMEN.

And for those that do not know, in 2006, Geo. Bush asked congress to pass AMNESTY. Constituents MELTED their phone lines. INSTEAD, we got the “Secure Fence Act” of 2006. Granted, they didn’t build it, but they didn’t grant amnesty either.

The PHONE IS YOUR FRIEND.

Information on running for Candidates for federal office:

The government officials who are responsible for the sanctuary strategy are accomplices, are they not? Arrest them.

More than arrests of politicians will occur when these criminal migrate elsewhere and commit violent crimes.

Wait until this crosses state lines into neighboring states.