They have not released a name. 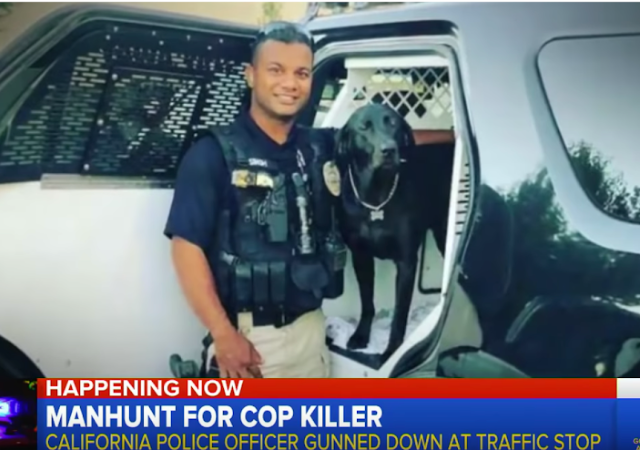 The illegal immigrant fugitive wanted in the murder of a California police officer is in custody Friday after being on the run for more than two days, Fox News confirms.

Authorities have revealed the man who allegedly killed California cop Ronil Singh is in America illegally.

Cpl. Robert Singh stopped a man for a DUI investigation, but the suspect began a gunfight with Singh. Singh “reported ‘shots fired’ over his radio a few minutes later.” Backup rushed him to the hospital where he later died of his wounds.

The Stanislaus County Sheriff’s Department has not confirmed the alleged murderer’s name and age. They do have the “truck believed to have been driven by the suspect.”

The unidentified man alleged to be behind the slaying of Newman police Cpl. Ronil Singh, 33, “is considered armed and dangerous,” Stanislaus County Sheriff Adam Christianson said during a news conference on Thursday afternoon, vowing that the manhunt would “relentlessly continue.”

“This suspect … is in our country illegally. He doesn’t belong here. He is a criminal. We will find him, we will arrest him, we will bring him to justice,” Christianson said.

Singh was shot and killed during a traffic stop just before 1 a.m. Wednesday in Newman, about 100 miles southeast of San Francisco, according to police.

The following pictures of the suspect including a name & birth date have been circulating on social media. We can confirm these are pictures of the man who murdered Corporal Ronil Singh. We CANNOT, however, confirm that the correct name or birth date is being put out. pic.twitter.com/cSCvE1DhEF

One of the pictures shows a tattoo “$ur3no$,” which has led some to believe he has connections to the street gang Sureños:

“Sureños are a group of Mexican-American street gangs with origins in southern California (south of Bakersfield),” reads a profile on the group in a police gang recognition guide. “The gang has allegiance to the [California] prison gang, Mexican Mafia, aka “La Eme”.

Ten alleged members of the Sureños gang were charged in April for their suspected roles in seven murders in the Bay Area dating back to 2006, the Los Angeles Times reported.

The gang has also caused recent trouble along the U.S.-Mexico border. Immigration officials arrested one member outside of Tucson, Arizona in July on human smuggling charges after five illegal immigrants were found inside his truck. Months earlier, another member – who had been previously deported from the U.S. – was taken into custody along with two other illegal immigrants in southern Arizona, the Border Patrol said.

According to Beto O’Rourke – the comfort and safety of immigrants should be our highest concern.

“Illegal immigrant” is an oxymoron. “Illegal alien” is the correct term.

At this point, the term should be “murderous illegal alien”. If he did indeed commit this felony, he may spend 10-to-20 years in this country as a ‘guest’ at the Graybar Hotel but he will never gain citizenship!

unless the party of illegals AKA donkeys yake over –
then all is forgiven, just ask ‘the wise Latina’

Will Jerry Brown pardon this killer so he cannot be deported? Save him from the clutches of ICE?

Moonbeam might pardon him for the murder – it seems he’ll do almost anything now – but he does not have the power to pardon the illegal entry into the country.

Of course, Moonbeam could arrange for him to be transported to ‘Frisco and released in that sesspool … uhm, I meant “Sanctuary City, of course. ICE would be hard pressed to find him there.

Wait a minute. How did the illegal alien get a gun? Calipornia has ALL the “common sense gun laws” there are. Maybe they need more?

The picture of Officer Singh with his wife and baby, taken only hours before he was killed by that piece of trash, moved me to tears. (It was on another site.)

Whoo hoo! Caught the bastard. May he rot in hell.

This will disappear pretty quickly…mostly with thanks to the Democrat media (I repeat myself!).

And his “spark of divinity” (right Nancy?)

Let’s hope this vermin is terminated, with extreme prejudice.

If someone had to be killed by an illegal, it’s a shame it wasn’t Pelosi, Moonbeam, Newsom or someone close to them.

Can Schumer be charged with felony murder for his complicity in demanding illegals a porous border?

I’m surprised the man survived the arrest. Then again, we must consider the possibility this is *not* the correct suspect, since the California police have proven to be somewhat less able to track down murder suspects as opposed to their laser-like focus on any crime that can result in a check being written to the state, or loose piles of cash forfeited to the state.

Twenty years of trials and appeals, followed by 40 years on death row.

To georgfelis: showcme one state where this is NOT true.

One more of Nancy Pelosi’s cohort of “God’s children” doing a good deed.

I’d like to hear opinions on whether a federal civil rights lawsuit could be filed by Officer Singh’s family against any jurisdiction that released this illegal back into the community after his previous arrests rather than calling ICE. Use California’s own verbiage from California Government Code 19572: (b) Incompetency (c) Inefficiency (d) Inexcusable neglect of duty (n) Improper political activity (s) Refusal to take and subscribe any oath or affirmation that is required by law in connection with the employment (t) Other failure of good behavior either during or outside of duty hours, which is of such a nature that it causes discredit to the appointing authority or the person’s employment. Every time they release a criminal illegal alien they violate their own statutes. If the releasing authorities and agencies are sued, along with each individual participating in the releases, I have a feeling they will begin complying with federal requests for detainers.

No, it could not.