I don’t see how Snipes gets her job back. But hey, it’s Florida. And there’s no telling what Florida Man will do. 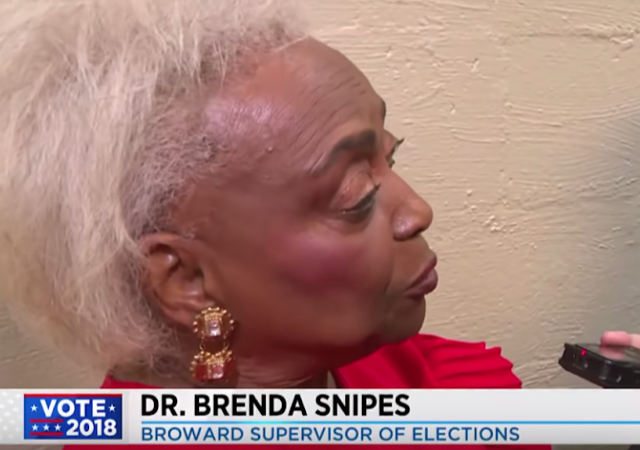 You remember Brenda Snipes, the Broward County Elections Supervisor who provided plenty of drama in the Florida Governor and Senate races.

She came under such withering criticism that soon after the recount was done she submitted her resignation effective January 4, 2019, and seemed destined to ride off into the Florida sunset with her $130,000 annual pension.

But Governor and Senator-Elect Rick Scott was not satisfied. He suspended her from office on November 30, 2018. The next day, Snipes purported to rescind her resignation, and claim her job back.

On December 18, 2018, Snipes filed an Emergency Complaint in federal court in the Northern District of Florida seeking emergency reinstatement. The Court is treating the filing as a motion for a preliminary injunction, and has set a quick briefing schedule, as reflected in the docket entries below. The hearing will be on January 9, 2018.

The judge assigned to the case, Chief Judge Mark Walker, is no stranger to the ballot issues that plagued the recent election. As the Tampa Bay Times reported in mid-November, Walker was at the center of the legal fight:

Federal Judge Mark Walker — perhaps best known for thwarting Gov. Rick Scott’s agenda against the restoration of felons’ voting rights — is suddenly the most powerful person in Florida and will soon decide whether to suspend the deadlines for completing recounts of millions of ballots in three major state races.

Walker, nominated by former President Barack Obama in 2012, has been assigned federal lawsuits filed this week in Tallahassee that aim to extend fast-approaching deadlines until all 67 Florida counties complete their machine and manual recounts.

A couple of other suits assigned to Walker seek to allow the tabulation of certain mail-in ballots with mismatching voter signatures and other absentees that were not counted because they arrived late at elections offices statewide. And another suit seeks to remove Scott as a member of the state board that ultimately certifies the results of the general election.

On Wednesday morning, in a conference call with lawyers involved in one case, Walker made a Star Trek analogy while saying he had to resolve seven-election related lawsuits in a matter of days. “I feel a little like Captain Kirk in the episode where the Tribbles started multiplying,” Walker said.

Walker ruled in favor of Democrats’ demand to allow voters to cure ballot signature mismatches, and was upheld on appeal:

The 11th Circuit Court of Appeals upheld an order by U.S. Chief Judge Mark Walker to allow Florida voters a chance to “cure” their ballots that were rejected because the signatures didn’t match what supervisors of elections had on file.

“I think we can take it from here there will be a cure process,” said Marc Elias, the lead attorney for U.S. Sen. Bill Nelson in the myriad recount cases working their way through state and federal courtrooms. “This should give pause to Republicans who want to gum things up. The 11th Circuit sided with disenfranchised voters.”

Lawyers for Gov. Rick Scott, who watched his lead over Nelson erode from almost 60,000 votes to a little more than 12,000 votes, called the lawsuit frivolous and Walker’s rationale for his decision “meritless.”

Walker issued a preliminary injunction this morning in Nelson’s lawsuit over ballots thrown out because of mismatched signatures — declaring a state law unconstitutional and ordering the state to give voters until 5 p.m. Saturday to cure the problem.

“The precise issue in this case is whether Florida’s law that allows county election officials to reject vote-by-mail and provisional ballots for mismatched signatures — with no standards, an illusory process to cure, and no process to challenge the rejection — passes constitutional muster,” Walker said. “The answer is simple. It does not.”

In a 2-1 ruling, the appellate court denied the request from Secretary of State Ken Detzner and the National Republican Senatorial Committee to stay Walker’s order issued earlier today. The terse three-page ruling said, “Appellant has not made the requisite showing.”

Walker, however, ruled against Democrats, who wanted to extend the recount deadline:

Democrats suffered two major defeats on Thursday as a judge refused to extend vote-counting deadlines in the U.S. Senate race that’s headed for a hand recount and rejected their request to obtain names of every voter whose mail ballot had a signature mismatch.

In unusually strong language, U.S. District Judge Mark Walker in Tallahassee rejected a request by Sen. Bill Nelson’s campaign to give counties more time to complete machine recounts that were due at 3 p.m. Thursday.

“There is a complete dearth of evidence before this court concerning the status, progress or expected completion of the ordered recounts in Palm Beach County,” Walker wrote.

Earlier on Thursday, Walker took several groups to task, including the Florida Legislature and the Palm Beach County supervisor of elections, Susan Bucher, for issues that the judge said led to delayed counts.

“We have been the laughing stock of the world, election after election, and we chose not to fix this,” Walker said.

Walker also ruled against Democrats on their attempt to extend the mail-in ballot deadline:

A federal judge is rejecting a lawsuit that challenged Florida’s vote-by-mail deadlines.

A veterans voting rights group and Democrats challenged the Florida law that said ballots mailed inside the United States could not be counted unless they were received by 7 p.m. Election Day. The groups said that was unconstitutional because overseas voters can have their ballots counted as long as they are postmarked by Election Day and are received within 10 days after the election.

U.S. District Judge Mark Walker, however, ruled late Friday that these rules were in place for more than a decade and to change them now would “undermine the electoral process.”

Walker also said the state had a right to create some sort of deadline and called the restriction “reasonable.”

So Walker has ruled for Democrats and against Democrats on issues related to the problems in Broward and Palm Beach Counties. Which means there’s no predicting how Snipes will do with this Judge.

To me, the issue is that Snipes resigned. At best, perhaps she’d be due some compensation between the date she was removed by Scott and her original resignation effective date of January 4, 2019. I don’t see how she gets her job back.

But hey, it’s Florida. And there’s no telling what Florida Man will do.

Maybe Dr Snipes is going use that old, “Yeah, I suck at my job but give it back to me anyway” defense…???

She’s probably irreplaceable. Her level of job performance isn’t something one can find just anywhere.

This action was filed in the wrong venue. This is a state matter and Snipes should have filled for easement in a state court. Both the Governor and the Supervisor of Elections are state Constitutional officers and the governor does have the power to suspend a constitutional officer for cause, under state law. The Federal government has no jurisdiction in this matter, until such time as the state denies here due process. As little as 20 years ago, a federal judge would have referred the plaintiff to state court.

that would be true, *IF* we lived in a nation of laws, but we don’t anymore…

so “venue” “schmenu”: they shopped for a judge to give them the result they want.

Exactly my point. But, people have to demand that legal standards, such as venue, are honored. Otherwise, all that is left is rule by force of arms.

This is a state matter, not a federal one, at this point.

Her case is that the Florida law under which she was fired violates the 14th amendment, so federal court is the proper venue.

This was a spurious argument in order to file the case in the federal courts.

Nothing has happened to Snipes which has not happened to many other officials in the State of Florida and none of those have been determined to be a violation due process. Normally, a suspended official would appeal the suspension to the state Senate. If they uphold the suspension, then the official would file suit in state court. Then Florida State judicial system would make a decision as to whether the suspension was legal and constitutional.

The problem which Snipes faces is that she has not availed herself of all of the procedural remedies available within the state government. There is no suit currently on file with the state courts. Until she attempts to avail herself of all the state remedies, then she can not claim a due process violation under the 14th Amendment. So, thee US District Court is the wrong venue. We’ll see if the judge agrees.

The reason none of those were ever determined to be 14th amendment violations is that nobody ever tried such a ridiculous claim before. The problem with her suit is not the process, it’s the foundation.

If you accept her premise that elected officials have a property claim on their office, then it’s reasonable to argue that they can’t be removed from office without due process, and any law or state constitutional provision allowing such removal is unconstitutional. But that premise is just too ridiculous for words.