“You go to Port St. Lucie, Orlando…man them crackers ain’t gonna let us do that s**t dawg.” 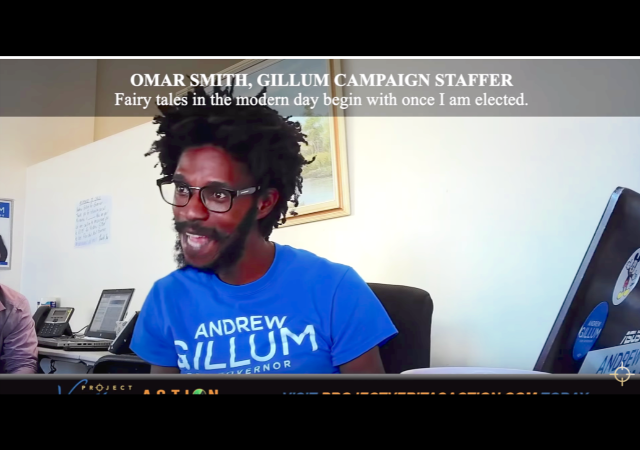 The undercover journalist asked Omar Smith, who claimed he went to college with Gillum, about receiving funding for all the programs Gillum has promised to implement:

Smith explains that most of Gillum’s campaign promises could never be implemented, and that the Gillum campaign knows this:

Smith stressed Florida needs to change the racial makeup in the legislature in order for Gillum to do everything he wants to do, which led to his racial tirade against white people.

Smith called Florida “a f***ed up ass state” and a “cracker state.” He continued:

Get it? Ask anybody outside of here. You go to Port St. Lucie, Orlando…man them crackers ain’t gonna let us do that s**t dawg. Boy, you crazy? I lived in Tallahassee for 10 years, I’ve seen it. I went to a black college. Even my father wife, she like oh them crackers gonna take over FAMU (Florida A&M University). N***a’s ain’t ever gonna be s**t, they can’t get it right. I hear that s**t so much, I’m like y’all mother f***ers crazy. Really?

So to change all this, Smith said, “You have to appeal to white guilt.”

The journalist asked if it has to be done by force. Smith responded that “we’re voting for him hoping that once he make it, somebody else will pick up the fight to make sure that the proper, the proper legislators get in office when we vote again in August, to execute the agenda of the Governor.”

Another staffer said, “Progressive is like the Tea Party of the Democrats.” Smith then interrupted, “It’s the far right. Medicare for all, borderline Socialism.”

The journalist thought this meant the Blue Wave the Democrats keep talking about, but Smith said that is the Progressive agenda and they “are the crazy crazy crazy Democrats.”

Then Smith admitted that “Gillum is a Progressive” and “part of the crazy crazy crazies.”

Field organizer Christian Rodriguez told the journalist that while Gillum is a full blown progressive, he cannot portray himself as that because the campaign needs “the people who are independent votes, we need moderates, we need everyone.”

Smith went further: “… We don’t, do we have to let [the voters] know what the agenda is ahead of time? We can’t… We cannot… You alienate everybody. Then you get painted like, oh, Gillum is being painted, no. You are a socialist, you are way out of left field…”

Cliff Eserman of the Broward County Democratic Party said that Gillum had to show his far left side in order to win the primary, but it’s normal that in the general election, “he’s going back to left of center.”

Eserman also informed the journalist that while Gillum “does believe in Medicare for all,” that issue “is a federal issue.”

HOLENESS: “There ought to be at least a three-day waiting period for everybody and a full background check for everybody… And we need to- And these automatic guns with sixteen rounds a minute, they ought to not be on the streets either, so that’s his plan.”

Adrian Young, who works for the Florida Democratic Party also elaborates on Gillum’s gun control views in the report:

YOUNG: “… I do think he’s not saying specifically like I’m going to ban bump stocks or I’m against ATs, only because he’s running a race right now. I do think he would support anybody doing that stuff, Bill Nelson… But I don’t think he can say it just [be]cause he’s trying to get the moderates and the gun-toting people in North Florida…”

And that is what kind of truth comes out when there is rea “Cracker” Jack reporting instead of the MSM.

That kid and his cohorts are doing stellar work!

Both GA and FL are tempting fate beyond measure should their voters place either one of the Obama acolytes into positions of power. The really scary part of this is that these races are close! Yikes!

The left’s 60+ year takeover of public education is bearing fruit when we witness who has come into power (Pelosi, Obama, leftists generally), and when an Abrams or a Gillum could be governors in the South.

While entertaining, this is hardly news. Gillum ran as a full blown socialist in the primaries. He won that because he had virtually all of the black vote and much of the liberal white vote. And, this video is not going to cause him to lose that, unfortunately.

If you speak to people in the blue counties of Florida, most people who acknowledge that they are going to vote for him seem to have no idea what his positions are, on the issues. They are intent on voting for him based almost entirely upon his skin color. The reason why the Florida governor’s race is so tight, in the polls, is because Florida is almost evenly divided between liberals and conservatives. And, liberals are steeped in identity politics and “racial guilt”.

“…this video is not going to cause him to lose that, unfortunately.”

I think that is understood. This video is about getting out the vote on the conservative side by making sure people understand what the alternative to staying-home and not voting is.

…at least Omar is. Hilarious or sad clone of what every POC is portrayed to be.

It’s easy to see Gillum getting %95 + of the Black vote, since all they care about is that he’s black.

But, it’s hard to imagine many other Floridians voting for someone like Gillum.

You have to understand the current demographics in Florida. At the moment, you have several heavily populated counties which are solidly liberal. Their population is steeped in Northeastern liberal doctrine, including identity politics and Progressive ideas. Most of the conservative residents have moved out of these areas to more conservative climes, within the state. And, these liberal, urban/suburban counties make up ~1/2 of the total population of the state [21 million total and almost 9 million people live in Miami-Dade, Broward, Palm Beach, Hillsborough and Orange counties and all are very heavily liberal]. So, Florida is essentially two states, ideology wise, both being relatively equal.

Project Veritas – Show me the raw footage. Show me the context. Otherwise, I don’t give a damn. The guy has been caught misrepresenting too many times.

On this one, you can add all the comments you want. I won’t be reading them. He is a damn liar. Period.

“The guy has been caught misrepresenting too many times.”

Please link to a few examples.

He can’t. Project veritas always posts the full video as well as the highlights reel at the same time. Everyone ignores the full video with it’s long spans of nothing happening (like the real life situations being recorded) and then accuse them of ‘selective editing’. All editing is selective. Do you really need two minutes of the guy preparing his cup of coffee to judge his words?

See, despite what your mommy promised, you don’t matter.

You don’t really want to see the raw footage, you just thought demanding to see it would show them up. What you seem not to know is that unlike any other source ever, Veritas always does post the raw footage. And it always backs up the edited version.

So, as per Trayvon’s girlfriend, Florida is brimming with white ass-crackers, presumably old geezers wintering from NYC.

Somebody alert the SPLC about this hateful homophobe.

We have nothing but her word to say she really was his girlfriend.

Look at the videos and images for this guys rallies and it’s hard to see just who exactly is going to vote for him??

Off they ain’t gonna turn out for Obama or Bernie then it’s hard seeing them turning out on Tuesday for this clown.

“Smith called Florida “a f***ed up ass state” and a “cracker state.” He continued:…

So to change all this, Smith said, “You have to appeal to white guilt.”

Wow. America’s finest right there. I blame gub’mint school. It’s also why I don’t care about accusations of racism. Fen’s Law: The Left doesn’t truly believe the things they lecture about to the rest of us.

It is still so strange to me that white people are “smeared” with the term “cracker.” I know it’s supposed to be as insulting as the “N-word,” but . . . really? “Cracker”?

It’s so ’60’s hippie, Black Empowerment, hate America that I suppose it should be insulting, but . . . really?? “Cracker”?

I know it’s not the point of the post, but every time I see that, I just think of the time warp these poor sods are stuck in and how out-of-touch they are with anything post-peak-SDS/Black Panther domestic terrorism.

Being called a “racist” during the early Obama years (before the race card expired) was far more hurtful and insulting than “cracker,” which just makes me giggle.

According to the left’s rules, the insult is in the ears of the beholder. And what the speaker was THINKING when they say it.

So we’ll just go with their comments that cracker is racist.

okey dokey. I think being called “white” is more insulting that that or even racist. I’m not white. If I’m white then please take me to a hospital cause I’ve bled out!

Did Veritas do Stacey Abrams yet? I hope they have one ready.

This woman is dangerous and needs to be stopped but I don’t think right now the GOP in GA can do it.

It appears that smugly and snidely insulting and denigrating the very voters that one is attempting to win over — behind closed doors — is now a prerequisite trait for Dumb-o-crat candidates running for national office.

Don’t make me go all Saltine on your a$$!