“We promised to change the status quo, and we intend to deliver on that promise.” 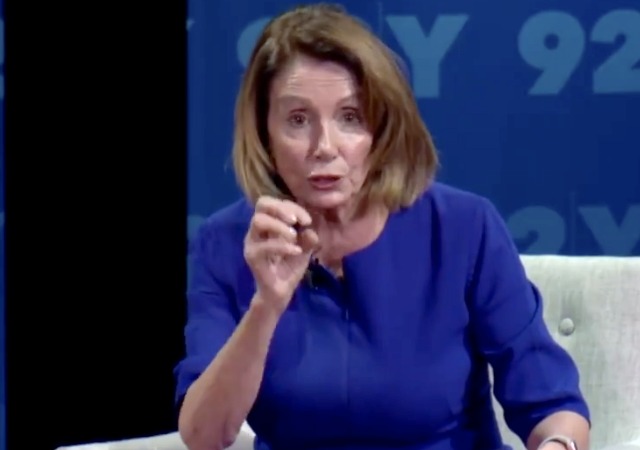 The Democrats released a letter today, launched by Rep. Katheleen Rice (D-NY), promising to oppose Pelosi’s appointment since they promised to “change the status quo” upon their arrival in DC.

NEW: 16 House Democrats sign letter thanking Rep. Pelosi for her years of service and leadership, but urge “that the time has come for new leadership in our Caucus.” pic.twitter.com/TfyJJkqbyB

The Democrats lost Rep. Marcia Fudge (D-OH) even though she originally signed it and thought about running against Pelosi. The two ladies had a meeting last Friday, but neither one told anyone details about it.

Fudge will make her decision after Thanksgiving.

Will this hurt Pelosi? From The Hill:

It’s unclear if the anti-Pelosi lawmakers have the numbers to topple the longtime Democratic leader. Democrats picked up at least 37 seats in the midterms, but four races have yet to be called, so it remains to be seen how high the number will rise.

If Democrats win all of the outstanding contests, Pelosi could lose 18 votes within her party and still clinch the gavel (assuming all Republicans oppose her). If Democrats lose all of those uncalled races, she could afford to lose 14.

The Washington Post reported that Rep. Diana DeGette will not try to unseat Rep. James Clyburn (D-SC) to become the #3 Democrat in the House after it upset those who admire him:

“Since my announcement, I have been heartened by the backing I have received across the caucus,” DeGette said in a statement. “Over the last few days, however, many of my supporters have expressed concern about pressure they are receiving to return the three senior leaders to their posts without opposition.”

DeGette, who has long served as chief deputy whip, launched her campaign after the Nov. 6 election by touting her experience in rounding up support for difficult pieces of legislation — implicitly making the case that Clyburn, 78, was not up to or interested in the task.

But the challenge upset backers of Clyburn, a former Congressional Black Caucus chairman and a revered figure among the caucus’s roughly 50 African Americans — who bristled at the notion that the caucus’s top tier could be all-white.

“Out of the three of the leadership positions, he is the only one with announced opposition,” Rep. Cedric L. Richmond, the current Congressional Black Caucus chair, said last week. “I just think it is offensive and insulting.”

They’re full of shit. This is just more BS from them.

No Democrat is actually a candidate against Pelosi for Speaker.

This is Failure Theatre – well gosh gee whiz guys, we didn’t WANT to vote for her but nobody else ran!

The Young Socialists or the Democrat Party are doomed to failure. The Speakership in the bag for her Imperial Highness: Queen Nancy. The Republicans have vowed to make up the difference. The pro-formal of all House Members may become a real vote.

She will make a great foil for the Republicans and President Trump in the next two year.s

If she’s re-elected Speaker with the help of Republican votes, it’ll be hilarious when Trump starts calling in favors from her.

I want them to pick the most left wing democrat in Congress, with the most outrageous agenda and make him or her speaker. I figure after 2 years of that, democrats are going to have a difficult time getting anyone to take them seriously in 2020.

That would make 2020 a dead nuts lock for Republicans.

DEFINITELY NOT A LOCK.

Having just elected Never Trumper and John Boehner 3.0 (i.e., Lyin Ryan was Boehner 2.0), Kevin McCarthy as Minority Leader, it seems that the Establishment Republicrats learned nothing about why they lost control of the House.

McCarthy who is about as conservative as Barack Obola and Lyin Paul Ryan, is out advertising himself to be a conservative and beating the airwaves for donations tied to a promise to Build the Wall.

Sorry Kevin: “Been there done That” while watching you, Ryan, Scalise, and the Establishment Republicrats sit on your fannies to waste two years of a golden opportunity.

NOT ONE SINGLE THIN DIME, EXCEPT FOR THE PRESIDENT WHO HAS AND IS DOING THE JOB !!!

Given the election thefts by Demtards in Orange County-CA, Arizona, and FL and the likely stonewlling by Establishment Republicrats made prominent now that San Fran Nan has retaken the House, DEFINITELY NOT A LOCK.

I can see it now. A Representative rises to voice an opinion. Ocasio-Cortez chimes in, “Hey, who said you could say anything! I’m the Speaker.”

I don’t think these folks are familiar with the advice about making sure you succeed if you are going to attempt to kill the King.

Pelosi was an effective (translation: disastrous) Speaker during the days when Harry Reid was basically running both Chambers. But without a criminal mastermind like Reid dictating the D’rat strategy and calling all the major Legislative shots, another Speaker Pelosi will be just a silly and increasingly feeble old bat. (Though still disastrous.)

“Feeble Old Bat” That really got me laughing!

I can actually see Republicans voting for her just to spite the National Socialist Party. Trump would welcome the senile lady as an opponent. She helps mobilize the Republican voters, she is a vile and hate filled woman who is losing it mentally. She does keep an iron fist on the throats of her fellow Democrats, but I wonder if the new further left members will rebel more against her.

I see nothing but gridlock coming up, which is an effective tool for Trump. Expect Schumer and Pelosi to build the levels of hate to a point where no one can stand them other than the base, and even some of them will balk at them.

Irrelevant. I hereby declare myself Imperious Director of the 3rd Chamber of Congress!

Hyphenated-Cortez: “Fen, you jackass. I missed that day of poli sci because Dr Mungus had me perform an oral exam for statistics. ”

Uh-huh. That seems to be a recurring theme with you. But.. you know that Mungus is not a real name you know

Cortez: “No matter. He only taught for that one day. Weird…”

Hey! Want to go mix things together in the Chemistry Lab?

Miss Lube Rack 1955 will not go quietly and besides she is the greatest selling feature for the opposition.

And if she does prevail, woe betide the 16 that signed.