Obama Now Wants Credit for Boom in U.S. Oil Production: “That was me, people”

Obama Now Wants Credit for Boom in U.S. Oil Production: “That was me, people”

“You wouldn’t always know it but it went up every year I was president.” 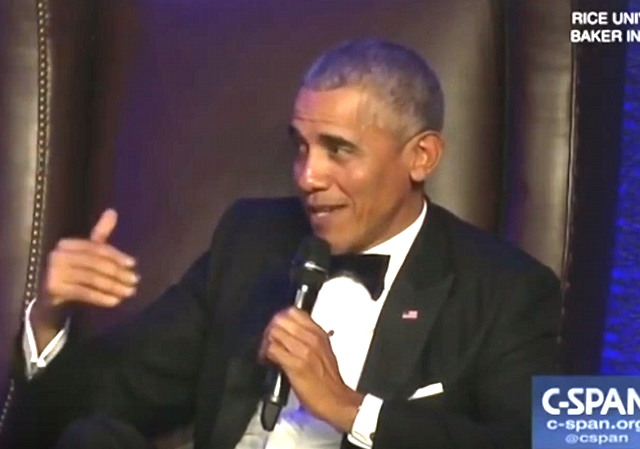 Former President Obama has developed a habit of running after President Trump and trying to take credit for positive developments happening on the current president’s watch. The latest example came Tuesday when Obama declared that he is responsible for increased oil production in the United States.

“I was extraordinarily proud of the Paris accords because — you know, I know we’re in oil country and we need American energy, and by the way, American energy production,” Obama told the audience gathered at Rice University’s Baker Institute on Tuesday night. “You wouldn’t always know it but it went up every year I was president. That whole, suddenly America’s like the biggest oil producer and the biggest gas — that was me, people.”

While U.S. oil production surged by nearly 100 percent over the course of Obama’s two-term presidency, the vast majority of that oil was extracted from state and private lands as the Obama administration took steps to curtail oil production on federal lands. Obama did, however, lift a longstanding ban on crude-oil exports in 2015, bolstering what was then an already-booming industry.

It’s important to note that Obama says this just a few months after the start of a war in the Democratic National Committee over the acceptance of donations from big oil.

Just this week, students at Brown University stormed into a meeting to demand that Democrats stop taking cash derived from fossil fuels.

Also consider that climate change is still one of the favorite issues of Democrats. They talk about the dangers of it constantly, yet here is Obama demanding a thank you for an increase in oil production.

Messiah for the Democrat party: I was awesome for fossil fuel oil production and Wall St. banks.

Democrats: We need to abolish fossil fuels because we only have 10-12 years before everybody is dead.

Obama: I drink your milkshake!

This is also a great take:

This is like a defender taking credit for the opposing team’s touchdown because he failed to stop it. https://t.co/DuibuUSk2J

While covering this story, Twitchy dug up this 2013 gem from Obama’s Twitter feed:

“We can’t just drill our way out of the energy and climate challenge that we face. That’s not possible.” —President Obama #ActOnClimate

Here are a few more reactions to the video on Twitter:

This man is stunningly deluded

The only thing I’ll thank him for is leaving the White House w/o having to be dragged out https://t.co/uriAtTdu7c

I think the men and women who work 12+ hour backbreaking shifts on an oil rig weeks at a time, missing holidays, birthdays, first steps, etc. would beg to differ. https://t.co/Pc5xCXFbn4

Dems: We were great for fossil fuel production! https://t.co/wXAvyEZR0d

This is just another classic from the man who once said: “You didn’t build that.”

(That being the oil industry in the U.S.)

Wait until praise of return of coal production….

Back in the fifties, this would have landed him in an asylum for a long stay. Now his worshipers actually believe this crap.

notamemberofanyorganizedpolicital in reply to inspectorudy. | November 29, 2018 at 5:01 pm

The nutty inmates have been running that place.

We’ve known that for years now.

He did everything he could to stop pipelines, fracking and minimize domestic oil production.
Wasted billions on all sorts of electric crap, windmills, solar. Even nuclear energy was promoted over oil or gas anything.

“You wouldn’t always know it but it went up every year I was president. That whole, suddenly America’s like the biggest oil producer and the biggest gas — that was me, people.”

If there was a chart for lack of humility, his would be so far off of the chart you’d need a map to find it.

This guy’s narcissism knows no bounds.

As they might say in the patch, this guy has really twisted off.

Oh, Please! The only thing that has stopped more drilling than Obumbles is crappy dental insurance.

And you thought Al Gore inventing the internet was dumb…

You didn’t build that.

I guess since he failed to make the oceans recede, he figured what the heck, may as well make the oil industry boom.

How did this clown get elected twice?

His elections, especially the second one, speak volumes about our once-great nation. I do not see how we will get beyond the rampant racism he inspired.

The worm could not have done it without the help of the GOPe, namely two jerkoffs: Romney and McCain.

The oil industry in the USA would have gotten to this point a lot quicker if it had been allowed to frack on federal land or obtain exploration leases on Federal land. All of this frackin’ was done on private land over Obozo’s and the enviroweenies objection.

To say “that was me folks” would embarass anyone in Obama’s position who had self awareness. But then he doesn’t.

Barack Obama is a petulant little twat. He did nothing but whine and blame things on Bush during his eight years, and now he wants to run around and claim credit for anything positive happening under Trump. Seriously dude, just shut the fuck up.

Trump, by undoing what Obama did, has humiliated Obama and his legacy and Barry is desperately trying to save face

He has about the same chance as mooooochelle does in being elegant.

You mean took the humiliation away from the great United States and put it back were it belonged: on Obama?

He didn’t do squat for production. He and his little bureaucratic minions attempted everything they reasonably could to curtail exploration. And can you imagine the outcome if his plans for passing ‘cap and trade’ had materialized?

Advances in drilling technology allowed the oil and gas industry to send a big “EFF YOU” to him and his efforts to hamstring them in the hopes of elevating producers of alternative sources of energy (that to this day can’t sustain themselves financially).

I don’t understand why Obama’s lips don’t spontaneously burst into flames when he spews some of these whoppers.

A stroll on water is coming soon

True – somewhere in a toilet.

Almost everything he did was negative for the oil industry, but you guys are forgetting his brilliance when he joined forces with Hillary as Secretary of State.

When they teamed up to overthrow the government in Libya in March of 2011 – with zero plan whatsoever to rebuild the country or ensure peace afterwards – they really spiked the price of oil. It reached $128/barrel in April 2011 and stayed over $100 for the next three years.

The fact that markets for slaves have resumed in Libya is just a further tribute to the foreign policy acumen of Barack & Hillary.

If anyone does want to give any credit to Obama for helping out the oil industry, please point out that invading an OPEC member was the only thing he did to help.

And the increase in the number of cores per microprocessor CPU? #thatwasme,people.

Obama’s pettiness, malignant narcissism, vanity and glaring insecurities are on full display in this episode.

There is no doubt that he is a believer in his own messianic myth.

What a pathetic worm.

A jackass of hillary clintonian proportions.

And finally, a legend – in his own mind.

He didn’t drill that.

He didn’t drill anything. He was a taker.

In spite of his policies that cost me greatly in mandatory mortgage insurance, I bought my first home in 2013. Thanks Obama!

When does he take credit for the huge spike in gun sales?

Obama reminds me of some poor quality managers at a big company. One time they decided that everyone in the company had to have the same kind of computers, because their IT people weren’t capable of dealing with different ones. This was at the time when MACs were running rings around PCs, but were far more expensive.

One of the operating divisions, the most profitable one, said something like “out of our cold, dead hands.” The company backed down for them, but issued a requirement that put a limit on the cost of computers.

So, engineers and chemists at the Research Division bought cheap MACs and the parts to upgrade them. They did their own upgrades, and even set up small independent networks (when this was very complicated). One of them said to me “It’s hard to keep smart people from doing their work.”

The oil companies have a long history of outsmarting the rule makers in our government. They understand rules, they understand economics, and they are highly motivated to make money. If the government makes a rule, they will comply, work around it, or invent around it. That’s what the oil companies did during the Obama years. Obama did his damnedest to strangle the industry, and he did have an effect, just not as bad as he’d hoped.

In the private sector, Obama wouldn’t get past the mail room.

Not true. He’d be appointed the Chief Diversity Officer at a big company. Unfortunately, many of our private sector companies are just as PC as the public sector.

Precisely why this dolt went into government.

Notice how all of the prominent Dumb-o-crats have scant to zero records of substantive private sector accomplishment.

Not true. He’d be appointed the Chief Diversity Officer at a big company. Unfortunately, many of our private sector companies are just as PC as the public sector.

“biggest gas — that was me, people.”
Hard to argue with that.

Clearly, a legend in his own mind. Large problem: million of people believe him and would vote him in again.

This is weirder than it looks.

Obama did his best to knock the US “down a few pegs” with his program of surrender abroad and, at home, harassment and oppression of political opponents, perversion of the mechanisms of federal government, and general boosterism of racist resentment and hatred. Destruction of America’s energy economy was part of his program. He thought this was a good thing, and I’m sure he was terribly pleased with himself when he regarded what he thought he’d accomplished. Fortunately for us all he wasn’t very good at it, and much of the damage was rapidly reversible, after our good luck in getting an energetic and pro-American President as his successor.

But why is Obama reversing his tune now? In Obama’s conceptual universe, an America self-sufficient in energy should be bad, and not some “accomplishment” he would ever dream of taking credit for.

I really miss those “it’s all about me” years of Obama. Not.