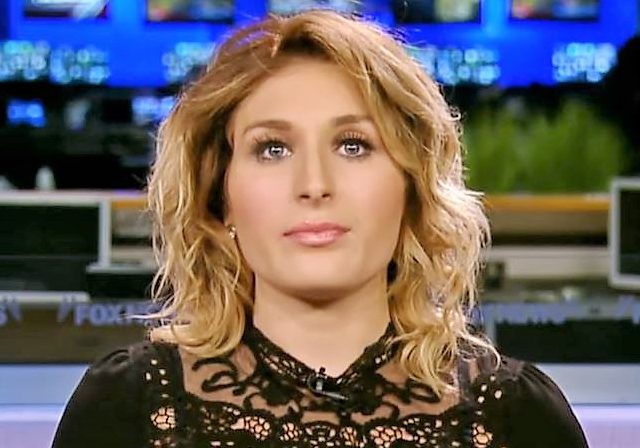 Alex Jones, who is no conservative but is put in the “far right” box by the media, has been deplatformed from numerous social media services, in a charge led by CNN.

If you thought it would stop at Alex Jones, you haven’t been paying attention, as I wrote in The Big Tech censorship storm has landed:

The targeted takedown of Jones was strategic.

Few people want to defend the substance of his content. So CNN gets to wrap itself in self-righteousness, even though it was an act by CNN of political activism.

And yes, these are private companies who can do what the government cannot. We understand that. But they have taken on a role approaching public utilities, without whom we can’t communicate politically.

This is something we’ve covered a lot in the past year, how an oligopoly of left-leaning high tech firms control virtually all of our social media interactions….

The social justice warriors have moved from shouting down speakers on campus to pressuring high tech companies to expand the definition of “hate speech” and “community standards” to the point that anything right of center is at risk….

These social justice censors start with neo-Nazis, then define everyone who opposes them as the equivalent of neo-Nazis. So they move on to Alex Jones, then the NRA, and won’t stop until mainstream conservatives are banned….

This battle is not about Alex Jones. Anyone who thinks it is, hasn’t been paying attention.

Laura Loomer just got the Twitter boot because of a tweet calling out Minnesota Congresswoman-elect Ilhan Omar.

Her most famous encounter was disrupting a Shakespeare on the Park production depicting the killing of Trump: 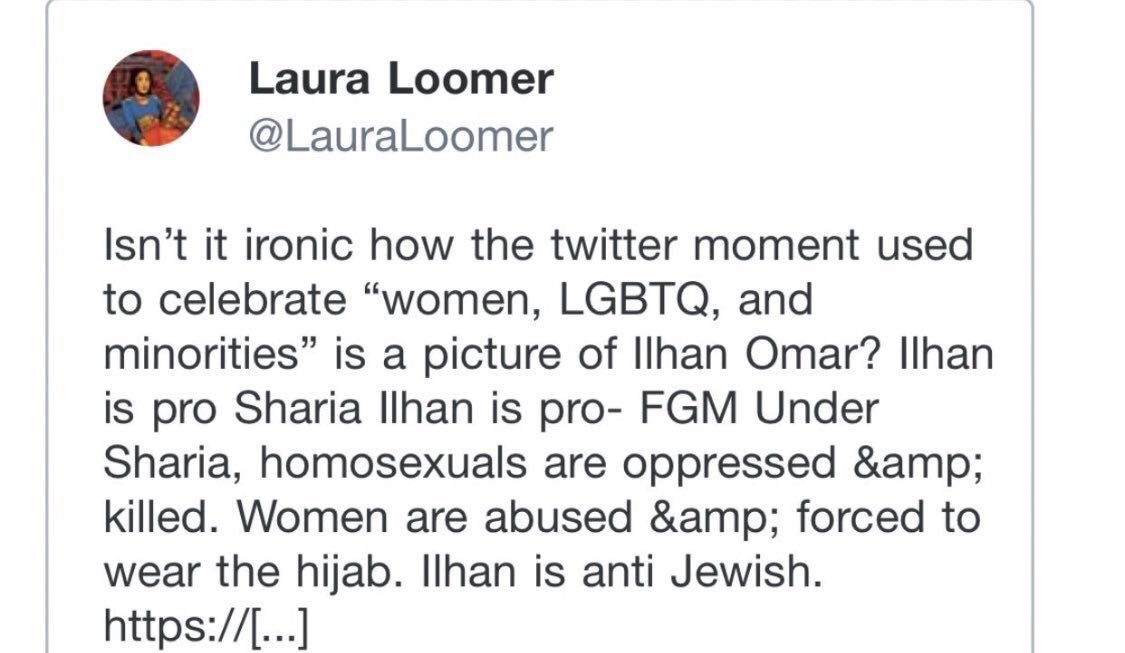 Here is one of Ilhan Omar’s most controversial tweets, widely condemned as perpetrating anti-Semitic conspiracy theories.

Whether Loomer was accurate in all the details of her criticism of a politician, her commentary was not out of line with what happens every second on Twitter in terms of political discourse.

Here’s Loomer’s explanation of what happened, including her simultaneous 30-day suspension from Facebook:

Why would Twitter single out Loomer? Omar is a politician and doesn’t hesitate to criticize others in the worst possible ways. The language used about Omar was mild in comparison to the vitriol heaped on Republican politicians.

Even people who are not fans of Loomer are defending her over the Twitter suspension.

I strongly dislike Laura Loomer. She even has me blocked. But, she should not be suspended for what she tweeted. Twitter is slowly banning right wingers. It started at the fringes and is now creeping to the center-right. pic.twitter.com/ZI49Q2R8Tp

I am not a Laura Loomer fan. At all. But, as others who also don’t like her have said, she shouldn’t have been kicked off @Twitter, especially when racist cretins like @LouisFarrakhan & @sarahjeong are still here unscathed. Disappointing @jack.

Laura Loomer not exactly a leading light of journalism. But I see no reason why Twitter would suspend a user for this tweet: pic.twitter.com/puf7BTB9qO

Of course there are others, like Michael Avenatti, who are celebrating:

.@twitter – Bravo for banning Laura Loomer, who trades in hatred, bigotry and conspiracy theories that target innocent people. People like her should not be enabled by Twitter. #Basta

Which is not surprising considering Avenatti was “Loomered”:

Perhaps the worst take was when prominent feminist author Jessica Valenti used the Twitter ban as an excuse to mock Loomer’s looks, which goes to show you that feminism as practiced by people like Valenti is a fraud: 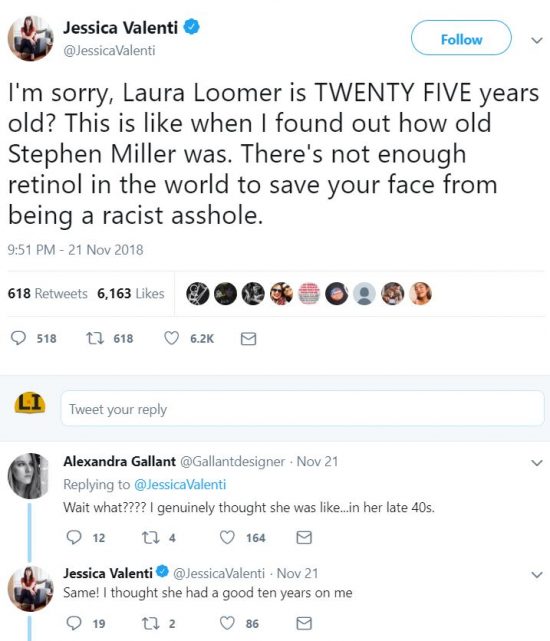 Unless there is a lot more to this, this looks like another Twitter targeted hit based on a double-standard of what is acceptable political discourse.

If you think social media deplatforming will stop at Laura Loomer, then you haven’t been paying attention.

Twitter executive and staff, are, in the majority, followers of the Pro-Choice philosophy, selective, opportunistic, and politically congruent (“=”). We are observing the progress of a society that is diverse (e.g. color judgment or racist), liberal (i.e. divergent), decadent, and amoral.

The Twitter Social Justice Thought Police are on the job again. Facts can never ge racist. They just are facts. Inconvenient facts. It is Social Justice itself that always ends up with exactly what it purports to prevent. Racism and Segregation.

Althouse:
Eventually, Jessica from a blog called Feministing, shows up and says: “The, um, ‘intern’ is me. It’s so nice to see women being judged by more than their looks. Oh, wait…”

Jessica Valenti: “I thought she had 10 years on me”

More irony. 12 years ago a young Valenti criticized Althouse for being a withered hag jealous of Valenti’s youth. Now she’s portraying exactly that.

Valenti is a famous icon of feminist hypocrisy – attending a lunch with serial sexual predator and (inadvertently) striking a Monica wannabe pose with Clinton for photographers.

It was the equivalent of Jesse Jackson kneeling beneath David Duke under the Confederate flag.

I’m currently in FaceBooo jail for commenting on a local news story. My comment? “A woman cannot run over her ‘wife.'”

That’s it. That’s all I said. I was flagged for ‘hate’ speech.

I hate government intervention or regulation, but it’s long been in place for the publishing industry regarding libel, complicity, negligence, facilitation, etc.

FaceBoo, tweeter, etc. have long abandoned any pretext of being mere platforms for open forums of discussion. They are obviously publishers which edit content, and should be held accountable and regulated as such.

I too was banned multiple times from Twatter, and am beginning to run into issues with Faceplantbook.

The double standards are breathtaking.

Zuckerberg’s got nothing to worry about. Belushi did that one in Blues Brothers in like 1980.

Just remove the protection Congress gave them as being those platforms (both twits and facebook) and admit they are content publishers with editorial capability exercised. The lawsuits platform status protects them from will take care of the problem.

Leftist socialist media no longer makes any effort to attempt to appear impartial. It is time to regulate them as public utilities, and destroy Suckerberg’s et al. power and monetary influence.

These entities have abused their position in society and will now incur the slow death of heavy handed government regulation.

Per the previous judicial ruling on Trump’s twitter account, wouldn’t this be a violation 1st Amendment per previous precedent?

Does anyone else here have this awful pop up of the top 5 articles here at LI ?

Yes. They keep popping up and covering 3/4ths of the entire page.

There is a small x hidden in upper right corner in black on black text to close the pop up if you can find it.

But I’ve closed it twice now and it pops right back up.

Thanks for the tip. I wanted to reply but couldn’t get to the submit button. – Had to delete twice.

Which is why I have popup blockers, ad blockers, etc. and never see any of them.

Right, but we all have different circumstances. For I stance, this is my 8th phone in 12 months. I don’t ha e time to fine tune all the settings and upload the same software and apps every time.

Regardless, the burden for pop up maintenance shouldn’t be shifted from the site to the guest. Not cool.

Speaking of which, have we even gotten the courtesy of a “sorry guys, everyone is on holiday but we are aware of the problem, please be patient “… ?

That is when I turned on ad blocking for LI, but also sent a donation.

Obviously, the tycoons have done the algorithms, and learned they didn’t need half of America to make money as they are Globalist, so throwing all of us out of social media is a win win for them.

They are using our laws to protect themselves

We are sunk unless viable options prevail.

I heard that Gab has started censoring conservatives also.

Yep, because they’ve found that unless you can build your own Internet and banking system, SJWs will force you to comply… and the government enables them.

To Fen: what is Breitbart’s Rule? Add clutter?

But seriously, he was a vociferous reader of comment sections, not just on his own site but many other conservative site as well. I doubt he would have been caught off guard by Trump.

If someone tweets and no one is there to read it, did the tweet make the proverbial sound?

Both Facebook and Twitter began as frivolous, and rapidly morphed into malevolent, with no useful stage in between. I’ve had, and have, nothing to do with either right from the start. The world would probably be a better place if more people did the same.

My understanding is that on twitter you can make statements like that to a group but when you make them about an individual you cross the line. Maybe if she had prefaced her comments with “Islamists like…” or “In the teachings of Big Mo, Ilhan Omar follows to the word…”, she could have gotten away with it. Probably not since Islamists are protected. That doesn’t excuse twitter in my mind. Everything she said was true and factual and she is public person who has a stage to defend herself that private individuals don’t.

The base motivator for these social media companies is simply fear. We like to think that these actions are taken because of an ideological perspective, on the part of the SM companies. But, it is actually based upon fear of being targeted for violence if they do not toe the liberal/Progressive line.

Conservatives, including Christian conservatives, do not accost people restaurants. They do not show up at their homes and harass them. They do not burn down people’s homers and businesses. They do not physically attack people on the streets. And, they do not go around randomly shooting LEOs. They do not gather in mobs to attack those who believe differently than they do. They do not fly airliners into skyscrapers. Guess who is responsible for all of these things. Now, which group of people might the leadership of the SM companies feel it is in their best interests to cater to, in the short term?

Same reason I left FacePlant – if they are going to ban you eventually anyway, why not leave on your own terms.

I know I’m getting older (a few years past starting my seventh decade), but if that picture of her is reasonably accurate then I think she’s a good looking young woman.