Twitter is a private entity and can enforce their terms of service as they see fit, but they’re not fooling anyone with the “impartial” schtick. 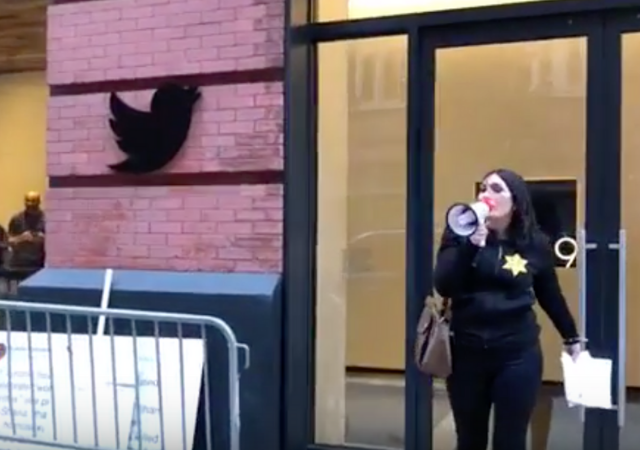 Last week, Professor Jacobson blogged about Laura Loomer who was kicked off of Twitter for criticizing incoming Congresswoman Ilhan Omar.

In protest, Loomer handcuffed herself to Twitter’s NYC headquarters.

Laura Loomer, a conservative activist and provocateur recently suspended from Twitter, handcuffed herself to a door outside the company’s New York City headquarters Thursday in protest.

“I’m here for the millions of conservatives who have been censored by Jack Dorsey,” Ms. Loomer said after shackling herself to Twitter’s headquarters Thursday, referring to the company’s co-founder and chief executive.

Twitter “notified the relevant authorities who are responding,” a company spokesperson told The Washington Times.

Ms. Loomer “was suspended for violating our policies,” said the spokesperson. “We apply the Twitter Rules impartially and not based on ideology. “

The incident ended after roughly 2.5 hours when New York Police Department officers used bolt cutters to sever Ms. Loomer’s handcuffs at her request, The Verge reported. She was not placed under arrest, the report said.

Twitter keeps claiming they are not targeting anyone based on ideology, but Loomer blew up tweets made by Nation of Islam leader, Louis Farrakhan that tell a different story.

Laura Loomer blew up Louis Farrakhan's tweet calling Jews 'termites' and showed it side-by-side next to the tweet that she was banned over where she called out Democrat Ilhan Omar for being pro-Sharia law and then listed off how Sharia law targets women and the LGBT community. pic.twitter.com/4d1CzZ8dQW

This is the tweet that Loomer blew up and put on Twitter's building.

She wrote underneath it: "NOT BANNED FOR HATE SPEECH."https://t.co/vK5O0fLQ0y

Here's a close up of the tweet of hers that she blew up.

She wrote underneath it: "BANNED FOR HATE SPEECH" pic.twitter.com/vHLORE7XOV

As Professor Jacobson pointed out, you’re only at risk of being deplatformed if you’re a “right-winger.”

Conservative pundit Jesse Kelley was recently suspended from Twitter. Only have two US Senators called attention to the issue was Kelly’s account reinstated. There’s a growing list of pundits and activists on the right who are being kicked off one of the largest social media sites for alleged “hate speech” while the anti-semites go untouched.

Twitter is a private entity and can enforce their terms of service as they see fit, but they’re not fooling anyone with the “impartial” schtick.

How can the banning of conservatives be nothing but embarrassing for the twats at Twitter!?!

They can do what they want, but they need to quit saying they are impartial.

…And I just repeated the last sentence. Oy!

I disagree. They are a Monopoly and can be regulated the same way as the cable company.

I think they have proven that they are all about the content of their site by their inconsistencies, so the rules of a business responsible for the content should be immediately and completely imposed.

A monopoly or practice, maybe. A utility, subject to regulation, likely.

Interesting that all these “Social Media” companies are Leftist, Anti-America, Anti-White, and Anti a Woman’s right to defend herself (own a gun)…coincidence or intentional?

This is being planned.

classify it as a public utility and watch the fun….

Well, there’s Gab.ai, and the unbearable political incongruence of free speech, equal not “=”.

There is also the preference of 0.1%ers, domestic and foreign, and super de-mocratic le-verage.

This is actually an important, even critical question. While there is evidence of monopolies and practices, what would it take to build and sustain an insurmountable margin?

Public subsidies, including welfare, is one. Private subsidies, including charity, is another. Increasing numbers, and reducing per-capita profit, is a third. Brand characterization (e.g. “conservative”, “progressive”), pro-native vs anti-immigrant, etc. is a fourth. Tolerance, not necessarily normalization, consistency, is a fifth.

“Net Neutrality” is about shared responsibility, or subsidizing broadband producers.

She’s got energy. How can we support her?

I’ve often asked the same question myself. I’m disabled and have cognitive decline because of it, there’s not much I can do. But if a 20-year-old Zuckerberg can create Facebook, and a bunch of twentysomethings with zero business savvy can create Twitter, why the F can’t we create a functioning business in this sector? Supposedly, creating economically Viable business is is what we do, but we are total strikeouts in every part of social media.

But besides the normal technical ramping up issues they have other problems. Microsoft, Amazon, ISPs, payment providers are blackballing them. Gab in particular.

This one should have interned with James O’Keefe to learn the finer art of investigating and exposing evil.