He funded the worst of the worst, then played dumb and blamed it on others in his foundation. 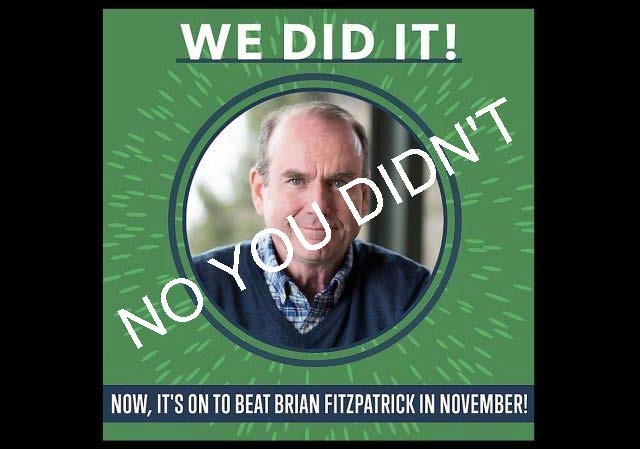 As explained in our post, Wallace claimed he was unaware and blamed some unnamed other person in the foundation. Wallace’s campaign, however, has never responded to our inquiries as to what Wallace knew, and when he knew it. That’s important, because Wallace’s foundation funded the worst-of-the-worst BDS groups, as I explained in that original post:

You may not have heard of Haymarket Books, but it’s a crucial player in the national BDS movement. That Wallace’s foundation knew to fund Haymarket and its parent entity shows a level of planning sophistication and understanding as to how money is moved around among anti-Israel activists.

Haymarket is the publishing arm of the Center for Economic and Social Research (CERSC), the 501(c)3 arm of the International Socialist Organization (ISO), a ‘revolutionary socialist’ organization. CERSC’s other activities include publishing the International Socialist Review (ISR), sponsorship of the annual “Socialism Conference”, and hosting and publishing the vehemently anti-Israel blog, Mondoweiss.

Named after the Haymarket Affair of 1886, a defining moment in the history and mythology of the labor movement (May Day is sometimes said to commemorate it), Haymarket’s very first book, in 2002, was not concerned with labor rights, rather it was titled The Struggle for Palestine, a collection edited by ISO veteran Lance Selfa.

Palestinian activism has been a central motif in Haymarket’s repertoire ever since. Perusing Haymarket’s category on ‘Palestine’, one finds many books, some of which have achieved canonical status in the Palestinian nationalist, anti-Israel, Boycott Divestment and Sanctions(BDS) movement. Authors include: Angela Davis, Steven Salaita, Ali Abunimah, Omar Barghouri, and the obligatory titles by Noam Chomsky and Ilan Pappe. Titles range from the dreary and unimaginative: “Boycott, Divestment, Sanction: The Struggle for Palestinian Rights”, “Against Apartheid” and “Apartheid Israel” to the more romantic “Midnight on the Mavi Marmara”. Also among the titles is Jewish Voice for Peace’s latest tract, On Antisemitism,whose primary subjects seem to be ‘Islamophobia’, ‘Palestinian Solidarity’, and ‘Resistance’ to our 45th President, and whose main concern with antisemitism is to absolve all attacks on Jews or Jewish causes as ‘not-antisemitic’ and to focus instead on ‘Palestinian Resistance’. Noteworthy as well are Ali Abunimah’s The Battle for Justice in Palestine and Steven Salaita’s Uncivil Rites: Palestine and the Limits of Academic Freedom.

Other titles include numerous Marxists texts, texts on Black Politics, and a treatise on Mansplaining (recently featured in the NY Times). A particular penchant at Haymarket is for the recent politicization of sports, contracting several books by the Nation’s David Zirin, and recently announced a book with Seattle Seahawks Defensive End, Michael Bennett, titled “How to Make White People Uncomfortable”.

When Democrats decided to run a virulent anti-Israel candidate in @ScottWallacePA, the RJC spent $530,000 to tell #PA01 just how bad he is. https://t.co/zVWdqv35DM

We are thrilled that @BrianFitzUSA has won Pennsylvania's 1st Congressional District! pic.twitter.com/XPm4EHMi9Z

I don’t live in PA-1 but have been over there a few times in the last few weeks.

I do live there, and have to say how uncomfortable I am with the narrowness of Fitzpatrick’s victory. If a moderate Republican can only beat a far-left BDS-loving carpetbagger by 2 points in Bucks County, PA, there’s something rotten somewhere. Maybe it was the PA Supreme Court-ordered gerrymandering.

P.S. You’re right about those big Fitzpatrick signs — they’re everywhere, and include some pretty unexpected endorsements!

So even all the gerrymandering by the PA Supreme Court couldn’t elect this creep. Good news.

I too live in Pa-01. Even when it was Pa-08, it was a swing district, so I wasn’t too surprised by the tight race. Brian’s a nice guy and all, but he doesn’t appear to have much conviction. I follow the local races closely and still don’t really know what he stands for, or against. Meanwhile, a lot of the lefties here – and there clearly are plenty – are really at the fringe and have no clue about Wallace’s history.

What kept me in stitches about Wallace were his stupid commercials that ranted about how Fitzpatrick was a tool of the oil industry. Those ended with, “How’s that working out for you at the pump.” The moron clearly has never pumped his own gas. I’m paying a lot less now than during the Obama years.

How do the Democrats get away with being the Party of Anti-Semitism?