“How is this different than Trump referring to CNN as ‘fake news’?” 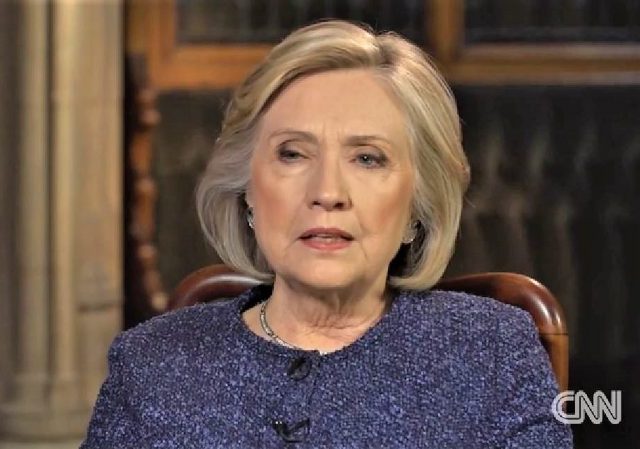 Twice-failed presidential candidate Hillary Clinton has taken a break before launching her unofficial 2020 campaign tour to chat with the Guardian about the  propaganda she perceives on Fox News.

She also claims that the U. S. media needs to “get smarter” in its response to President Trump and Republicans.

Hillary Clinton has criticised the US media over its coverage of Donald Trump, calling on the press to “get smarter” about holding to account a president who is a master of diversion and distraction.

In an exclusive interview with the Guardian, Clinton also offered a stinging rebuke of the Republican party’s base, saying it had become enthralled by the president’s “insults and attacks and entertainment and spectacle”.

“The Republican party has collapsed in the face of Trump,” she said.

Clinton also criticised Trump’s repeated attacks on the press, behaviour she suggested had echoes of authoritarian and fascist political leaders who erode faith in facts and evidence. She said Trump had proved himself skilled at “tweeting and insulting and dominating the news cycles” and said he was too often left unchallenged by the press.

“I believe that where we are now in the political cycle is that the press does not know how to cover these candidates who are setting themselves on fire every day, who are masters of diversion and distraction,” she said.

. . . .  “So at some point, the press has to get smarter because that’s basically how most voters get their information,” she said, adding that often the quest for “balance” resulted in facts being relegated in favour of opinion.

“If you’re into both-side-ism – so, you know, on the one hand this, and on the other hand that – really there’s no factual basis, there’s no evidence, there’s no record. Everybody lies, everybody gilds the lily. It doesn’t really matter. That just opens a door to somebody like him.”

Additionally, Clinton announced that Fox News is “superb propaganda” and “a wholly owned subsidiary of Trump and the Republican party.”

In an interview with the Guardian, Clinton absolutely lit up Fox News — referring to the network as “a wholly owned subsidiary of Trump and the Republican party now.”

“You watch Fox News, it’s always, ‘Something terrible is about to happen’, ‘Something terrible did happen’, ‘These people are doing all these awful things,’” Clinton said. “It is totally divorced from reality, but it is superb propaganda. I don’t know the best way to puncture that. You have to hope that reality catches up with politics and entertainment at some point.”

Left controls every social media platform, all of TV/ Film and 99% of news outlets. Is that not enough Democrat ran media for you??

#CrookedHillary atacking the Free Press, the 1st Amendment and our democracy

How is this different than Trump referring to CNN as “fake news”?

Where are all the reporters to call her out for this and say it’s an unacceptable attack on the free press? https://t.co/e8tdtj04tI

@cnnbrk @MSNBC @maddow @donlemon @NBCPolitics @CBSNews where is your outrage on @HillaryClinton calling out @FoxNews ? Or is it just Trump hate and bias reporting on your part?

Why wasn’t this corrupt, exoskeleton-in-a-muumuu laughed off the public stage 20 years ago?

Oh yeah – our country is full of idiots.

Sore loser full of sound and fury and signifying nothing.

Also a cheap crook and a grifter–and those are her admirable qualities.

Fox News joined in with the rest of the journalism crowd to defend Jim Acosta. I’m sure CNN is really grateful. (sarc)

Wasn’t she supposed to be dead by now?

Maybe she is, and the horror of hillary clinton continues as a zombie.

In any event, we have this malignant sow to thank for single-handedly saving our Republic by hogging the DNC nomination and predictably blowing a rigged election by virtue of her astounding incompetence.

Other than treason, corruption and astounding incompetence, hillary clinton will be remembered most by the right for single-handedly bringing the leftist house down when it was on the verge of completely seizing power in the United States.

Damn, I despise this woman.

It took me a while to figure out what that first picture reminded me of:
http://jeb.biologists.org/content/218/13/1975.2

The traditional press, newspapers and televised news, are a dying breed. More and more people are leaving these traditional outlets and getting their information from sites like this one.

“You watch Fox News, it’s always, ‘Something terrible is about to happen’, ‘Something terrible did happen’, ‘These people are doing all these awful things,’” Clinton said. “It is totally divorced from reality, but it is superb propaganda. I don’t know the best way to puncture that. You have to hope that reality catches up with politics and entertainment at some point.”

It’s not just Fox. All of the traditional news media does this. Why? Because it equates to newspapers sold, or ratings for the televised news. That’s what grabs the attention of the low information voter in the major metropolitan centers that you concentrated on while campaigning. Fortunately, we are starting to see the light at the end of the tunnel as more and more people are turning to non-traditional sites for their information. And guess what? Trump, whom you loathe, has figured out how to puncture it. Trump and his campaign team studied what matters most to middle America and gave them what they wanted.

It’s a new age Killary, those that fail to adapt will die an ugly death. You certainly have the ugly part down.

And while CNN censors content critical of them, that never happens on conservative sites.

Because we are better than that. We have principles.

When the day comes and Hillary meets her just reward, I believe the Devil will need a 10 minute head start to depart.

Nah – he’ll just use a pitchfork with a longer handle.

If Trump were a real “authoritarian fascist”, this filthy slimy whore would be dead or in a dark dank dungeon cell, not on TV spewing her vomit like that gal in the Exorcist.

The lizard look really does work for her.

Geez, are you all 14 adolescents males?

I don’t like her, I abhor her, but stop the derogatory comments about her looks

Gonzo, there’s something to be said for the long term effect of a person’s inner being on their outer appearance … she has certainly nursed anger, bitterness and hatred over many years and her appearance would seem to mirror that.

And for the person of faith – well – does she speak words to build people up, or spew unwholesome talk to tear people down? Yeah, I know that cuts two ways – but man I don’t think I’ve ever heard her speak kind words about someone politically/ideologically opposed to her. Regardless of how she looks, what I hear coming from her mouth makes her seem ugly to me.

She had grotesque thighs when she was much younger.

Beauty is skin-deep. Ugly is to the bone.

In spite the fat, we can see clinton’s bones.

Althouse tags that as “civility bullshit”

Here is how the Left criticized conservative women in 2000.

“The Washington Post, a great newspaper, publishes this description of Mrs. Harris: “Her lips were overdrawn with berry-red lipstick–the creamy sort that smears all over a coffee cup and leaves smudges on a shirt collar. Her skin had been plastered and powdered to the texture of pre-war walls in need of a skim coat. And her eyes, rimmed in liner and frosted with blue shadow, bore the telltale homogeneous spikes of false eyelashes. Caterpillars seemed to rise and fall with every bat of her eyelid, with every downward glance to double check–before reading–her latest ‘determination.’ ” Her mouth is “set in a jagged line.” She has “applied her makeup with a trowel.” “One wonders how this Republican woman, who can’t even use restraint when she’s wielding a mascara wand, will manage to . . . make sound decisions.”

To say nothing of all the horribl jokes they made about the looks of their own Democrat females like Linda Tripp, Monica Lewinsky, Kathleen Wiley, Paula Jones. Didn’t hear a peep out of “feminists” back then. Hell, it’s where Fen’s Law originated to begin with – from watching the Left attack these women after a decade of lecturing the rest of us about sexual harassment in the workplace:

And I doubt any conservative women would leave the GOP over criticism of Hillary Clinton’s looks. They do not play in the kiddie pool. They are made of Kitari metal fibers 🙂

Way too much channeling Twitter here lately. Abhor it but feed it is not a great plan.

Women are tired of being judged on looks, which disappear pretty quickly in reality, as do men’s, but you are not judged as women and it fuels the feminists agenda.
Keep it up and conservatives will continue to lose women.

This is how you lose the argument, judging women on their physicality

By the way, if that ad pop up doesn’t disappear, I will

“Looks” don’t mean you have to look like a model. It means – man or woman – you are groomed, weigh-conscious, clean-looking and pleasant.

Iwm
Bet you were another Rock Hudson yourself, or do we call you Arnold?

No impact. No idea.

Men aren’t judged by their looks, they are judged by how much money they have.

Because she’s not President? For which I try to be thankful around this time of year.

What with Donald Trump having given the media a-goin’ over for two years or so and more people having become aware of its fakery maybe her concern is what this might imply for how they’ll treat her, should she decide to run again.

““The Republican party has collapsed in the face of Trump,” she said.”

What a curiously revealing statement coming from Hillary. Would the GOP not insist on continuing to circle their wagons to protect the failing Dems since 2016, Trump would have accomplished so much more. Without those RINOs, there are now fewer wagons available. The circle is shrinking.

Collapsing in the face of opposition is what the GOP does. They are collaborators not an opposition party. The Stupid Party.