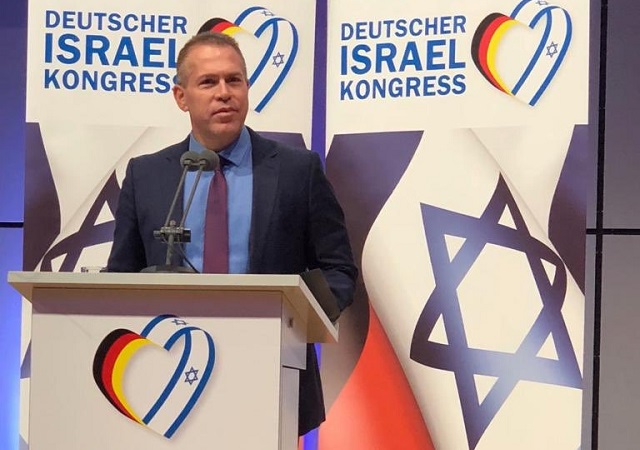 Amid rising antisemitism and anti-Israel activism in Europe, over 3000 members of Jewish diaspora and supporters of Israel gathered in Frankfurt, Germany, for the 5th German Israel Congress this weekend. Widely regarded as the biggest pro-Israel event in Europe, the conference was attended by leading politicians, government officials, and public figures from Germany and Israel.

“Germany should take a more aggressive stance against the Iranian regime,” Minister Erdan said. “It was only yesterday that President Rouhani called Israel metastatic cancer. History has taught us that anti-Semitic threats from fanatical leaders, and exporters of terror who have hegemonic aspirations, must be taken seriously.”

Presently, Chancellor Angela Merkel is spearheading a European campaign to circumvent the latest round of U.S. sanctions against Iran in an attempt to coax the regime into keeping the Obama-era nuclear deal alive. With backing from Germany and France, the European Union is scrambling to create a non-dollar trading mechanism to shield European companies and banks engaged in sanctions-busting with Tehran.

Erdan also raised the issue of European and EU funding for the anti-Israel boycott movement (BDS).

Earlier this year, an official Israeli study exposed links between the international BDS movement and Palestinian terrorist groups. The BDS campaigners in the West are “relying heavily” on the propaganda generated by Islamist terror groups, the report revealed.

I had the pleasure of serving as the keynote speaker at the largest pro-Israel gathering in Europe. My grandmothers both survived Auschwitz. Yesterday I represented the Jewish State before thousands of Israel’s supporters in Germany.  #DILK18 1/4 pic.twitter.com/csyTe8hUNJ

“Germany should take a more aggressive stance against the Iranian regime … It was only yesterday that President Rouhani called Israel metastatic cancer. History has taught us that anti-Semitic threats from fanatical leaders, and exporters of terror who have hegemonic aspirations, must be taken seriously.”

“Changing the behavior of the regime is what the Iranian people want, that is what the Gulf States want, and I call on Germany to join the US sanctions against Iran, and if Germany does so, other European countries will do the same.”

The mayor of the city of Frankfurt Uwe Becker, a Christian conservative politician, who inaugurated the conference, described the event as a “beacon of solidarity with Israel in the most pro-Israel city outside Israel.” Becker called upon the German government to recognize Jerusalem as Israel’s capital.

Uwe Becker mayor of Frankfurt in the israel Congress “ Jerusalem is the capital of israel ????????”#DILK18 pic.twitter.com/RHUzddWYQH

On a personal note, it was an opportunity to meet old friends,

Always a privilege being with my good friend @iUniyal, who is doing truly inspiring work leading @Indians4Israel, in harnessing grassroots support for #Israel in the #Indian community! #DigiTell18 pic.twitter.com/qQWSOe2Wq0

and make some new ones.

The former Miss Iraq, Sarah Idan, was among the honored guests at the conference. Idan was forced to flee Iraq after receiving death threats for taking a harmless selfie with Israeli contestant Adal Gandelsman during 2017 Miss Universe pageant.

One of the few beauty queens who really means it when she says she wants world peace: Sarah Idan, the Israel-friendly Miss #Iraq, at the #Israel Congress in Frankfurt. #DILK18 pic.twitter.com/UHWSYKchUx

The conference organized to highlight solidarity with Israel and the Jewish people was overshadowed by an attack on a female Israeli journalist in Berlin. A group of migrant men threw a firework at the young TV reporter Sunday evening after disrupting her coverage, German newspaper Die Welt reported.

Antonia Yamin, a correspondent for Israeli channel KAN, described the assailants as migrant men between the ages of 18 and 19. She “was speaking Hebrew during the reporting. This could have agitated the four young men,” the German newspaper concluded. Apparently, in Merkel’s German it’s enough to speak Hebrew in public to provoke a violent reaction.

The incident is a grim reminder of the resurging antisemitism in Germany in the wake of the recent migrant wave. Seven decades after the Holocaust, Walking-While-Jewish is once again an invitation to verbal abuse and physical assault on German streets.

That is going to be a security nightmare