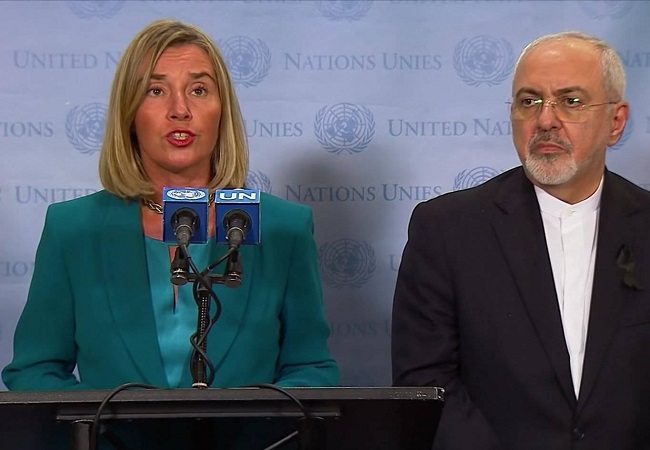 The European Union may switch to non-dollar transactions to protect its trade with Iran in the wake of the latest U.S. sanctions, Reuters news agency reports. The news comes as Iran’s European trading partners are working to set up a Special Purpose Vehicle, which is a payment clearance house where Iran’s proceeds from oil and gas sale could be offset against the country’s purchases — much like a transnational barter system without financial transactions.

The move is in response to crippling sanctions imposed by President Donald Trump against Iran’s energy, banking, and other sectors earlier this month.

However, the plan to create such a clearance house has run into rough waters even before it could get off the ground. No EU member state has so far agreed to host the Special Purpose Vehicle. Austria became the latest EU member state to decline Brussels’ request to manage the mechanism. “Austria to Defy Trump by Handling Iran Money,” Bloomberg gleefully declared earlier this week. Those hopes have now been dashed, Austrian newspapers report citing the country’s Foreign Minister Peter Guschelbauer. Brussels hopes are now set on tiny Luxembourg, a landlocked city-state in Western Europe.

Reuters reported the details of the latest EU concoction to save the ill-fated nuclear deal:

A special European Union initiative to protect trade with Iran against newly reimposed U.S. sanctions faces possible collapse with no EU country willing to host the operation for fear of provoking U.S. punishment.

EU diplomats said the main European powers – Germany, France and Britain – would raise pressure on tiny Luxembourg to host the so-called Special Purpose Vehicle (SPV) after Austria refused to manage the plan and left it on the brink of collapse.

The SPV is a kind of clearing house that could be used to help match Iranian oil and gas exports against purchases of EU goods in an effective barter arrangement circumventing U.S. sanctions, based on global use of the dollar for oil sales.

Fearing U.S. reprisals, European financial institutions are shying away from being party to the EU plan. Even the EU-owned European Investment Bank (EIB), set up to further the bloc’s policy objectives, has refused to back EU efforts to bankroll Iran’s fledgling economy. Bank’s “global operations would be put at risk if it were to invest in Iran,” EIB President Werner Hoyer said in July 2018.

Germany, the driving force behind the EU’s push to save the Iran, is also having problems convincing its banking system to support the payment mechanism. “Despite Berlin’s pledge to keep the Iranian nuclear deal alive, German banks are so scared of breaching US sanctions that they are refusing to process payments from Iran,” German business newspaper Handelsblatt reported early October.

While the Eurocrats trip and tumble to get the trade mechanism in place, the regime in Tehran is facing the biggest economic crisis in its nearly 40-year history. Its currency rial has been in a free fall, dropping 140-percent in value, since the Trump administration pulled out of the nuclear deal six months ago.

According to the latest projections made by the International Monetary Fund (IMF), Iran’s inflation rate “will jump to over 40 percent by the end of the year.”  The projection “largely reflects the expected impact of the re-imposition of U.S. sanctions on Iran, which is likely to reduce Iranian oil production and exports significantly over the next two years at least,” the IMF disclosed earlier this week.

Tehran is trying to stabilize the rial and boost public confidence by staging Sharia-style public executions of currency traders. This week, Tehran executed two prominent currency dealers for “spreading corruption on Earth.” The regime has set up special courts to clamp down on “economic crimes” under direct orders from the country’s highest authority, Ayatollah Khamenei.

The show trials and public executions are part of the regime’s efforts to divert attention from its own failures. Mullahs have squandered billion of dollars they received from the Obama administration for the nuclear deal on military adventures, including in the conflicts in Syria and Yemen. Since President Trump pulled out of the Obama-era deal in May 2018, Iran has witnessed a fresh wave anti-regime protests. In recent months, several Iranian cities, including the capital Tehran, have held violent demonstrations.

Time to review all of the subsidies we pay out to European countries and the EU. Also time to renegotiate NATO.

As they say, NATO stands for: Needs America To Operate

NATO cannot save Europe from her bad decisions.

Perhaps America needs to review why it stations so many troops across the EU eh?

What people don’t realise is that the American military is a MAJOR contributor to local economies and pulling these out of certain countries would have a MASSIVE impact on the economy of those countries (just ask the Philippines).

I live in an area in the UK that has…sorry, HAD, a number of smaller American airbases which began closing and transferring personnel, services and equipment to places like Lakenheath and the impact on the local economy has been massive! Jobs have been lost and economic investment and activity has moved to other areas of the UK.

If the EU believes it can live without America then let it put its balls on the chopping block and actually start living WITHOUT American money!

Sounds like you’ve figured out why Congress refuses to close military bases in the US even after the Pentagon requests it. Where I live, there’s a ton of military (mostly Navy) and we could see the effects of taking one carrier battle group out of the fleet during Obama’s military cuts. Maintenance overhauls that had been planned for years all ground to a halt and the region lost about 5,000 shipyard jobs every year that we didn’t have the money to service our ships.

Secondly, f the EU is so keen for this why not host it in Brussels???

The anti-democratic European establishment is trying to hold on to power by turning the U.S. into a scapegoat. Every dictatorship needs an external enemy.

“Tehran is trying to stabilize the rial and boost public confidence by staging Sharia-style public executions of currency traders.”

I’m sure that will produce their desired result.

Well, it’s cheered me up, for whatever that’s worth.

Europe seeks love in all the wrong places.

the US Military has kept the peace in the EU like a parent does over her kids.
time for the kids to grow up AND let the parents off the hook for their own responsibilities.

as for Iran – the EU will soon enough be a sharia land –
if people choose not to reproduce then they are finished PERIOD. –

The EU might wish to avoid the sanctions and join some individual European leaders in doing so, but banks and other businesses are not going to be so willing to go along with their governments. Sanctions will further turn Iran’s feeble currency to junk and the same with its economy. These banks and other global businesses would like to stay on the good side of their other far flung markets. The US included. Everyone involved needs to make some very good decisions right about now.

“…with no EU country willing to host the operation for fear of provoking U.S. punishment”

See how that works, GOP?

“Landlocked city-state” . . . that’s so cute. A much more relevant short description would be “one of Europe’s premier financial centers” (that’s pronounced “tax shelter”), the home base of well over a hundred banks and trillion$ in mutual-fund shares. But in Luxembourg they know what money is and where it comes from, and I can’t see anyone there falling for this.

Maybe they can try to set something up in Antiqua or Barbados, or the Cook Islands, or maybe Jersey to keep it in Europe. Any one of those would get filthy rich off something like this . . . while it lasts. After that, le deluge.

I wonder how many EU bureaucrat’s palms are being greased by Iran.