“The malfunctions resulted in the loss of more than a day’s work.” 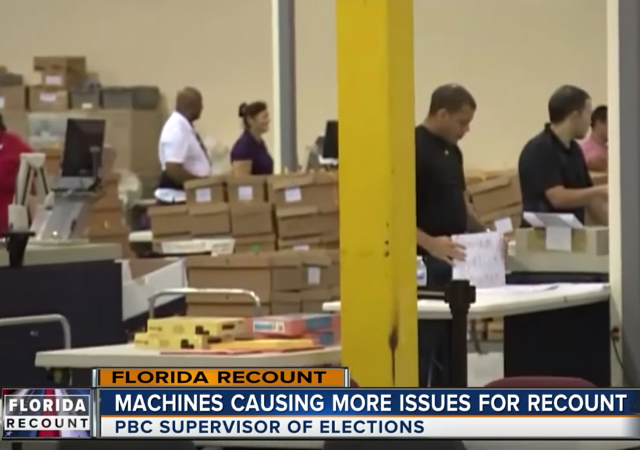 Why, Florida? WHY?! Just when it looked like Palm Beach County had better sailing than Broward County, news comes out that aging equipment has overheated and caused mismatched results. From The Miami Herald:

The department has flown in mechanics to repair the machines.

“We’re disappointed by the mechanical problems that are going to cause a further delay in the recount,” Bucher told reporters. “It became evident through the vigorous pace of counting that the machines used for the recount were starting to get stressed.”

The malfunctions resulted in the loss of more than a day’s work.

Palm Beach County received an extension yesterday after officials said it would be impossible for them to reach the 3PM deadline set for this Thursday.

They now have until November 20.

These people are bound and determined to create a mess where none existed. They criticized Trump at the debate for not fully committing to accepting the election results.

It turns out that Democrats will not accept unfavorable election results and are determined to sacrifice all comity for victory.

Here we have an example of the dead vote too…The Gillum Zombie Vote is in…
https://www.youtube.com/watch?time_continue=311&v=lwM-Ui3bUvU

Trump is right, there is no way to get an accurate count out of Broward; either just toss their votes entirely or use the completely random count obtained on the day of the vote.

Nobody can say with a straight face that an organization that even do a simple count of votes is able to ‘find’ votes, ‘cure’ votes, ‘interpret’ votes, etc.

…can’t do a simple count…

My experience with counting machines is that when the humidity goes up, the paper swells and the machines jam.

Then, when you try to remove the ballot it is usually shredded. And, a make up ballot is re-created.

Humidity also wreaks havoc on electrical contacts in connectors – wet-dry cycles cause oxidation. Living in a marine environment I’d guess half the failures of computers and music / stereo equipment I’ve serviced are easily fixed by cleaning connectors and plugs and re-seating circuit boards.

I wonder how old those counting machines are? What non-use storage practices are observed – whether they’re desiccated …

Said make-up ballot being an opportunity to replace it with a Democrat-leaning one. Also, hand recounts are an easy opportunity for fraud. It’s harder for overseers, if they are any, to watch what 50 people, and those feeding them ballots, are doing compared to a couple of machines.

Oh. Machines. As in ‘more than one?’ which require ‘out-of-town’ experts to fix?? How convenient.

Here in Missouri, we have our own technicians on-call during elections. But, apparently, one cannot spell ‘fuster cluck’ without Florida.

Four hundred & fifty-eight PBCs available, yet the ones in the supervisor’s office just happen to burn up and require ‘out-of-town’ experts to fix.

There are wide discrepancies. Which scan is likely to be more accurate? (Florida law says 2)

When I lived in IL and voted at a precinct station, they ran my vote through a scanning machine while I watched. I had a receipt / sticker to prove I voted, but the only thing the scanning machine gave me was a satisfying beep and green light. It do wonder what would have been their reply if I asked for a printed receipt to confirm it accurately scanned my choices.

You lived in Illinois, you say? Well, then, if you voted a straight Democratic ticket, chances are extremely excellent that your vote was recorded with perfect accuracy.

Thankfully, I escaped IL back to my native WA where my party-line vote for R’s means absolutely nothing. At least it smells like fresh pine here and not pig squat.

Here in Brevard County, Florida, the votes are tallied throughout the day at the precincts as each person submits their vote.

At the end of the day, the votes are re-run through the machines at the precinct and the totals are verified.

Our machines are older than Palm Beach County as well as they were purchased prior to the 2000 election.

Why the machines are recounting anything other than mail in ballots and ballots that were kicked out because the person cannot fill in an oval makes no sense other than looking for votes.

This is incompetence at the highest level.

Our entire representative form of government is based upon the concept of an honest electoral process. Since the inception of this nation we have been arduously working to establish and maintain this process. But, historically, various factions have striven just as hard to subvert the system by various means, usually outright fraud. So, when the actions surrounding the voting process are abnormal, in some way, the populous wants to have a reasonable explanation for these abnormalities. Unfortunately, no such reasonable explanations have been forthcoming in the case of Broward and Palm Beach counties.

But, in the case of Broward county, there is something else to consider. Political cover. Some of the problems in Broward may actually rise to the level of criminal violations. They are evidence of vote fraud within the Broward SOE office. And, similar problems, which may have affected previous political contests, have occurred in this office, under this Superintendent, previously. In order to dispel the specter of widespread electoral fraud, the Democrats are actively building an incompetent boob defense, for Brenda Snipes. “It wasn’t fraud, it was incompetence”. The Democrat Party will survive without Gillum as Florida Governor or Nelson as US Senator. But, it will have a hard time surviving if people get the idea that widespread vote fraud is being perpetrated by Democrats. So, this is incompetence, not fraud.

Remember, the machines which overheated and broke down were the same machines which were used to scan six times the number of ballot sheets during the election count as they are counting during the recount. What does that say about the accuracy of the initial absentee vote count? And, was the count done by the DS200 scanning machines in the polling places any more accurate? The whole castle of the Florida election process looks solid from a distance, but turns into a steaming pile of excrement, if one stands too close to it.

Just to be clear, I addressed both the problems in Broward County and the problems with the scanning machines in Palm Beach County. And, my statement that these machines had been used to count more ballots during the election was inaccurate. These ballot counting machines were only used for mail-in and provisional ballots during the initial count. Both Broward and Palm Beach counties use a polling site based ballot scanning system, for most ballot scanning. Sorry for the mistake.

If the parties were reversed….a Democrat DOJ would be in Florida under the aegis of “civil rights” issues. Since only Dems have civil rights that need defending this will not happen now. So, a judge has ruled no precautions need to be made to protect the votes….only after fraud is found then the judge move to protect….after the damage is irreversible.

As for Georgia….look for a very sympathetic (Leftist) judge ruling for Dems. They need time to count every manufactured vote.

Are these some of the voting machines that were invested in by Nazi collaborator George Soros? He is also invested heavily in his Secretary of States Project. Has it been paying dividends, here or elsewhere? Why would he invest in something like that?

My personal choice and recommendation is to stick with paper ballots. Voting machines are just that – machines. They can and will break down or be tampered with.

Soros was not a nazi collaborator and it’s disgusting to accuse him of it. He has political views to which we take great exception and view as destructive, but that is not an excuse for libeling him, especially with such a vicious smear.

The smear garbage blurs the fact that Soros has and does use his wealth to advance his agenda. He has shown he has no problem damaging institutions because he can…for personal gain.

It’s his wealth, he built that, so he’s entitled to use it for whatever purposes he likes, including advancing destructive and wrong-headed policies. Condemn him for that all you like. But it doesn’t justify making up lies about him, especially such a vicious one as this.

Leftists like to claim that any criticism of Soros is antisemitic. That’s bulldust. Some criticisms of Soros do seem to be tainted with antisemitism. This doesn’t seem to be one of them, but it’s still despicable.

Stalin is a patron saint of the Democrat Party.

If you believe this horsesh1t, you are a dumba55.

The optimist will note that they are only operating “counting machines”.

Where s the anger from the Republicans?

At this point, are they trying to so obscure and obfuscate the election results as to force it to a “coin toss”? I can hear it now – “Heads D’s win – Tails R’s lose.”

They can’t even get the machines to count on time. That said, there are third-world nations that are more functional and with more integrity.

What is really funny is that Miami-Dade is just as big as both of these counties and were done with counting either on election night or the next day.

It has now gotten to the point that whenever I see Palm Beach or Broward I have this image of Brenda Snipes running trying to keep votes out of peoples hands and the Benny Hill theme playing in the background.

The really sad part is that both of these corrupt and incompetent idiots make big bucks in these jobs, both positions pay 170.000 + a year.

Nobody believes this is accidental.

They are going to “fix” the machines. No worries. Everything is going to be fixed.

Take all the Broward/Palm Beach votes and throw them off the emd of the pier.