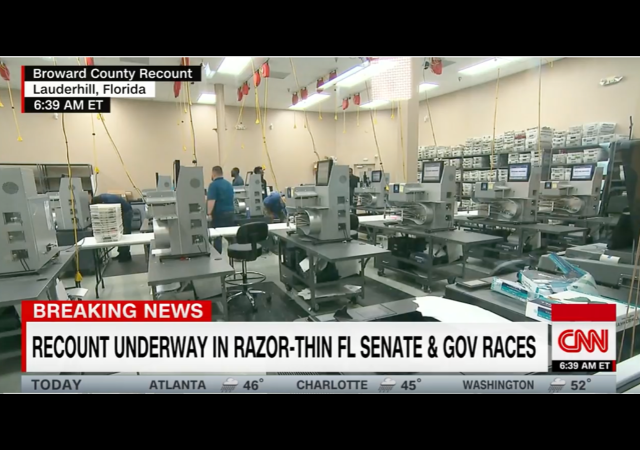 A judge has extended the recount in Palm Beach County to November 20. The original deadline was this Thursday. From The Palm Beach Post:

The extension comes out of a lawsuit filed by Bonfiglio, who is losing to Caruso by 37 votes. Bonfiglio told The Palm Beach Post on Tuesday afternoon that he was in a conference call with circuit Judge Karen Gievers around 1 p.m. during a case management conference concerning the lawsuit he filed to extend the deadline to allow time for a recount in his race.

Bucher said officials could reach the deadline if they only had to recount the Senate race.

If they couldn’t make the deadline, then the county’s “final vote tallies in the governor’s race, the agriculture and consumer services commissioner’s race and Bonfiglio’s race would be the results Bucher’s office submitted to the state on Saturday.”

Who needs laws when you have JUDGES?

Got to have time to find enough votes!

This needs to go to the Supreme Court

It is the United States Senate that is the final judge of its elections — not the Supreme Court. They have chosen not to wield this plenary Article I power:

Each House shall be the judge of the elections, returns and qualifications of its own members …

“You’re out of time, by law, but I’ll give you an extension. Get it done on time, or I’ll have to give you another one!”

I gave you an up vote, but I think for the moment it’s best that Cocaine Mitch keeps his mouth shut and his powder dry and waits to see what this dumpster fire produces. If Scott wins, seat him. If Nelson wins, reject him.

I am definitely a partisan, but what I propose is definitely not partisan. Right now Scott is up by 12,000+ votes. Never in the history of this country has a recount flipped the win to the loser with that kind of a margin. If Nelson comes out on top, that would be prima facia evidence of massive fraud. Fraud on such a scale it would make a Middle Eastern dictator blush. It might even embarrass a Chicago mayor.

It’s beyond the realm of possibility that Nelson could in any sort of non-corrupt fashion overcome that kind of margin.

Good point! The Palm Beach County Supervisor of Elections is responsible for procuring and maintaining voting equipment. By her own admission the voting her scanners are old, worn out, no long made and hard to find parts for. Now she is saying that they can’t handle the stress of the recount. So when they don’t make the Nov 20 legal deadline a judge will over rule the klaw and give them as much time as they need. Rule oif law indeed!

Just a reminder from Bush Gore:

This reminds me of the 1972 Olympic Gold Medal game between the US and USSR.

The US won the game but a Soviet official who had no authority appealed to the referees to repay the last 3 seconds on a timeout controversy.

The US team won again.

The Soviet official appealed again and the referees again acquiesced.

The Soviets made the shot on the third try and were awarded the gold medal.

The Democrats took notice, and have used this playbook again

If they drag this out long enough, the winners’ terms will have expired, and the whole issue will be moot.

Not BTW: Who is the judge and what is/was his/her party affiliation?

Is this judge changing Fl. law?

Yes. Isn’t that what judges do nowadays?

They must keep re-counting until the correct, desired result is reached.

Republicans know they have to win by more than the margin of cheating. In Florida they didn’t.

Can’t remember where I heard it but I like DMoF pronounced (Dee-Moff) which stands for Democrat Margin of Fraud.

I disagree. Remember, in 2008 Coleman beat Franken by 215 votes. In the end Franken won by something like 312 votes. Probably due to felons illegally voting; well over that number, but short of 400, felons voted state wide.

The order from the state judge is now moot, because the case has been moved to federal court.

But the judge it is assigned to is an Obumbles appointee who likes ruling against republicans.

Next step – appeal to SCOTUS. When those justices call a halt to the ever-changing deadlines and Scott and DeSantis eke out wins the Lefties will chant “elected not elected” just like in 2000.

Here in GA, we have an obama appointee that just told the GA election board that they could NOT certify anyone until Friday. Voting laws are getting to be like NFL contracts, if you don’t like the one you signed then break it and sign another.