Judge’s ruling on a lawsuit ended up as a win for both candidates.

You think it’s chaos in Florida, but have you looked at the Georgia governor race? If Republican Brian Kemp defeats Democrat Stacey Abrams, you can expect a war.

All of this has come to light after a judge ruled on an Abram’s lawsuit that favors both candidates, which caused both campaign’s to yell victory.

Brown stated at the National Action Conference that Abrams will only lose if the Republicans stole the election:

Democrats beyond Georgia have started to echo the notion that a Kemp victory would be illegitimate. Ohio Sen. Sherrod Brown said Wednesday that if Abrams loses it’s because Republicans stole the election.

“If Stacey Abrams doesn’t win in Georgia, they stole it. I say that publicly, it’s clear,” Brown said during a briefing for the National Action Network.

“I know Stacey [Abrams] well – she was one of my really strong surrogates in the campaign. If she’d had a fair election, she already would have won,” Clinton said while receiving the Arena Award from the LBJ School of Public Affairs in Austin, Texas.

At Yahoo! Finance’s All Markets Summit, Booker made similar claims:

“There should be a federal investigation. The Justice Department should be investigating that election to make sure it was fair and the decisions that were made were not to politically advantage someone but to protect voters and the voting process,” Booker said.

Booker, who was not up for reelection this year but is a potential presidential candidate in 2020, noted that he was commenting “from a perspective where I have not been in the weeds,” but he said, based on what he’s seen, he is convinced that Abrams isn’t getting a fair shot.

“I think that Stacey Abrams’s election is being stolen from her, using what I think are insidious measures to disenfranchise certain groups of people,” said Booker.

Democrats have cried over voter fraud since the beginning since Kemp served as Georgia’s secretary of state (he has since resigned his post). They didn’t approve of the “purge of inactive voters that took more than a million people off the rolls” or when Kemp implemented a law “that held up more than 50,000 voter applications — most of them from minority applicants — because information on them didn’t exactly match state records.”

To Democrats, it is voter suppression. At The Washington Post, Aaron Blake rolls his eyes at the notion:

But they could merely argue that the courts need to intervene or that Kemp’s apparent win would have a cloud hanging over it; instead, they are declaring it invalid. Practically speaking, they are alleging illegal activity that hasn’t been proven — and seems unlikely to be.

A similar purge of the voter rolls in Ohio was upheld by the Supreme Court earlier this year. And in holding up those voter applications, Kemp was invoking an actual “exact match” law that was passed in 2017. Democrats are making a passionate case that these actions were targeted at minorities — and the data bear out that minorities bore the brunt of them — but saying the election was “stolen” carries very specific, legal connotations.

However you feel about the underlying issues, saying the election is being stolen skips over all of that and can’t help but undermine confidence in American elections. Democrats might say it deserves to be undermined, given Kemp’s conduct, but it’s a very serious accusation that has implications for our entire political and legal system. If leaders of both parties are alleging this kind of thing is possible in huge races in neighboring states and implying that legal remedies are insufficient to stop it, that’s a recipe for widespread mistrust of elections.

REALLY? RealClearPolitics has Kemp with a +3.0 average. 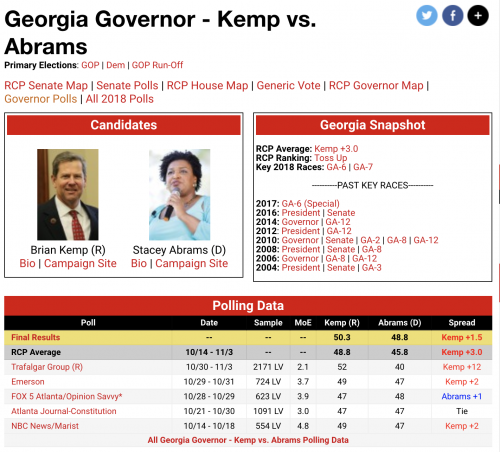 A few hundred more votes just came in and the margin in the race for governor remains the same. @staceyabrams still needs to net 20k+ votes to force a runoff. We should get provisional ballots from DeKalb & Gwinnett later today – two heavily D counties. #gapol pic.twitter.com/6A5u5OD1VR

Democrat Stacey Abrams and Republican Brian Kemp both celebrated a victory yesterday evening after a federal judge ruled on a lawsuit that benefits both candidates. From USA Today:

While U.S. District Judge Steve Jones sided with the Stacey Abrams’ campaign, ordering that the secretary of state’s office must not certify election results without confirming each county’s vote tally includes absentee ballots on which the voter’s date of birth is missing or incorrect, he ruled against them on two other points.

The judge will not require counties to accept absentee ballots with incorrect addresses or provisional ballots cast by people who tried to vote in the wrong county, prompting Brian Kemp’s campaign to again claim victory.

Both candidates used the decision to celebrate and attack the other:

“Tonight, ‏Judge Jones rejected efforts by Stacey Abrams and her radical allies to undermine the democratic process and rule of law in Georgia,” said Kemp’s communications director, Ryan Mahoney. “He denied her requests to create new voters and slammed the door on attempts to count illegal votes.

“This ruling solidifies Brian Kemp’s insurmountable lead. The election is over and Kemp is the Governor-elect. It’s time for Abrams to concede and join our efforts to keep Georgia moving in the right direction.”

“This is a major victory for Georgia voters and the Abrams campaign in the fight to ensure every eligible vote is counted and every voice is heard,” said Lauren Groh-Wargo, Abrams’ campaign manager. “Under Brian Kemp’s watch as the nation’s foremost architect of voter suppression, countless Georgians have had substantial roadblocks placed in their path as they sought to exercise their fundamental right to vote.

“Now, the courts are doing what Brian Kemp’s Secretary of State office refused to – upholding and protecting Georgia’s rights and underlining the need for free and fair elections in a state that has suffered from an acute assault on voting rights engineered by none other than Secretary of State Brian Kemp.”

Kemp’s campaign, which has repeatedly called on Abrams to concede, repeated that call Wednesday, saying Abrams and her supporters have used “fake vote totals,” “desperate press conferences” and “dangerous lawsuits” to try to steal the election.

“After all of the theatrics, the math remains the same,” Kemp campaign spokesman Cody Hall said in an email. “Abrams lost and Brian Kemp won. This election is over.”

this cold civil war will be the death of America as founded.

Or at least the left half of America, if they keep pushing it.

I believe the left intend to push things toward all out Civil War. They know it is nearly impossible to change the government forms without massive violence, and they are showing they are very willing to do so.

That is why they do these things, and if they claim the Republicans “steal” an election, what they are really meaning is that the Democrats failed to steal it, so just like in corporate America, if you set a goal of 30% profit and only attain 25% profit, you lost money. It is the same with these criminal leftists.

Why do we have to wait for them to fire the first shot?

We are going to be blamed for starting it anyway.

Gee, accuse the (R)s of doing what the (D) actually do and the (R)s actually don’t? All of a sudden, the (R) party, which has been steamrolled by the (D) party on basically everything for decades because it’s so goody two-shoes, is now the party of power-grab desperation?

Everything leftists touch they ruin. Now, they are trying to undermine elections harder than ever.

I have had a strong dislike toward the (D) party, but in recent years it has turned into a white-hot hatred. They are blatantly tyrannical.

Why does the presumption always seem to be that the purged voters would have voted D? Doesn’t every voter have a choice to vote D or R?

D or R or didn’t vote. In wbich case we know they would have voted D if they had voted. See?

You would normally be correct in that when a given mixed pool is reduced by an amount, all contents of that pool should be reduced in an equal ratio BUT in this case (voter rolls), the purge would remove illegal voters and dead voters, two groups that overwhelmingly vote democrat. So, the DNC screams to stop it.

Horrible and beyond the pale and in service of Mother Russia when Trump does it. Responsible political behavior when Democrats do it?

I want to take Democratic politicians seriously again, but I can’t as long as they treat this like a children’s game.

Isn’t there some responsibility as a voter to obey the rules? What is the point of a state legislature making laws to cover the elections and then have a judge overrule them? There are supposed to be three legs of our governmental stool but the judicial branch is rapidly encroaching on the other two.

Ding. Ding! DING! We have a winnah. Say loud, say it proud.

1) Their tactics work, even partially, or occasionally;
2) State law around elections are treated as infinitely malleable by the judiciary;
3) Few, if any, are punished for provable and obvious fraud;

Why should they stop?

BINGO. I commented on another well known blog that when the dust settles from all these dirty tricks, no one will be held to account, or punished, and the entire game plan will be repeated in 2020.

I originally dismissed it, but I’m starting to think Trump was on to something when he said there were millions of fraudulent votes in 2016…

Of late Democrats always scream Stolen Election. They are always outraged and in a state of high dudgeon.

But you know what really makes Democrats crazy with rage? – Donald J. Trump

I would also point out that there will be no run-off … in GA a run-off only occurs if the winning candidate doesn’t have 50% + 1 vote.

Abrams can only win or lose.

That is gonna be a BIG butt hurt.

The claim of voter supression is empty. 50,000 registraions are “pending”. To clear it up, you show your ID at the polling place. Guess what, GA has a voter ID law, so everyone must show ID to vote.

If you dont wand to be purged, go vote or respond to the card mailed to you.

The Dem’s are still flooding the public with robo calls, TV commercials, and mail fliers spouting mis-information and wanting everybody to confirm their vote counted.

My question is where did all of this money for this come from?
Hint: not from anywhere in GA

Pure projection. They know if Abrams wins it’s because the Ds stole the election.

It’s truly disturbing to see how Chicago machine tactics have been disseminated throughout the nation.