Scott urges Floridians to “come together for the good of our state and our country.” 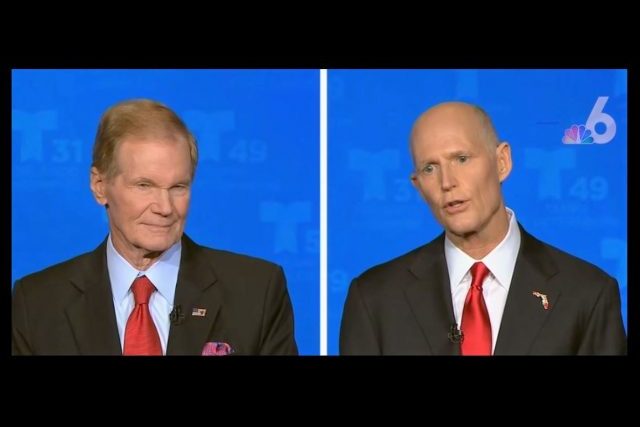 Senator Bill Nelson (D-FL) has conceded to Florida Governor Rick Scott (R).  Scott will become Florida’s junior senator, making this the first time in over a century that Florida has had two Republican senators.  This flipped Senate seat will also strengthen the Republican majority in the Senate to 52-48.  Prior to the midterms, the GOP held a slightly slimmer majority of 51-49.

Scott announced that Nelson, who has held public office since 1972, conceded in a phone call Sunday after the second mandatory recount showed Scott leading by approximately 10,000 votes.

Scott was leading Nelson by 10,000 votes in the race to become the next U.S. senator to represent Florida, official results showed Sunday.

Nelson, who served three terms in the U.S. Senate, met his match in Gov. Rick Scott. The victory will be Scott’s third close statewide win in less than a decade.

The apparent victory also marks the first time in more than a century that the Sunshine State has two Republican senators representing them in Washington. The state is scheduled to certify results in the race on Nov. 20.

It’s unclear what Nelson’s plans will be post-race. The 76-year-old was first elected to office in a state House district near Cape Canaveral in 1972. He’s served three terms in the Florida House, six terms in Congress and was Florida’s insurance commissioner after Hurricane Andrew swept the Miami area.

Scott’s announcement of Nelson’s concession included his desire to put the race behind us and to “come together for the good of our state and our country.”

Gov. Rick Scott declared victory in the U.S. Senate race over incumbent Democrat Bill Nelson on Sunday after a hand recount showed him with a 10,033-vote lead.

In a statement, Scott said Nelson called to concede the race. Nelson is expected to give a statement at 3 p.m. Sunday.

“I just spoke with Senator Bill Nelson, who graciously conceded, and I thanked him for his years of public service,” Scott said. “Now the campaign truly is behind us, and that’s where we need to leave it. We must do what Americans have always done: come together for the good of our state and our country.”

An hour or so after Scott’s announcement, Nelson confirmed his concession in a statement Sunday.

“Well, things worked out a little differently than Grace and I had hoped. But let me say, I by no measure feel defeated.

“And that’s because I have had the privilege of serving the people of Florida and our country for most of my life.

“And I don’t think anyone could have been as blessed. It has been a rewarding journey as well as a very humbling experience.

“I was not victorious in this race but I still wish to strongly re-affirm the cause for which we fought: A public office is a public trust.

“First, I want to say thanks to all of you who rallied to our cause, you walked the precincts, knocked on the doors, made phone calls, and contributed your time and your resources.

“And with an optimistic heart, I wish to say something else: We may have been heavily outspent in this campaign, but we were never outworked.

“To all Floridians, whether you voted for me, or for my opponent, or you didn’t vote at all, I ask that you to never give up this fight.

“You must fight to protect the fundamental right to health care and against any attempt to rollback our progress on things like pre-existing conditions.

“You must fight to preserve the natural wonders of this state, from the Everglades to the Pine Forests to the beaches and offshore waters.

“Say ‘no’ to drilling – not one rig off our coastline.

“As a country, we need to continue to launch rockets and explore the heavens.

“I have seen the blue brilliance of the earth from the edge of the heavens. And I will fight on to save this planet, our homes and our cities, from the spreading plague of the greenhouse gases that infect our atmosphere, and play havoc with our weather, and risks the planet our children and grandchildren will inherit.

“Every single one of us needs to keep fighting to strengthen Social Security and Medicare, for the generations that are there and to come. It’s your Medicare, it’s your Social Security; you pay into those programs. They belong to you, and not to the politicians who are plotting to rob your retirement.

“I will continue to fight on and on for the inalienable human rights that are the soul and glory of the American experiment: civil rights, women’s rights, LGBT rights, and the sacred right to vote.

“We must end all forms of voter suppression, make it easier for Americans to vote, and honor the ideal that we are governed by the majority and not by the minority rule.

“There are great decisions ahead that will shape the course and character of America in the 21st century.

“And yes, I will continue to fight hard for what’s right, and I will also encourage others to seek common ground with their colleagues on the other side of the aisle.

“Inevitably, at times, that effort will fall short. But we have to try. We have to move beyond a politics that aims not just to defeat but to destroy; where truth is treated as disposable, where falsehoods abound, and the free press is assaulted as the ‘enemy of the people.’

“There’s been a gathering darkness in our politics in recent years. My hope today can be found in the words of John F. Kennedy, who said civility can guide us through that darkness to a safe and sane future.

“Thank you, all. God bless you, and God bless our country.’’

I live in Florida and volunteered for 3 manual recounts. What frightens me more than the fraud which I say is there, in reviewing hundreds of ballots the voters who voted do not follow any type of rhyme or reason. There truly is no way to understand how many of these voters make a determination on who they vote for (if they don’t skip) and why. Just baffling and frightening.

Saying that, congratulations to our next senator Richard Lynn Scott.

Beating Bill Nelson is no small feat. He’s a lousy senator but a world-class candidate, brilliant at getting elected. He’s like a sore tooth in Florida, you’re never rid of him.

Fuzzy wrote: “This flipped Senate seat will also strengthen the Republican majority in the Senate to 53-47. Prior to the midterms, the GOP held a slightly slimmer majority of 51-49.”

Yikes, right you are! I was making the mistake of already counting Mississippi, which is by no means in the bag (except apparently in my head, heh). Thanks, I’ll fix this.

??? North Dakota also flipped. If Mississippi stays Republican, it will be 53-47.

Mississippi is in the bag. The 16.5% who voted for true conservative McDaniel are certainly not going to vote for Espy now.

I got elected to my state legislature in 1972. It really resonated with me, as a Florida voter now, how significant it was that Bill Nelson was on the government teat / dole for 46 years. In that time I had a full career, affected many lives positively in sales, marketing, training, management, etc, and helped the companies I worked for be profitable, some very, very profitable. On the other hand, Nelson did nothing while posing as a “moderate” but voting with the evil Harry Reid and the beyond evil Chuck U. Schumer 99% of the time. Good riddance to Nelson because we know Rick Scott will “get to work”. Congratulations Senator Scott!

Whaddya’ mean Nelson did nothing? He got a “free” ride on the Space Shuttle Columbia in 1986. /sarc

“to “come together for the good of our state and our country.”

Given the war on our Republic by the left, what a platitude.

Jules is right and I was wrong! North Dakota too makes four gains. Fuzzy was right in the first place! 53 to 47,assuming Mississippi doesn’t change, which it won’t.

Must be using “Fuzzy” math

As a Floridian, I couldn’t be happier with this result and DeSantis’s win.

I think Nelson gave in because more voting fraud would be discovered.

Now how to deal with 1.5 million new “felony” voters that are predominantly black and Latino?

Sessions will get right on it.

Sessions? Try to keep up.

I wonder if Snipes ever finds those 2,000 ballots that are “in the building somewhere” if Scott’s lead will go back to 12,000?

Hope Scott buys a few rounds for Rubio among others who fought the steal.

He was well over 13K when Miami-Dade refused to count. The State should do an immediate audit. These counties got away with destroying the ballots before with zero consequences.

The Scott lead was far higher and growing, hence the early call on the counting by several counties. The massive frauds were being uncovered: captured voting machines being fed ballots (ala Bush-Gore), provisional and absentee ballots manufactured by organized teams, GOP registered absentee ballots rejected or even destroyed, etc.
Remind anyone of the MI recount fiasco in Detroit when they found 3/4 of the ballot boxes did not contain nearly the ballots on the tally sheet seal? What happened to the obvious criminals in charge of that election….not a thing.
Sessions being clueless and useless again.

Sessions being clueless and useless again.?

Well instead of complaining about Sessions, why not call this number and complain instead. Do something about it. This has zero to do with Sessions and everything to do with you taking action.

If your state has a TrueTheVote or equivalent, join it.

53-47 is a hell of a lot better than 52-48 simply because a 52-48 split means someone like that idiot from Utah gets to carry on the traditions of Flake and McCain and those other Republican Democrats for the next 6 years!

a 53-47 split would offer insulation from the effects of the Utah Cuck!

We are finally rid of two POS but i am sure there are others just as bad standing in line to embarrass the state with their antics.