Robert Flanders: “how embarrassing for Rhode Island to have a man in the U.S. Senate who would take a judicial candidate through flatulence entries, ‘ralphing’ throwing up, the f-word.” 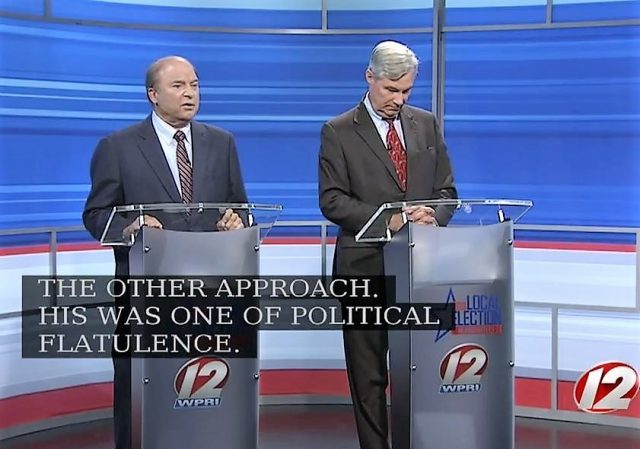 Kavanaugh pushed back, explaining that the term “boofing” meant flatulence, “ralphing” was vomiting, and “Devil’s Triangle” was a drinking game. Whitehouse refused to accept Kavanaugh’s testimony, even though high school classmates backed up Kavanaugh.

The issue came up during a televised debate tonight on WPRI 12 in Rhode Island.

Flanders accused Whitehouse of “political flatulence” in his obsession with the yearbook, and of character assassination against Kavanaugh: 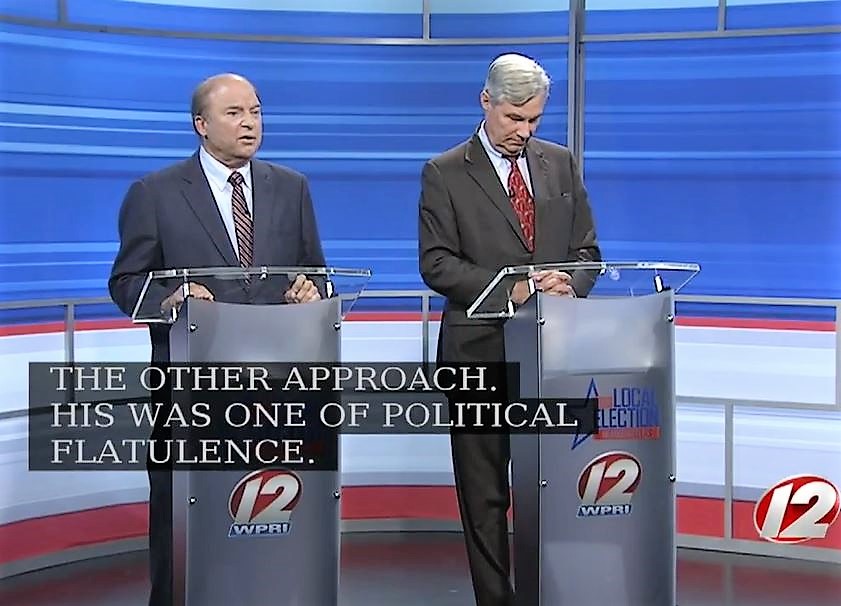 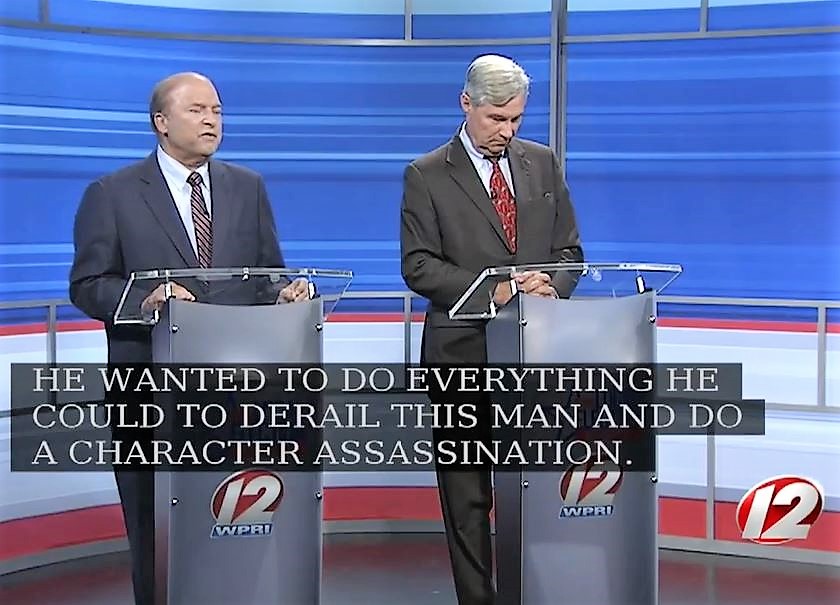 Whitehouse stood his ground, claiming that the yearbook entry questioning helped “give a window into the credibility of the candidate for the court.” 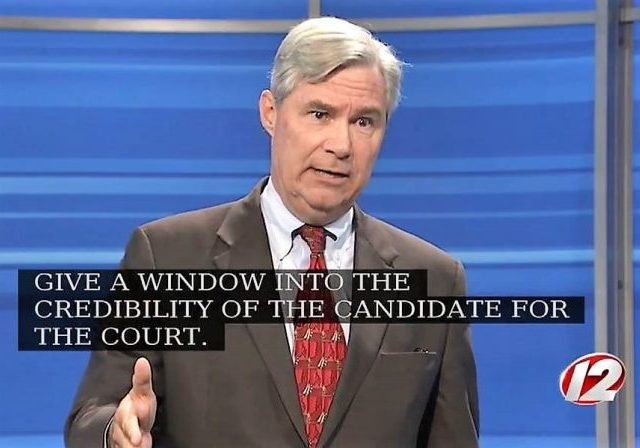 Flanders: … unfortunately, my opponent took the other approach, his approach was one of political flatulence. He wanted to do everything he could to derail this man and to do character assassination. I think he owes an apology to Judge Kavanaugh and his family, and in fact even to his Senate committee, for the way he handled things ….

Whitehouse: … we have to work through unpleasant or difficult evidence, and I am very confident that this helped “give a window into the credibility of the candidate for the court….

Flanders: … Absolutely not, what did this questioning show about the allegations that were at issue? Nothing. There was really, as he said, sophomoric rhetoric that appears in many a yearbook. And to take his five minutes to go through a yearbook cross-examination which absolutely turned up nothing, except embarrassment for him and the committee. And this isn’t just me alone.

The nation has been ignited by this cross-examination into thinking, oh my goodness, how embarrassing for Rhode Island to have a man in the U.S. Senate who would take a judicial candidate through flatulence entries, ‘ralphing’ throwing up, the f-word. I mean, really, is that what the Senate is about?

That shows how Whitehouse still doesn’t realize how his own credibility has been hurt. There are indications the ‘boofing’ debacle has hurt Whitehouse, and he is vulnerable.

The full debate is here.

What a pompous self-important unself-aware asshat. He beclowned himself and his State

Kavanaugh: I am happy to discuss how a 16 year thinks.

Whitehouse is an arrogant, condescending prick that is just an idiot.

And since it’s Rhode Island it doesn’t matter. He’s going to win by 15 points anyway.

Boof was a character in the movie Teen Wolf.

I posted that because if Boof had been commonly understood to be an extremely vulgar word, it would not have made it to the movie.

Whitehouse’s questioning of Kavanaugh reeked of arrogance and condescension. Maybe an election defeat will give him a little much needed humility.

I’m sorry but I think Whitehouse is only one of about five Dems who are too stupid to be on a Senate Committee. Think of the bright light from Hawaii! My God! is there anyone on Earth dumber than that woman? Well, maybe Shelia Jackson Lee but then we have Blumenthal, one of the most ethically challenged members of the Senate, challenging Kavanaugh with the meme of “Lie once, lie all the time”. Then there is Spark Booker who has no intellect and his black twin Harris who is without any class or intelligence. Of course, there is the intrepid Feinstein who is as trustworthy as a rattlesnake. So, all in all, Whitehouse is in good company and one has to ask, did their constituents watch them in action?

No. There is no one else as stupid as Crazie Mazie among the Asian office holders. She is an imbecile and always has been. Like Sheila Jackson Lee, the black imbecile title holder, Whitehouse clings to his status as the moron of the Senate.

If I may respectfully disagree, although Hank Johnson (D-GA) hasn’t been vocal recently, his concern for Guam will go down in history as the most moronic statement to ever pass through the lips of a Congressperson!

While I agree with you that Rep. Johnson is a high quality candidate for “Congressional Idiot of the Year,” the post was restricted to SENATORIAL idiots. Good gracious, if we were to expand the contest to the whole Congress, we would have a terrible time trying to pick a winner!

Maxine Waters wants to be a contendah.

When I saw “There is no one else as stupid as Crazie Mazie”, the very first thing I thought of was Maxine Waters.

Don’t forget Willie Brown’s blow up doll, Kamala Harris. Most of the air is in her head.

What? You don’t include Patty Murray in that roundup? The number of times her handlers have had to tell her: “No! The OTHER Washington, Patty” and point her eastward are too many to count!

A possible explanation of the elections of Whitehouse and Stolen Valor Blumenthal does exist – the proximity of the state populations provides ample opportunity for incestuous Socialist-Democrat breeding.

Or maybe it’s the water.

“Boner”, as recently as the 80s, did not have the meaning it does today. Growing Pains had a character named “Boner”. Comic books in the 50s often had the word “boner” used as “a mistake”

I’m going to feel like Sheldon Whitehouse after typing this but…..sorry to pop your bubble but you’re 1/2 right. Yes “boner” meant a mistake but it also was slang for an erection long before the 80s. I graduated HS in 1978 and boner had that meaning all through my school years and in fact my Dad – class of 1957 – had a classmate that was known his entire life by EVERYONE as “Boney”. And no he didn’t get that moniker because he was slim.

…lol….had to go google the name – from his sister’s obituary… “She was preceded in death by her husband, Albert XXXXX on December 7, XXXX; siblings, Alvin XXXXX, Beatrice XXXXX, Myrtle XXXXX, Thelma XXXXX and Delton “Boney” XXXXX.”

Had they printed “Delton” no one would have known who they were talking about.

It had the same two meanings (one popular slang mostly used by youngsters)when I entered HS with Dwight David Eisenhower as President.

As someone who grew up in the 80’s I can assure you that the word boner meant exactly what we all think it means. 😉

Yeah it might mean a mistake but more often than not when you said boner you were talking about the other thing. While giggling as a kid. 😀

Graduated HS in ’68 in Southern California.

“Woodie” referred to a paneled station wagon often seen on farms and also much beloved by surfers.

It was also used to refer to the “other thing” and not only by surfers! (If ya know wuddai mean…)

Sheldon is one of the very few persons who can make Patrick Kennedy seem like an intellectual, with knowledge worth sharing.

I thought the line where he compared himself to a prosecutor was telling. Not only did it put the lie to “this was a job interview”, but it also revealed that he considered his main job to be convincing people that Kavanaugh was guilty.

Oh to witness a one-on-one between Whitehouse and TV’s Walter Bishop:

Walter: (After making Astrid smell road kill) “I went beaver hunting in eastern Canada in the 70s. Of course in those days beaver hunting meant something else entirely”

Eventually, we discovered that while we though we were beaver hunting, it turned out the beaver was hunting us, and the beaver made us pay for the rest of our lives.

Whitehouse, Yearbook Decoder, is one of the class of absolutely moronic, stupid, ignorant Senators that are characteristic of New England. These seemingly retarded individuals are the progeny of rich, old families that have allowed the passage of money to degenerate their respective gene lines until they have put before us spoiled dunces, pompous beyond reckoning.

I’m H.S. class of ’61—Boner meant erection (as well as mistake). Ralphing was vomiting–later aka “spewing” or “blowing chunks”.

And Whitehouse was Senator “Doofus” now known as Senator Boofus.

He is a silly tool.

DemoCraps proved they are an embarrassment to OUR Nation ,,, Remember this when you vote in November !!!

Is it fair that a tiny state like RI & PP gets the same number of U.S. Senators as Texas?

That argument only applies to red states that get the same number of senators as New York and California.

The whole argument on “2 Senators” is ridiculous. This country is NOT a Democracy. That is left open to occur at the State level. The country is a REPUBLIC.
Besides, the argument that I would have 10X DiFis and Harrises and maybe 4X Gillibrands and Schumers there in the Senate is a good one for the status quo.

It’s as instituted by the original framers and it makes good sense when you consider the check and balance of the House of Reps, which is not based on state borders but on population and districts.

Is it fair that the vote made by the uninformed, possibly mentally “challenged”, drugged-up citizen weighted precisely the same as yours?
Nothing in this life is completely fair but this is the best we’ve got so far.
Buck up.

What STATE is PP?

It isn’t just “fair”, it was necessary for the formation of the Constitution.

Remember, it was, at the time of its drafting, just another experiment in ‘forming a more perfect union” between a clutch of sovereign states. And those sovereign states were quite jealous of their own power and prerogatives. They had just seen that the Confederation was not working very well.

No comparatively small state was going to throw in on this new experiment with a central government without assuring that it retained its interests against states like Virginia.

It was a brilliant notion at the time, and it remains so today.

That was one of the provisions to encourage the small states to sign on to a relatively strong federal government. Even so, the smallest—RI—was the last to ratify the new Constitution.

In those days everyone was wary of being overwhelmed and dominated by Virginia.

Oops, already been pointed out. Looks like I’m a half-hour or so behind the times.

Tiny Delaware was the first to ratify.

My great-great grandfather has several paragraphs devoted to him in the book “The History of Rhode Island”. He moved out of there to MI and then to OH. Obviously the man was improving himself.

“…flatulence entries, ‘ralphing’ throwing up, the f-word. I mean, really, is that what the Senate is about?”

Well, it must smell real bad in RI – latest polling has Sheldon rising in to a new lead of 24 points.

The conservatives obviously didn’t have a dynamic woman to take on this????