One staffer agreed that Tennessee voters are “ignorant.” 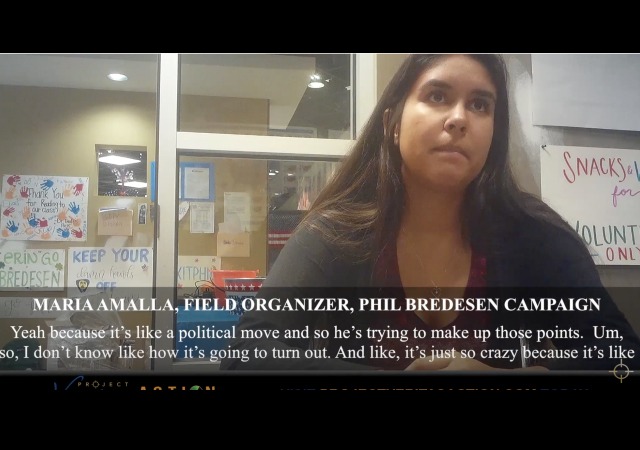 One staffer agreed that Tennessee voters are ignorant.

On Wednesday, I blogged about how Blackburn has an 18 point lead on Bredesen according to The New York Times Upshot site and a CBS poll has her up by 8 points.

It’d make sense for Bredesen to say he would have voted for Kavanaugh because the judge’s confirmation was a priority for Tennesseans. A poll found that 47% of the people wanted Kavanaugh confirmed and 30% opposed him. That same poll saw 44% of the respondents say “their vote would be in support of President Donald Trump, while only 26 percent said it would be in opposition of him.” 30% of the respondents said Trump will have no bearing on their vote.

Maria Amalla and Will Stewart, staffers for Bredesen’s campaign, told the undercover Project Veritas journalist that the candidate used Kavanaugh:

JOURNALIST: “Like he wouldn’t really vote yes [for Kavanaugh,] would he?

AMALLA: “No, it’s a political move… He thinks that like we’re down like half a point right now. It’s like really close and we’re losing by a point or two. So he thinks that if like by saying this he’s appealing to more moderate republicans and he’ll get more of them to vote for us.”

JOURNALIST: “I was so confused because I just can’t believe he would actually vote [for Kavanaugh.]

STEWART: “He wouldn’t. But he’s saying he would… Which I don’t know if it makes it worse or better. No, it makes it better… “

Amalla confirmed the journalist’s thoughts that Bredesen would only say that to bring in moderate and Republican voters:

When asked to clarify that Bredesen is only saying he’d vote for Kavanaugh to “get the Republican vote,” Amalla, a field organizer for Bredesen’s campaign, affirmed, “Yes.” Amalla reiterated, “[Bredesen] thought that like by coming out in support [of Justice Kavanaugh] that it would get more republicans on his side. He wasn’t doing as well in the rural parts.”

The journalist told James Miller, voter protection for the campaign, that he didn’t like that Bredesen had to lie to get voters. Miller agreed, but said that’s the way things are and it’s reality.

Delaney Brown, a field organizer, told the journalist she’s “going to be pissed if this doesn’t pay off.” She continued:

Brown: If we lose, I’m going to be so mad. Because not only did he forfeit a lot of moral high ground…

Journalist: A lot of what?

Brown: If it’s by a small margin…

Brown: That’s the base.

Not only that, but Stewart thinks Tennessee voters are “ignorant”:

JOURNALIST: “So he’ll lose voters if he says yes [to not confirming Kavanaugh?]”

JOURNALIST: “Are the people of Tennessee that ignorant?”

In order to keep the moderate vote, along with some Republicans, the campaign has to hide Bredesen’s affiliations with the National Democrat Party.

The journalist brought up Trump to Stewart, who said that they’re not technically allowed to talk about the supposed “blue wave” that’s coming to DC or that Bredesen is running against Trump. However, Stewart said “that’s all why we’re here,” but they “can’t put it out there.” He also confirmed that Bredesen hates Trump.

This point came up in another conversation with Stewart and his colleague Drew Marshall:

MARSHALL: “We would scare all the people who would vote for Phil Bredesen, but not [Senate Democratic Leader] Chuck Schumer.”

STEWART: “Yeah, exactly, because there’s a lot of republicans who are going to vote for [Bredesen…]”

STEWART: “Yeah. And that’s how they’re messaging against us… that he’s gonna be a ‘toe the line’ democrat voter… Because there are people who loved him as Governor but won’t vote for a democrat for national office.”

Stewart and Miller both agreed that once Bredesen gets elected (if he does) “he’ll be a good Democrat.”

In other words, a politician is saying and doing all he can to get anyone to vote for him.

Was there ever any doubt?

Kudos to O’Keefe for getting this on tape.

Actually, the majority of voters are ignorant, it’s just politically incorrect to point it out. This is why campaign ad blitzes work and why we have an 85% incumbency re-election rate despite Congress having abysmally low approval ratings.

Buy a bunch of ads smearing another candidate, and most voters will come away with a negative perception of them. That’s not what I would call being independent-minded.

The first rule of Lie Club: don’t talk about Lie Club, even when you’re at Lie Club.

JOURNALIST: “Are the people of Tennessee that ignorant?”

Awwww, Taylor Swift is going to be so hurt when she finds out that her favored candidate thinks she’s a dumb-ass.

Politicians have been lying through their teeth, to gain political office, ever since the Senators campaigned from the steps of the Senate in ancient Rome. If people actually believe what they say, then they are, unquestionably, ignorant, if not down right stupid. There is even a stale old joke about this:

“How do you tell if a politician is lying? His lips are moving”.

While this is a Democrat, lying to ones constituents is not limited to Dems. We are still waiting for the Republicans to repeal Obamacare and do a lot of other things that they promised to do. This is hardly an epiphanal moment.

Blissfully ignorant or optimistically naive? Many… most people start with a presumption of action and expression in good faith.

put this on auto-play until the election

JOURNALIST: “Are the people of Tennessee that ignorant?”
STEWART: “Yeah, because our friends in the media will make sure they never see this video.”

They had just one job … don’t act crazy