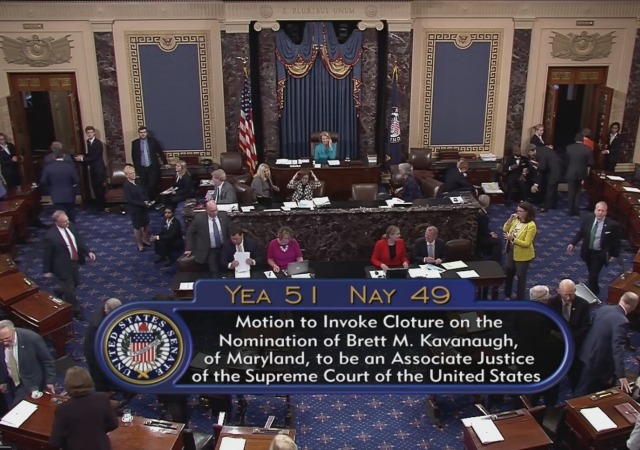 The Senate voted 51-49 to invoke cloture, which limits the debate on Supreme Court nominee Judge Brett Kavanaugh to 30 hours. This sets up a final confirmation vote on Saturday afternoon.

FINAL VOTE: If all 30 hours of post-cloture debate time is used on Kavanaugh nomination, his confirmation vote would be held Saturday at 4:52pm.

It’s important to remember that the Senate doesn’t always use the 30 hours they’re given. It could happen earlier.

The cloture vote comes a day after the Senate reviewed the FBI report on Kavanaugh, the seventh background investigation on him. Senate Judiciary Committee Chairman Chuck Grassley said that the report showed no misconduct and nothing that we didn’t already know. Of course the Democrats criticized the report and Sen. Dianne Feinstein (D-CA) claimed that it looked like “a product of an incomplete investigation” probably at the hands of the White House.

We are keeping an eye on all four of those senators. None of them have indicated how they will vote when the confirmation comes to the floor. Collins said she will announce at 3PM ET.

Sen. Susan Collins will vote yes on the procedural vote this morning, but won’t announce her final vote on the nomination until 3pm this afternoon, @DanaBashCNN and @mkraju report

Sen. Steve Daines (R-MT) has to walk his daughter down the aisle on Saturday, but “said he would return to cast the decisive vote if needed.”

Reporters asked Flake yesterday how he will vote. He evaded the question, but gave hope for the Republicans. From The Wall Street Journal:

Asked whether he now had enough information to confirm Judge Kavanaugh, Mr. Flake—who last week was prepared to vote for the nominee—suggested the report contained no new evidence supporting the sexual-misconduct allegations.

Republicans only have a 51-49 majority in the Senate so they can only afford one defection. If that happens, Vice President Mike Pence will cast his vote to break the tie.

Any senator holding out his/her vote is doing it to see what monetary offer they could get. The swamp really needs to be cleaned!

notamemberofanyorganizedpolicital in reply to texasron. | October 5, 2018 at 2:51 pm

Sadly afraid you are right.
.
.

Did some one say AZ senator FAKE?

Would anyone be shocked to learn that one or all of these four “pivotal” Senators are shopping their vote for leverage (money, side deals, campaign assistance, etc.) to vote Yes on Kavanaugh? I recall, although I might be wrong, Murkowski did this sort of thing during the Gorsuch confirmation process with a request for the opening up of Anwar for exploration.

Weddings are scheduled months in advance. McConnell had to have known that and scheduled the vote during Daines’ absence anyway. Allowing any two of the traitorous four to spike the vote looks a lot like a planned failure.