Pete Stauber has a 15 point lead over his Democrat opponent. 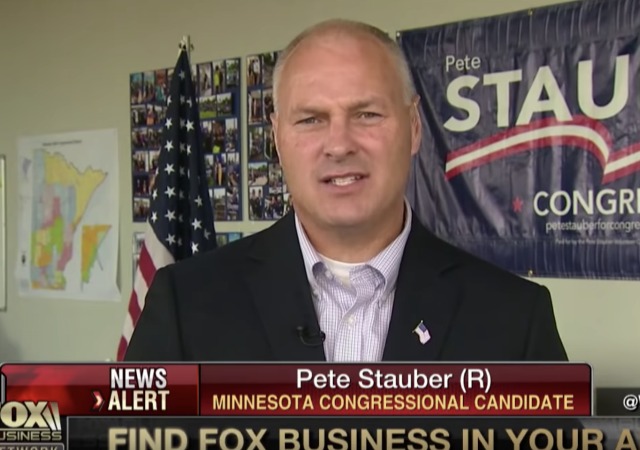 The Democrats need to hold all their seats and win 23 seats in order to have control of the House of Representatives.

It looks like they’re going to lose a seat in Minnesota’s 8th District, which is a heavy Democrat district. The Democratic Congressional Campaign Committee (DCCC) decided to pull $1 million in funding to support Democrat candidate Joe Radinovich since his Republican opponent Pete Stauber has a 15 point lead!

The Democrats originally poured $1.4 million into the race to defend the seat after Rep. Rick Nolan decided to join the gubernatorial ticket in June. Republicans have also shuttled money and support to the district in order to flip it. From The Washington Free Beacon:

Republican-aligned groups have flooded the district eager to flip a seat as Democrats campaign to retake control of the House of Representatives. The Congressional Leadership Fund (CLF), a super PAC supporting the GOP majority, began amassing on the ground in the 8th district just days after the Aug. 15 primary and began launching district-wide advertisements highlighting Radinovich’s unpaid parking tickets and other legal transgressions by Aug. 18. The group said the ads, which preceded DCCC-backed ads by nearly a month, helped to reverse Stauber’s early deficit.

“The goal was to [go in] early into Minnesota’s 8th, disqualify the Democratic candidate, deploy an aggressive field operation, and educate voters, give the voters a choice,” CLF spokesman Courtney Alexander told the Washington Free Beacon. “I think that’s a real indicator of why Democrats had to make the decision to leave.”

Stauber’s campaign claimed that Radinovich “had failed to reflect the interests of northern Minnesota throughout the race.” This is why they’re flocking to Stauber:

Stauber has focused his campaign on local issues, particularly on the Duluth region’s mining economy, while also highlighting his willingness to buck GOP trends. The former law enforcement union leader has said he would not back right-to-work legislation, which ends mandatory fair share fees. The Stauber campaign has attracted support from beyond Donald Trump’s base, which overwhelmingly supported the president in 2016 even as it sent Nolan to Congress, earning the endorsement of the Duluth News Tribune.

The 8th District is “union-heavy and mostly white working-class” people. President Barack Obama won the district in 2012 by six points, but President Donald Trump took it in 2016 by 16 points. The New York Times stated that “[N]o battleground district swung more from Barack Obama to Donald Trump” and this is one of the “best pick-up opportunities” for the Republicans.

A New York Times/Sienna College Poll from early September had Radinovich with a one point lead, but within just a few weeks, the same poll has Stauber up by 15 points, 49-34.

Stauber, a St. Louis County commissioner and former Duluth police officer running as an ally of President Donald Trump, had clear advantages across the demographic and geographic blocs that make up this district, a swath of northeastern Minnesota that includes Duluth, the Brainerd lakes area, the Iron Range, and the northern Twin Cities exurbs.

Per the poll, Stauber had nine-point leads among female voters and voters over 65, a 10-point lead with independents, and a nine-point lead among voters on the Iron Range, the string of mining communities that have been the heart of this longtime DFL stronghold.

Cohn admitted that the huge shift may not be entirely real, “[B]ut there’s probably more truth to it than a lot of Democrats criticizing the poll want to admit.”

Cohn outlined reasons for a “phantom shift,” but reminded the haters of the reasons why the shift has credibility:

One factor is that we are now naming third-party candidates in the final stretch, and the Independence candidate, Skip Sandman, has 4 percent of the vote. Mr. Sandman, who has previously attracted 4 percent of the vote here as a Green Party candidate, almost exclusively wins voters who disapprove of President Trump, and voters who live in the Duluth area, which leans heavily Democratic.

Third, there’s evidence of improved Republican standing in conservative areas since early September, including in the nearby North Dakota Senate race. If there’s a broad trend toward greater polarization of the electorate along the lines of the presidential election, that might be particularly helpful to Republicans in a conservative area where Mr. Trump won by 15 points. And while Democrats do often win here, it is worth noting that this is a socially conservative area that opposed same-sex marriage by a wide margin in 2012. The Kavanaugh Supreme Court nomination fight may be helping Republicans here, too.

Have the union leaders figured out yet that their members are no longer voting as they are told? That is what caused the swing in Ohio. The only unions voting Dem these days are .gov and teachers.

Exactly. IMHO Public Employee Unions shouldn’t even be legal but that is a debate for another day.

They figured out that the leader of one party is bringing back manufacturing jobs to the country and he’s not part of the Democratic Party.

managing expectations. It’s a hard come down from riding a beautiful blue wave to getting crushed in a red tsunami.

But send money! Because the Republicans are UNEXPECTEDLY pulling ahead. Your candidate is soooo close. Send your money now!

WHAT WONDERFUL NEWS! NOW…if he will also vote and act like a Republican instead of a RINO, this region could prosper like other parts of the country. Minnesota has an ugly habit of picking the worse Political freak they can find, and that attitude is contagious for their neighboring states. Keith Ellison or Heidi H. are only one example.

I feel honored to have my home district mentioned! Democrats ran the wrong candidate. Had the union endorsed dem got on past primary I think it would have been a tossup. Radinovich is a MPLS sipping soy boy – his commercials are hilariously pandering…”From a family of hard workers….

All the contests have been close since Oberstar originally lost the district but I would be pleasantly surprised if it’s by this margin for Pete.

Slightly related, when is Al Franken’s old seat up for election? Would like to see that flip too.

This election cycle – Tina Smith replaced Frankenstein who is a far lefty and a Planned Parenthood executive to boot. She has been consistently in the lead from anywhere to 6-9 points.