Hillary Aide Says She Could Run Again, But Do Democrats Want Her?

Hillary Aide Says She Could Run Again, But Do Democrats Want Her?

Why stick to someone who couldn’t beat Donald Trump?

The question is, do the Democrats want her? Hillary has done her best to stay in the limelight, inserting herself into the narrative, giving speeches and interviews, and going on a 13 city tour with her husband President Bill Clinton.

Yet her approval rating remains low and some of her comments have had the left moaning and groaning.

Her longtime aide Reines cannot believe that his boss does not have a spot on lists for possible 2020 Democratic presidential candidates. From Politico:

“It’s curious why Hillary Clinton’s name isn’t in the mix—either conversationally or in formal polling—as a 2020 candidate,” said Philippe Reines, her longtime gatekeeper in the Senate and at the State Department. “She’s younger than Donald Trump by a year. She’s younger than Joe Biden by four years. Is it that she’s run before? This would be Bernie Sanders’ second time, and Biden’s third time. Is it lack of support? She had 65 million people vote for her.”

Even if half of those people would no longer support Clinton in another election, Reines argued, “there’s no one in the Democratic Party who has anywhere near a base of 32 million people. That’s multiples of what a Sanders or a Warren have.”

Reines said his biggest fear for the Democratic Party is that they realize, only in hindsight, that dismissing Clinton for the errors she made in 2016 was a mistake.

“Chalking the loss up to her being a failed candidate is an oversimplification,” Reines said. “She is smarter than most, tougher than most, she could raise money easier than most, and it was an absolute fight to the death.”

Does that mean she will run in 2020? Reines told Politico that the possibility is “somewhere between highly unlikely and zero, but it’s not zero.”

Some Democrats agree the party shouldn’t brush aside Hillary since she won the popular vote. Democratic strategist Bob Shrum believes the choice has “an element of sexism” and people have “frustration that she lost what people perceive as the unloseable election and an element of Clinton fatigue.”

Others wonder why she should be punished and silenced for losing an election compared to others like John Kerry and Bernie Sanders.

It also doesn’t help that Hillary has not been a graceful loser. She has shown bitterness and disdain for Americans who had the nerve not to vote for her. She has not taken responsibility for her loss or admitted the mistakes she made (Wisconsin? MICHIGAN?). The fact that her campaign was all about her. “I’m With Her” isn’t exactly inspiring while Trump campaigned on ways to Make America Great Again.

A Gallup poll from September showed that Hillary’s favorable rating remains at an all-time low at 36%. 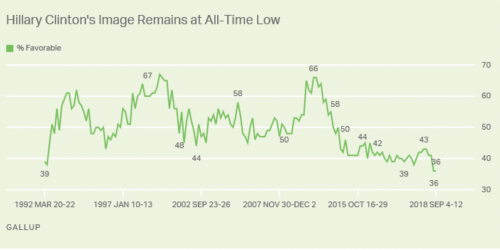 Hillary shot herself in the foot last weekend when she said no abuse of power happened when her husband, at the time the most powerful man on the planet, had an affair with intern Monica Lewinsky. She still thinks Bill was right not to resign.

Don’t forget that four other women has accused Bill of sexual assault while Juanita Broaddrick has accused him of raping her. Throughout the last few decades, Hillary has trashed and tried to damage these women. Interesting coming from a woman who said sexual assault victims deserve to be heard and believed.

These remarks caused outrage from the left with publications like ThinkProgress, The Guardian, and Vanity Fair putting out articles that criticized her “tone-deaf” comments.

Hillary and Bill’s 13 city tour has tickets on sale between $120 and $370, but instead of doing something thoughtful with the profits, the Clintons are keeping it. Hillary could use them as a way to clean up her name, but it looks like she won’t.

Let’s not forget Hillary’s comments about how civility cannot exist until the Democrats have power again. I may not be former First Lady Michelle Obama’s fan, but I loved the tongue lashing she gave Hillary on the Today show:

“We want them to grow up with promise and hope,” Obama added. “And we can’t model something different if we want them to be better than that.”

Hillary’s political aspirations are over. It has nothing to do with sexism. It has everything to do with the fact that she’s a horrible person who couldn’t beat Donald Trump.

I’ll encourage the Ds to follow through, but the Al-n-Jill Franken-Stein ticket would have given us more laughs.

Please rig this one too, DNC.

With four years of success, the debates will be nothing more than Trump giving her the long over due spanking she deserves.

I hate to say it, but the odds of this economy going two more years without a major blowup are incredibly low. Jugears handed Trump several bubbles on the verge of popping, and Trump was too quick and eager to take credit for the economy. Housing, equities, student-loans… all ready to blow.

Economic sabotage would not surprise me one bit. They’re completely unhinged.

That would be great. She’d suck up all the DNC money, resources, and TV coverage as she campaigned from her Hoveround.

She has the money in her slush fund to put up a strong primary bid. This plus rigging could get her in the running again. Democrats have no shortage of money, they can easily put another billion on her.
Actually i think they are grooming new blood.

She, literally, needs to run, so she can blame any arrest on “political vendetta”. If she’s just a regular citizen in the next few years, she’s Gitmo bound. She HAS to run. Think about it. If her name is not in the hat, she is open to investigation (real). She needs the excuse of “actively running for office”.

No, running for President doesn’t protect her. Being President would. As President, she’d be essentially untouchable until after removal from the office. That’s what impeachment is. But as a mere candidate, she can be arrested and prosecuted for spitting on the sidewalk, just like anyone else.

If I were a Democratic presidential hopeful what would I do?
I would sit this one out, prepare for 2024, and try to paint myself as a statesman for the next four years.

Hillary doesn’t have just one base in the Dem party. She has two. One which wants her to run and one that wants her to just drop dead. Guess what? Both groups are the same size. It doesn’t bode well.

Me I want her to run because it exposes her supporters more. Makes draining the swamp easier.

I also don’t think losing to Trump is disqualifying. After all how many Republicans lost to him?

I do think she has shown an amazing ability to snatch defeat from the jaws of victory, and can only uscceed with a great deal of propping up.

Her jumping in just add to the internecine battles and creates more confusion. All the better.

Hillary is just another proof that Democrats are unwilling to address entitlements.

As long as she’s wearing an electronic ankle bracelet, I’m fine with her running in 2020.

I suspect that this is just posturing. A few days ago, Biden stated they he would only run (maybe) if Hillary doesn’t run. So this changes the discussion away from Biden and gives Hillary yet more free press as everyone speculates.

I am guessing it is a way to protect her from being charged.

Precisely. It would be portrayed as a “constitutional crisis” were she to be charged with anything. Hell, the Dims will howl like loons if she’s even investigated. And the cognitive dissonance will make them even more stark raving mad than they already are.

Bill and Hillary are on the “Our World Today” tour, and keeping the profits.

I can’t wait for the “Gotta Pay the Bills” tour.

It’s not about what the Lefty Party wants, it’s about raking in “contributions”.

I’m convinced that Hillary paid off Warren’s aides to convince her the DNA test was a good idea to get her out of the way.

I believe the answer is far simpler: Warren is both vain and stupid.

Never ascribe to malice that easily explained by stupidity (and egomania masking an inferiority complex).

I think that we should all pack the polls for the dim caucuses and primaries and vote for her (even if we have to write her name in) to ensure that she has to go up against President Trump again.

I can see the headlines now, “President Trump easily wins reelection by the yuuugest of landslide!”

Best way to avoid prosecution is to be actively running for President. It would be politically impossible at this late time to go after Hillary if she is an active candidate.

That picture… she looks like she tried to fart and crapped her pants.

BWAAHAAHAA!!
Caption should read: “I swear…I thought it was just gas!!

There’s a medical term for that: Shart

Why stick with Hillary? WHy stick with Pelosi? I can tell you why. The are the two cash cows of the Democrat party.

Tell me that picture wasn’t taken just after she learned that the Russians had ponied up $145 million.

If she can walk up the stairs to the Supreme Court unassisted – I say RUN.

Watch for a jump in the body count. That’ll show whether she’s serious or not.

I like to he way her eyes are always pointing in different directions.

That’s not freaky at all.

We have a lot to thank this corrupt, talentless traitor for: but for her corruption, talentlessness and treason, DJT might not have become president, either she or Jeb! would have – meaning, we would have lost our country.

Dead Body Was Pulled From The Potomac River With Hillary’s Dirty Secret:

Speaking of the likes of ‘Rapo Bill’ Clinton: