Hillary Clinton always has had a strange relationship with the MeToo movement.

On the one hand, she wants all women to be believed:

On the other hand: 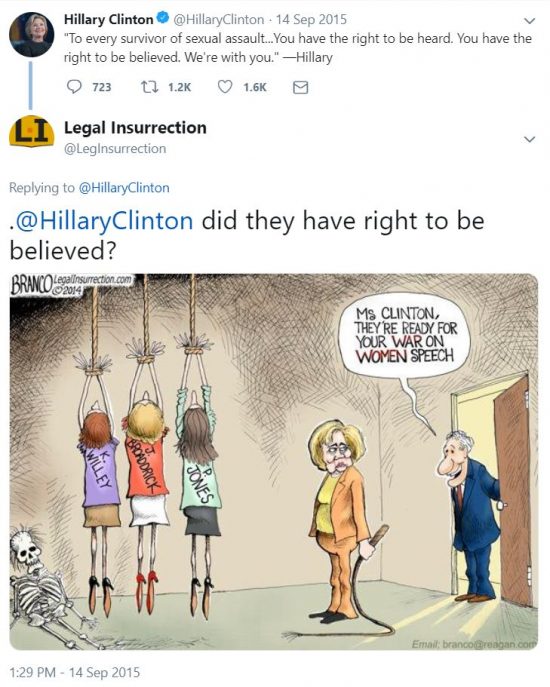 Now Bill’s affair with Monica Lewinsky was not a sexual assault, but it was the exercise of power by a powerful man over a subordinate young woman.

In the #MeToo movement, Bill would be considered the equivalent of a sexual assault perpetrator because 22-year-old Lewinsky was not in a position to give true consent to such a powerful older man.

Hillary was asked if she thought, in retrospect, Bill should have resigned.

Can you guess her answer? Do you think there was even a one in one million chance Hillary would apply to Bill the standards applied to other men?

The former secretary of state said Sunday on CBS’ “Sunday Morning” that Bill Clinton was right when he refused to step down in 1999, after the House of Representatives impeached him for perjury and obstruction of an investigation into his affair with White House intern Monica Lewinsky.

“Absolutely not,” she said when CBS correspondent Tony Dokoupil asked if the former President should have resigned….

“She was an adult,” Clinton said, before quickly turning the conversation to President Trump.

“But let me ask you this: Where’s the investigation into the current incumbent, against whom numerous allegations have been made and which he dismisses, denies and ridicules.”

Thanks, Sessions: she couldn’t be free to pollute the nation without you.

Btw, has anyone noticed the similarities between the infamous Dreyfus prosecution in France? It’s probably where the anti-Semites of the left continue to find inspiration:
https://en.wikipedia.org/wiki/Dreyfus_affair

— That is, the similarities between the Justice Kavannaugh inquisition and the Dreyfus affair.

This is a textbook call for anarchy.

Our country is tearing itself apart and much of the reason is due to Hillary and those around her. Despite the fact that we try not to prosecute politicos of her caliber, it is evident that we will never begin to heal until she is in jail and the process discloses those who have enabled her.

I’d like to see the histrionic, Hillary-worshipping “Me-Too” mob and its jackboot constituents, defend these remarks.

A married President propositions a starstruck, twenty-year-old intern for sexual gratification, and, shrew Hillary contends with a straight face that this doesn’t represent an abuse of one’s power and position? She is contemptible.

Jezebel, Ahab’s queen, from the Bible. Reading it, you can see she had the balls in that relationship.

Athaliah, daughter of Ahab and Jezebel who ruled over Judah.

She would put them all to shame given the opportunity

Thanks — I will check them out.

But, I assume that, at least as far as recent history is concerned, termagant Hillary is peerless

In the fictional realm, Lady Macbeth may be a distant second. Maybe all the three hags together… but they weren’t anywhere so vain, smug,and conceited.

As Kissinger said… “power” is the ultimate aphrodisiac. How many women said they would service him to maintain their political power? Maybe Bill didn’t see the line of women waiting as an abuse of power…. just opportunity.

What’s the difference between her and any Soviet-era propagandist?

Soviet Propaganda, evil as it was, was artful:

The Soviets were our enemies….. wait, no, that’s not it….

Having a whole organization that solely existed to suppress, crush, and silence actual women…by any means…who were victimized by the rapacious Dollar Bill, all in pursuit of pure power was OK…???

If that isn’t an “abuse of power”, nothing could be.

I didn’t think I could loathe anyone more than Obama. I now know that I despise Hilary even more. She is evil!

Just curious: after seeing all the invective here against clinton, no one mentions the outrageous pass given to her by Sessions. Why?

Oh…hahahaha…was just about to say “well read the very first post precious” then realised it was from you!! Hahahah 🙂

I guess you will just have to do with a post from Rags that DOESNT include any mention of T-RUMP!

I agree it was an abuse of power by Slick Willy.

She was no star struck intern caught unaware.

But more importantly, he was the most powerful man in the world, and her boss, and should have kept it in his pants.

If NOTHING else, clinton should have known sexual dalliances in the White House with employees – while he is married – could cause him to be extorted, or cause whoever is on her knees under his desk to get ‘pillow talk’ from him that consists of top secret information.

Hillary clinton should be forced to live under a desk for the rest of her life.

One would think that by now even CBS would be sick of this old loser.

At this point in time I would have to speculate that she is paying for any airtime that she gets. I don’t think they are putting up with her, I just think that they need the money and she has some.

A lot of men can understand why Bill would look “outside of the marriage” for feminine companionship.

Monica was not and is not ugly. When a woman tells a man that she wants him, it’s very powerful.

The worst thing that came out of the Lewinsky story was the most wicked woman of her era, Linda “snitch” Tripp.

It is a curiosity, just how similarly Chrissy Blasey Ford resembles Linda Tripp.

FWIW, I hope that Monica eventually finds someone who invests as much into a real life relationship with her as she brings, herself.

As to Hillary? Haha, may she and Adrea Mitchell get a room with Babwa Waltours and do an interview with Mary Mapes and Dan Rather!

You are one very confused puppy.

“The worst thing that came out of the Lewinsky story was the most wicked woman of her era, Linda “snitch” Tripp.”

We have very much different definitions of wicked…

I live in North Louisiana, so we are very, very familiar with the Clintons and their goings on. It is a known fact that Hillary has several other lovers, one of which lived in Longview, Tx., but she likely has moved since.

So hang on…in a question about stepping down they ask her about the ONE consensual fling he had BUT completely ignore actual alleged RAPE (the one he had nearly a million dollars to hush up)!?!?!? THAT alone should have meant his immediate stepping down as President (or even better, NEVER getting to that position to start with).

I guarantee you she was sent the question before hand so she could have a convenient answer ready to go, which funnily enough she did.

The day this woman gets in front of someone NOT supportive in the lame stream fucking media is the day she will be destroyed live on TV. So you know that will NEVER happen.

I thought believe was the operative word for the Commiecrats,unless it’s the Harpy Hag.
Lock Hag Up and throw away the Effing key.

Could it be that Hilllary gave Bill a pass to do whatever he wanted sexually?

Uh, it wasn’t the affair he had with Monica, even though a real man should have seen this as a huge danger to himself and should have kept it in his pants regardless of the temptation. It was his perjury, he lied repeatedly under oath, which was the reason he was impeached. He should have been caught out in all the sexual assaults he did too. He should have been removed from office, and they both know it.

Of course we also know that they were guilty as hell in Whitewater (this name always strikes me – Whitewater is only needing the “gate” added, but the media protected him and Hillary)but Arkancide is a powerful motivation against testifying.

…..and yet she also argued that DJT was disqualified to run for President because he told some self-deprecating jokes on the Billy Bush tape.