Two US soldiers identified after their remains returned from North Korea

Two US soldiers identified after their remains returned from North Korea 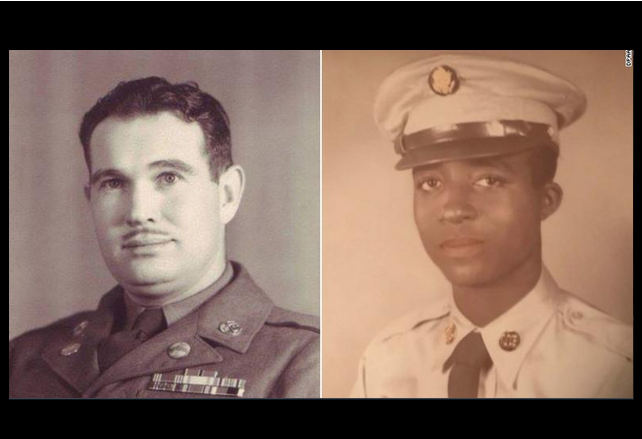 One of the terms of the Singapore Summit agreement signed by President Donald Trump and North Korean Chairman Kim Jong Un was that remains of American soldiers would be returned to this country.

A few weeks ago, 55 of those remains were back on American soil and the process of forensic analysis began.  Now it is being reported that two of our heroes have been identified.

Sgt McDaniel’s dog tag was the only one sent with the remains and was presented to his sons in August.

The remains were repatriated in July at President Donald Trump’s request.

“These heroes are home,” President Trump tweeted in announcing the two men’s identities on Thursday.

“Hopefully their families can have closure.”

Department of Defense records indicate that both soldiers died in the November 1950 Battle of Unsan. There are still 1,700 service members missing from that battle.

The remains were discovered in box 14 and box 16 of the 55 boxes and were some of the most complete of the 55 returned, with individual soldiers contained in each box, DPAA officials said.

Both sets of remains are in Hawaii, at the Defense POW/MIA Accounting Agency’s lab. The families will now be able to request the remains, which will be wrapped in a green Army blanket that is secured with two pins, a tradition that dates back to World War I. They will then be transported to the family for burial.

Sgt McDaniel, of Vernon, Indiana, was deployed to Korea in August 1950 to serve as a medic. He was 32 years old.

His battalion and the South Korean forces they were sent to support were overrun by Chinese forces in October near Unsan, 60 miles (96km) north of Pyongyang.

Pfc Jones, of Nash County, North Carolina, was a member of the 25th Infantry Division, sent to battle Chinese forces in November 1950.

Last week, I noted that one South Korean official indicated that the meeting between North Korean leader Kim Jong Un and South Korean President Moon Jae-in would focus on denulcearization of the Korean peninsula.

Indeed, that seems to be the case, as reports indicate significant promises are being made by North Korea.

North Korean leader Kim Jong Un offered Wednesday to shut down a nuclear missile testing and launch site in a development welcomed by President Trump, raising hopes of a second meeting between the two leaders in the quest for a long-sought Korean peninsula denuclearization deal.

Kim made the offer to close down the Dongchang-ri missile testing center and launch pad at a summit in Pyongyang with South Korean President Moon Jae-in. The two signed an agreement to “eliminate all danger” of war on the Korean peninsula, recommitting to the denuclearization of the peninsula.

“We had lived together for 5,000 years and have lived separately for only 70 years. I urge all of you to end those hostilities and take a big step toward reunification,” Moon said before 150,000 North Koreans in the May Day Stadium.

“Chairman Kim Jong-un and I will work hand in hand to build a new country, with 80 million people across North and South Korea. Let’s move forward into a new era together.”

Furthermore, the summit between the two Koreas produced other important and positive signs:

There appears to be enough progress on the “path to peace” to revive the fledgling talks between Washington and Pyongyang.

Trump was upbeat. His Secretary of State, Mike Pompeo, said the US “is prepared to engage immediately in negotiations to transform” the relationship.

Additionally, after receiving a letter from Kim recently, another summit between the President and the Chairman is being considered. Perhaps even more of our lost soldiers will be returned and identified very soon.

Prayers for the souls of Sgt Charles H McDaniel and Army Pfc William H Jones, and for the comfort of their families. We thank them all for their service and sacrifice.

President Trump gets proven results where all others failed.

Heroes of the “Forgotten War.” I’m glad that they’ve finally come home, however tardy their arrival may be.

I always find it interesting how Hollywood has found ample material and thematic fodder for making movies about World War II and the Vietnam War, but, the Korean War has totally escaped attention. Is it the short duration of the conflict and its perceived stalemate outcome? I simply can’t figure it out. Whatever the geographic demarcation may indicate, South Korea’s status as a vibrant democracy and an economic powerhouse, plus, a gain of 1,500 square miles of territory, contrasted with North Korea’s singular totalitarianism, misery and oppression, make me construe this outcome as an amazing victory.

The entire peninsula would today be under the horrific and brutal dominion of the communists, where it not for U.S. and allied action, here. Samsung, Hyundai, LG and the rest of the South Korean powerhouse corporations simply wouldn’t exist.

A random check using DuckDuckGo produced a number of hits. Here’s one of them that lists ten movies plus an Honorable Mention List of nine. I’ve seen some of them, although it has been quite awhile. So, I can’t be of much help about them.
Link: https://moviebabblereviews.com/2018/05/17/top-10-movies-set-during-the-korean-war/

Thank you for that link — I appreciate it. 🙂

You’re welcome. I do faintly recall that some of the scenes, winter ones, were tough to view. It in their spirit we need to fight the current pestilence which has been visited upon our nation’s government.

“Prayers for the souls of Sgt Charles H McDaniel and Army Pfc William H Jones, and for the comfort of their families. We thank them all for their service and sacrifice.”

“As a Marine, Jack Macy took that ‘leave no man behind’ thing very seriously.”

I have no words other than to say, Welcome home my elder brothers in arms. May you rest easy in the soil you faught for.

If I’m going to be shaped by something it’s not going to be by a movie but what’s forged at the point of a .45.

Just in case some of you were wondering if your sons or daughters were safe with me as a naval officer, I was always capable of “Not now, later.”