Remains from North Korea deemed to be likely American soldiers

Remains from North Korea deemed to be likely American soldiers

Meanwhile, sanctions are still in place while North Korea presses South Korea for a formal end to the Korean War. 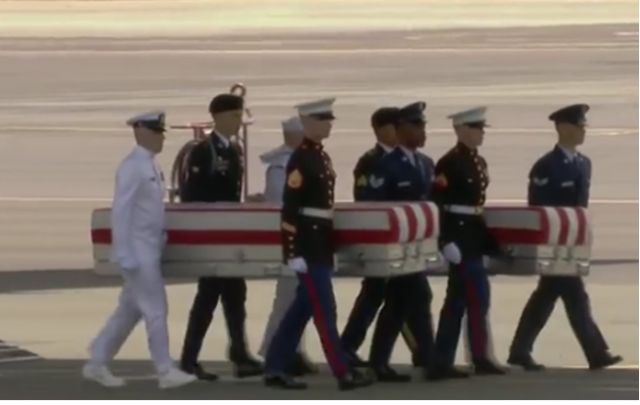 In late July, North Korea transferred the remains of 55 U.S. soldiers killed during the Korean War, in keeping with the agreement made in Singapore signed by Chairman Kim Jong-un at the historic summit with U.S. President Donald Trump.

Now, forensic analysis has shown that the remains are “consistent” with being American service members.

Location information accompanying the boxes suggested most of the remains are those of U.S. Army soldiers who fought in the famous 1950 Battle of Chosin Reservoir.

Conclusions that the human remains were likely Americans from the Korean War was based on their state of preservation, as well as Korean War-era materials in some boxes that included boots, canteens, buckles, and buttons, according to Dr. John Byrd, the DPAA’s chief scientist who reviewed the contents of the boxes in North Korea.

Byrd also indicated that the North Koreans have been cooperative during this process.

“The North Korean officials that we spoke to were very forthcoming and candid with us and a couple of things they told us was that these were remains believed to be American and from the Korean War,” Byrd told reporters at the Pentagon on Thursday.

“They also, though, were clear with us that they couldn’t be sure with how many individuals were represented in each box,” Byrd added.

More news from the Korean Peninsula this week shows that the United States is still keeping the economic heat on North Korea.

The Treasury Department slapped sanctions on a Russian bank on Friday, accusing it of processing transactions for North Korea in violation of United Nations sanctions.

Agrosoyuz Commercial Bank knowingly facilitated “a significant transaction” on behalf of a person affiliated with North Korea’s weapons of mass destruction, the agency said in a statement.

The statement also detailed a long relationship between the Russian bank and North Korea. The bank held, processed and transferred millions of dollars for North Korea, despite sanctions which are meant to isolate it economically.

These sanctions are really to harsh the #FakeNews narrative that Trump is Putin’s stooge.

In other news, a letter delivered to Trump from Chairman Kim indicates that there may be further movement in toward both parties going forward with their mutual commitments as outlined in the Singapore agreement.

U.S. President Donald Trump thanked North Korean leader Kim Jong-un, Thursday, after receiving a “nice letter” from him. White House spokeswoman Sarah Sanders said the correspondence was “aimed at following up on the meeting in Singapore” and “advancing the commitments made” in the leaders’ joint statement, where North Korea pledged complete denuclearization.

…The letters are seen as a sign that trust between the leaders has not collapsed.

“It goes to show trust between the leaders, and trust is needed for the next steps to be taken in denuclearization and in improving relations,” a foreign ministry official said.

‘We’re confident that Chairman Kim remains committed to denuclearization,” he said. ”The world is counting on it.”

Finally, North Korea is pressing South Korea to formally declare an end to the war, which was one of the goals of an agreement signed by representatives of both countries in April of this war and is called the Panmunjom Declaration.

A remark made by a Southern Korean official regarding North Korea’s pressing them for peace was interesting:

The Ministry of Unification said Seoul will continue working to narrow the differences between Washington and Pyongyang to declare an end to the war by the end of the year.

“The two Koreas are on track to fulfill the Panmunjeom Declaration by establishing bilateral trust,” ministry spokesman Baik Tae-hyun said in a media briefing Monday.

That declaration includes a goal of denuclearizing of the Korean Peninsula.

I wish my father could have witnessed more of the good things which are happening in regards to final end of the Korean. But alas, he passed before it was a matter of accomplishment. To that end, I will convey to all parties involved, a vey heartfelt well done and hope for continued success in finally resolving a 65 year old conflict.

My father is a veteran of the Korean war, hanging on by a thread at this point, about to turn 90. He has two masters degrees, meeting my mother ended the PhD. He hates Trump, watches MSNBC all the time because he has little mobility. The funny thing is that he agrees with much of what Trump is doing, but is too stubborn to admit Trump is doing good things. He also really disliked Hillary. Unfortunately, a stroke followed by Parkinson’s has really damaged his mind. Still, he and I spar about Trump.

My father just passed. on July 4th, just a bit over two months shy of turning 90, so he got to see the summit. He was with one of the first groups of American troops sent in when the excrement hit the fan. So some of those guys being returned might have been some of his buddies.

Every POTUS in the past four decades has tried to achieve this. If Obama had done it Jim Acosta and the rest of the Prog Press Corp would be on their knees working for their dinner. But Trump, so crickets.

CNN reportedly gave this less than a minute and MSNBC zip, zilch, nada!

2nd ID. Second to none. I spent enough time at Camp Casey to qualify for membership in the VFW.

Support, brethren. It’s what it is all about.

It’s actually not all that unusual. We cross train. Ask me about the Navy Spitfires at Normandy.

A man who I will always consider a dear friend was the last Korean war combat veteran I knew died about ten years back.

“As a Marine, Jack Macy took that “leave no man behind” thing very seriously.

In the first days of the Korean War, he ran through withering fire to pull wounded comrades to safety, and he tried unsuccessfully to retrieve the body of a dead Marine.

For that he was awarded the Distinguished Service Cross, the nation’s second-highest award for valor, behind only the Medal of Honor…”

I’m the luckiest man alive. This man gave my first job. My Monsignor captured eleven NORKs at pistol point. Although, and if he were still with us, he’d be the first to tell you those NORKs had enough and wanted to quit.

How many roll models can one man have in one lifetime? My dad, the Coastie. My friend, the Marine. My parish priest, the well armed Navy Chaplain.

For me, the Korean war will always be personal.

The President of the United States of America, under the provisions of the Act of Congress approved July 9, 1918, takes pleasure in presenting the Distinguished Service Cross to Sergeant Jack E. Macy (MCSN: 1086690), United States Marine Corps, for extraordinary heroism in connection with military operations against an armed enemy of the United Nations while serving with the Company H, Third Battalion, Fifth Marines, First Provisional Marine Brigade (Reinforced), Fleet Marine Force, Pacific, in action against enemy aggressor forces northeast of Chindong-ni, Korea, on 8 August 1950. At this time Sergeant Macy was acting platoon sergeant of a rifle platoon that was being relieved on position while still engaged with the enemy and under continuous heavy small arms fire and sporadic mortar fire. When the relief was completed, it was discovered that three men were missing. Sergeant Macy, with absolute disregard for his own safety and despite heavy fire from enemy weapons, voluntarily returned to the formerly occupied position in search of these men. During his search, and at the risk of his own life, he administered first aid to several wounded men comrades. After locating the missing men, all of whom were wounded, he made three trips through heavy enemy fire to carry the wounded men to safety. He then made a fourth trip to recover the body of a fallen comrade, but, because of intense enemy fire, was ordered to cover the body and leave it in position. Sergeant Macy’s display of outstanding courage and devotion to duty is in keeping with our most cherished ideals and reflects great credit on himself and the military service.”

Hopefully the body of the man he wasn’t able to recover was among those the NORKs returned. Thank you, Donald Trump.

I thought we were meant to go to war with the Norks? All them big brain liberals saud that was inevitable with Trump getting elected.

My father turned at 86