“Disparaging my family for political gain is disgusting.” 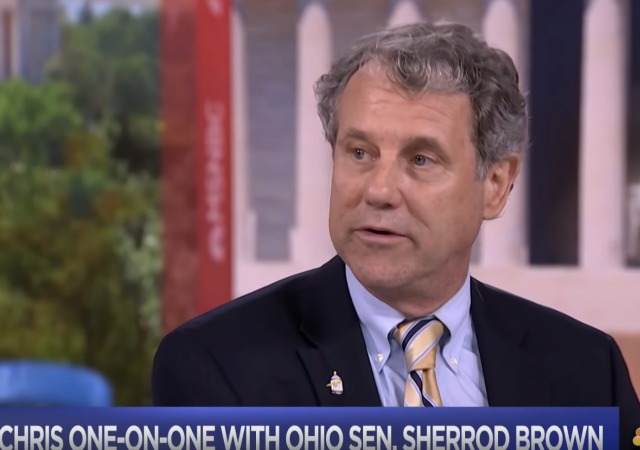 Larke Recchie has slammed the ad and described Republicans as “disgusting” for using her family to score political points.

In 1986, Sen. Brown was in the midst of a tense divorce with his then-wife of seven years, Larke Recchie. Records from the Franklin County Common Pleas Court in Ohio show that Recchie said in her divorce complaint that Brown “has been guilty of gross neglect of duty and extreme cruelty.”

Recchie also sought a restraining order against Brown to keep him from “doing bodily harm” to her. Recchie claimed to be “in fear for the safety and well-being of myself and our children due to [Brown’s] physical violence and abusive nature” and said Brown “intimidated, pushed, shoved and bullied” her on multiple occasions.

A judge granted a seven-count restraining order against Brown. Recchie soon accused Brown of violating the order and said he “pushed me up against the wall with his arms in order to pass and entered the house.”

According to a Columbus Dispatch article from 1989, Recchie again accused her ex-husband of violent behavior. This time, she said, Brown pounded on her door so hard that he broke it and assaulted her new husband, Joseph Recchie. Both Recchies filed police reports at the time but did not end up pressing charges.

Brown has always denied the allegations. Recchie continues to insist that her accusations “were only ‘angry words’ as part of an ‘unfriendly’ divorce.”

Recchie may have a point because over the years her and Sherrod have remained close. Recchie and her husband have even held fundraisers for Brown. From 10TV:

In a statement released from Brown’s office, Brown’s ex-wife Larke Recchie said, “This isn’t the first time someone has gone after my family to score cheap political points. I’m dismayed that Congressman Renacci would do something this shameless, despite the fact that I’ve already addressed this matter. I was proud to support Sherrod in 2006 and 2012 — just as I am this time around. Anyone who suggests he is not an honorable man is just wrong. He’s a great father to our daughters Emily and Liz and he’s a wonderful grandfather to our grandchildren. Disparaging my family for political gain is disgusting, and Congressman Renacci should know better.”

But Renacci quickly jumped on after the ad aired. He emailed out this statement: “Brown’s well–documented history of domestic violence is deeply troubling. Ohioans deserve to know all the facts, and judge his fitness for public office for themselves.”

Larke Recchie has slammed the ad and described Republicans as “disgusting” for using her family to score political points.

Is it factually incorrect, Larke?

“Recchie continues to insist that her accusations “were only ‘angry words’ as part of an ‘unfriendly’ divorce.””

In other words, Recchie is saying she lied in a court proceeding. There’s a word for that. . . on the tip of my tongue. . . .

“Calm and reasoned” and “divorce proceeding” are seldom seen in the same vicinity, let along the same universe.

Women (and some men) say some things during divorce they would never say at any other time. I’ve seen them spitting mad and terrified at the same time, and worse, the poor kids can get caught in the middle and used by both sides. A good divorce attorney during this trying time is a godsend. A poor one can make a terrible situation worse.

I’ve been divorced twice. Once I hired a lawyer to protect my interests. The other, I negotiated directly with her lawyer. Guess which time I got my butt handed to me.

Lady, I think it was a mistake not to pick up a game program when you entered the park today. If you had done that you would have seen that it’s the D team that’s doing all these disgusting things. Going through life dense is admittedly tough. But going through life as a Democrat is even worse.

Clearly, we need an FBI investigation.

“Both Recchies filed police reports at the time but did not end up pressing charges.”

“Brown has always denied the allegations. Recchie continues to insist that her accusations “were only ‘angry words’ as part of an ‘unfriendly’ divorce.””

It’s this kind of dirty laundry which makes many good people stay out of politics. Except for damaged fetishists, who wants to be publicly abused this way??

It’s also this kind of dirty laundry which makes me not care about it. I’m at a point in life where all I care about is ideology and narrative. IE: will this politician vote the way I want and advance the cause of liberty?

I can’t vote for this Brown guy (and wouldn’t), but if I could, I don’t care about the ugly business from 30 years ago. I. Don’t. Care.

Why? I’m not a values voter. I’m a smaller, limited government voter. If you’re a politico who can advance the ball, however slightly, in that direction, I’m on board.

Again, unless there’s a capital criminal conviction involved, I don’t care what desk you gummed, or knothole you abused, or shower games you played.

The biggest stupid in this stupid parade by many democrats is the vast amount of dirty laundry on their side of the room which a complicit media is more than happy to ignore.

Yet, democrats are the first to fall on their fainting couch with Victorian Vapors – for all the cameras to see, naturally.

LocomotiveBreath: Have to agree with you about the damaged fetishists who enjoy being humiliated in this way. So bizarre to see the females out there with insults written on their bodies and most normal people don’t realize, they LIKE being embarrassed/humiliated in that way, it’s a hobby for them.

And if I could just remember which words have double consonants and which don’t, the world would be a better place.

If we all remember, Obama’s ascension in Chicago and Illinois politics was on the back of two conveniently timed public release of his opponents’ sealed divorce documents. That’s okay too, though.

Indeed.
I was about to make this post (first half) but you beat me to it.

The ex-wife might now dismiss her apparent perjury and filing false police reports as being just “angry words”, but as a family law attorney who has to fight against such accusations on a regular basis, I take them seriously. Too bad that it is too late to charge her with perjury — although rarely will any judge in family law matters pursue perjury charges no matter how blatant and harmful the lies and no matter how strong the evidence!

Exactly, Geologist, she made SPECIFIC factual claims. Claiming now they were outbursts from anger would be completely irrelevant to the truth or falsity thereof…

And I agree, perjury just isn’t prosecuted and that in and of itself is a damn crime.

Huh? But that is in the new rule book.

Democrats don’t want to play by the new rules.

Does anyone know her maiden name? The Browns lived down the street from us and I’m trying to determine if she is local to Mansfield. I wish that I had Dr Ford’s ability to remember 40 yo high school stuff. Google is not being my friend here on this. FWIW, Sherrod moved to Lorain specifically to take over the 13th district which includes Oberlin when Comrade Pease retired.