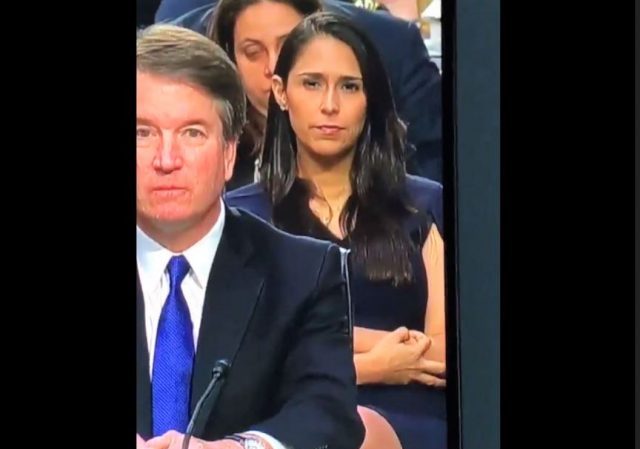 It’s getting hard to describe how insane #TheResistance to Brett Kavanaugh has become.

The first day of hearings, which involved no testimony by Kavanaugh, devolved into a circus.

We’ve already covered today the antics of Democrat Senators trying to abort the hearings by repeatedly interrupting, the disruptions by Linda Sarsour and crew, and the stage and phony claim that Kavanaugh refused to shake the hand of the father of a Parkland school shooting victim.

All those things were stupid political theater.

But there is an evil attack on a former Kavanaugh law clerk, Zina Bash, which shows how malicious #StopKavanaugh has become.

Zina Bash: “What they’re missing is a long history, a very long record of enforcing laws that protect the American people and the American economy.” pic.twitter.com/uOvOJ6bSwB

Bash was sitting behind Kavanaugh as #TheResistance disrupted the hearings. She was in camera view.

Kavanaugh’s former law clerk Zina Bash is flashing a white power sign behind him during his Senate confirmation hearing. They literally want to bring white supremacy to the Supreme Court. What a national outrage and a disgrace to the rule of law. https://t.co/uQGOpNa6xg

She even was accused of being a neo-Nazi.

This neo-nazi is Zina Bash. She’s intentionally throwin up White Power signs at a Supreme Court Justice confirmation hearing. On national TV. She works for Kavanaugh & is also one of the writers for Trump’s immigration policy. This is their new Amerikkka. #StopKavanaugh https://t.co/Dw3ZD2M5bk

The attacks on Bash spread, and she and her family were the subject of articles at Heavy and elsewhere discussing their personal lives.

So who is Zina Bash? She’s the half-Mexican, half-Polish Jewish lawyer whose family on her father’s side survived the Holocaust.

So, I've checked in with Twitter to see that "Zina Bash" is trending. Huh. I know her. Why is she trending? She made a white-supremacist hand gesture? This is the nuttiest, stupidest allegation in the history of the world (or at least tied for). Really, y'all: Get a life.

Bash’s husband, appointed as a U.S. Attorney by Trump, came to her defense:

Trump Derangement Syndrome is real, and there will be collateral damage.

Actually there were a lot of people asking who she is ( including me ), and I don’t think they were asking because of hand signals or gestures.

As my grandfather would have said; “Aye, very easy on the eyes she is!”

She’s a gorgeous young woman- obviously, VERY smart, too! I looked at her hands and thought to myself, she’s taken yoga classes- how else could you stay calm while the Democrats are going insane around you?

If you don’t close the “O” it becomes WC – Water Closet.

A place to leave your cramp.

Or a call for relief.

Or a location for a clandestine server.

If the Left wants to believe that the White Power salute,then , with the help of the media, it is now and forever more will be proof that Kavanaugh is a racist

No, they don’t. And they’re blind to it.

It’s only McCarthyism if THEY say it is…….

That is the Orwellian way.

Strange that after all this effort they can’t find anything actual to whine about. Kavanaugh must be Mr Clean, if they’re reduced to pretending that a gesture made by somebody who isn’t even the candidate means something nefarious.

Well I read/heard that “Brett” was trending as an object of scorn and derision. They are truly desperate.

Yeah but they all missed the green frog sitting next to her.

I guess for The Resistance™, it’s a case of “desperate times call for desperate measures”. You can’t get much more desperate than this.

Well, I guess I shouldn’t underestimate them. They’ll prove me wrong.

Looks like the circle game to me. Anyone who looks at it, gets punched.

Beat me to it…I was going to say that it looks like none of these people have played the circle game.

The funniest part about this is that the Okay/White Power sign was a meme created by 4chan to goof on the left being unhinged conspiracy kooks.

The left doesn’t even know the source of the memes they’re spreading!

You’re talking about the people who turned #pissgate, a 4chan meme, into a literal federal case. They are completely insane and/or evil.

Everything has been racist for the last 10 years. During the Obama administrations, the race card was played continually, especially by President Obama. Since the election of Donald Trump, it has been played continually. The only good thing to come from this is that most ordinary Americans simply ignore it now. They know that it is all contrived. This is just further evidence that the liberal/Progressive left is losing and they know it.

The Left hasn’t given up on calling everything “racism”; they’ve just switched to “white power”.

Second verse, same as the first.

These Dems/Progs are REALLY reaching. For what, I’m not sure. Up until today, I never knew there was a “white power” sign.

The A-OK sign is most certainly a white power hand signal. Even if it’s used unintentionally. The SPLC told me so.

Okay is kind of meek, don’t you think?

Oh, and when an officer raises his palm motioning you to stop. Heil Hitler! Stalin, Mao, Mugabe, et cetera. You don’t want to be a Tutsi at that moment.

Guys are looking at that chick and noticing her hands? Were shoes not matching her outfit either?

She has lovely hands, arms, … Alas, she’s married, with children.

She is attractive, and with her Jewish lineage is probably quite intelligent.

Maybe she’s a closet, or worse, overt diversitist who denies individual dignity and indulges in color judgments.

Is there a special web page that we white power advocates can go to and learn these signs? On the dark web,maybe? Or is that racist, too?

People need to get a grip.

Oh how I wish that South Park was currently making episodes. Eric Cartman and the hand gesture are a formula for comedy gold.

Someone needs to edit a pic of the senate conference room to show a shadow hand puppet of a rabbit on the ceiling right above her.

These psychos want to govern us.

I am very afraid that these fascist pig “Progressives” (a single word oxymoron if there ever was) could ever be in power. The Nazis (1920s – 1940s Germany) started the systematic murder of millions over this sort of stupidity. Not to mention the millions murdered by Lennon Stalin and Mao for political purposes.

“Not to mention the millions murdered by Lennon Stalin and Mao for political purposes.”

Me, personally, I live in fear of being asked by the McCartney-ists if I “am now, or have ever been, an Elvis fan”…..

“I know that there are good folks on both sides of the political divide.”

This intersects with the Roger Ailes story, because it acknowledges the power of The_Donald, a reddit forum that is so feared it is censored from the front page of reddit.

It has far more influence than Fox News.

As someone pointed out, in ASL that is the sign for a**hole. Who was speaking? Inquiring minds want to know

Blumenthal? He’s got a weaselly affect.

Actually, the ASL sign for a**hole is different. Even though the finger arrangement is the same, the orientation and movement of the hand is different than the ok sign.

Obviously this all started with Mel Allen (Israel), the Alabama born White Supremacist who was play by play “Voice of the Yankees” from the 40s to the 60s. He had a sponsor – a NY beer named “Ballantine” and he used the “OK” hand sign to proclaim “Make the three ring sign” for Ballantine. This is where it all started – an Alabama born Jewish sports announcer White Supremacist.

Oh yeah, for those in Rio Linda: /s

And once again my hand brace sent this off before I was finished. Ballantine Beer used three interlocking rings as a corporate insignia:

So this is the media’s/democrat’s new version of an old theme. It used to be that the ready photographer would snap a pic of a Republican they hated at the right moment so it appeared he was doing a “Heil Hitler” salute. Now we are getting pics of people resting their hands in a certain way and calling it white supremacist. I can’t wait to see how this evolves over the next 20 years.

You know what I want to know? Who is Keith R. Dumas, aka @rubin_kd?!

He started this mess. He should have HIS personal info. posted, affiliations examined, and his family harassed.

Not that I encourage using the left’s Alinksy tactics against them…..nah, I would never do that….. 😉 (That’s sarcasm, btw; just explaining to all you easily-triggered, no-sense-of-humor leftists.)

Why not encourage it? We’ve been letting the Left slime us a Nazis for many years now. And when they started talk about punching “Nazis” we pretty much shrugged it off.

What did we think was going to happen?

History is pretty clear on what happens to people that allow themselves to be regarded as subhuman. Are we expecting a different result?

Those low lifes making all the noise are the ones who may well be subhuman.

Those low lifes making all the noise are the ones who may well be subhuman.

There’s a white power symbol? Or did someone just make that up?

There are white power symbols. This isn’t one of them; someone on 4chan made it up for the specific purpose of getting lefties to believe it and make fools of themselves with displays like this one.

White privilege is paying to support those who lack those traits.

I’m sure that Twitter has done the “appropriate” thing and cut these lowlifes off its service. Oh? They haven’t…? There is a reason I stopped going to Twitter.

I always thought that was a “Peter peeper symbol.” Caught you looking.

She had her hand on her chin, but her thumb was touching her throat while Chris “the Marxist” Coons was making a fool of himself today. I think that was code for “I hope he chokes on a chicken bone…” but I could be wrong. Maybe we should put it on twitter? S/O

Actually it looks like she’s picking at an ingrown hair on her arm.