Completely ignoring Keith Ellison among others. 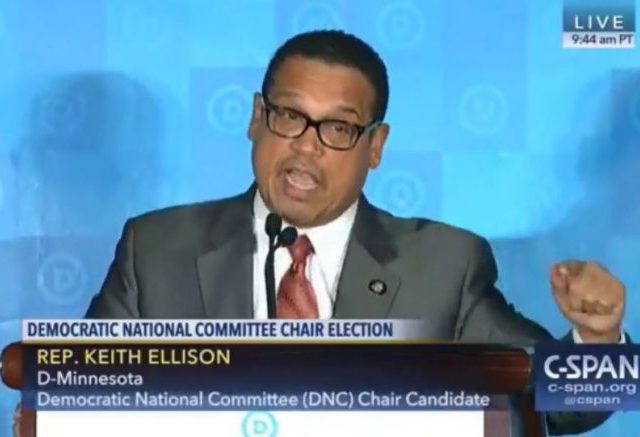 There’s just one problem. The Daily Caller discovered that the PAC, which has connections to the leftist Women’s March, has only targeted Republicans.

The Mercury News reported (emphasis mine):

“It’s time to end a culture that protects the careers of powerful men who abuse women or other survivors and put this issue before the voters,” said Dauber, the PAC’s chair. “We are going to put rape culture on the ballot across the country.”

Among the five candidates named so far on the PAC website are a Tennessee state representative accused by three women of having sexually abused them when they were teenagers on the high school basketball team he coached; a Texas state legislator who voted against extending the statute of limitations for rape victims; and a Minnesota congressman who has blamed women for being sexually harassed, saying “don’t look like some slut and you won’t get hit on.”

All five are Republicans and have denied any wrongdoing. Dauber said the all-volunteer group also will target Democrats, although most likely at the primary level. At least 28 state lawmakers accused of misconduct ran for re-election or another office this year, according to the Associated Press. Of those, 16 advanced to the general election: 10 are Republicans; six are Democrats.

Oh so they WILL target Democrats? WHEN and why not at the national level? I guess that’s easier since a lot of primaries have already finished. After all Democrat Minnesota Rep. Keith Ellison, who is also the deputy chair of the DNC and nominee for Minnesota attorney general, has legitimate allegations of physical abuse against women.

Back in August, Karen Monohan sat down with CBS News to describe the alleged abuse. She said she has video and showed text messages:

She said she called a friend after the incident and told them she was “at the lowest of the low.”

Monahan said she saved the video on her computer. This past Saturday, Monahan’s son, Austin, posted a message on Facebook saying that in the middle of 2017, he found the video, almost two minutes long, showing Ellison dragging his mother off a bed and telling her to get out of his house.

Monahan said she should not have to release the video of the incident in order to be believed. She believes her words should be enough.

Monahan told CBS News she has the video on a thumb drive.

Monahan provided one text of her mentioning the physical altercation to Ellison in December 2017.

“Keith, We never discussed — the video I have of you trying to drag me off the bed, yelling get the f*** out now, calling me a bitch and saying I hate you bitch,” the text message read. In follow up texts viewed by CNN, Ellison did not directly address the physical altercation.

Other messages viewed by CNN do not specifically show incidents of verbal abuse.

In one, she tells Ellison that she plans to mention him in her book and he says she does not have his permission to do so. Other text messages showed Ellison and Monahan discussing removing her things from the apartment they shared after Monahan moved out. The conversations are at times cordial.

Ellison has said that Monahan fabricated these claims and the media and Democrats have brushed it aside even though she has evidence. He also claims the other woman who has accused him of abuse was the one harassing him.

The Daily Caller mentioned others this PAC should target:

Delaware Sen. Tom Carper admitted in a 1998 interview that he slapped his ex-wife in the face, leaving her with a black eye. Carper is up for re-election in November and won the party’s nomination on Sept. 6.

California congressional candidate Gil Cisneros was accused of sexual harassment by a fellow Democrat. UltraViolet, a left-wing feminist organization, previously slammed the Democratic Congressional Campaign Committee for not withdrawing its support of Cisneros.

New York Rep. Gregory Meeks, who is running for re-election, was accused of firing one of his staffers after she reported being sexually harassed by one of his campaign donors. The House used taxpayer dollars to settle the staffer’s lawsuit against Meeks.

All four Democrats denied the allegations against them.

Hypocrites. How they can ignore Ellison, the biggest name out there besides Kavanaugh, blows my mind. Keep showing your true colors, leftists.

I’m shocked, shocked I tell you!!!

Looks like the dimms may finally have gotten the memo. At least a few are beginning to bring up Ellison, whose accusers’ allegations are far more timely and credible.

Of course, what could be more convenient than an opportunity to throw him under the bus in order to then claim that the GOP must do the same?

Dagwood, the Republicans would happily throw Ellison under the bus.

So, if they are unsuccessful in stopping one of their dem targets at the primary, will they completely turn tail during that target’s election campaign?

So from now on allegations without evidence will be enough? That is the new normal. Frightening.

“”The House used taxpayer dollars to settle the staffer’s lawsuit against Meeks.””

They’ve had so many incidents, they actually set up a taxpayer paid fund to pay off their victims.