About to become first African-American woman from Massachusetts elected to Congress. 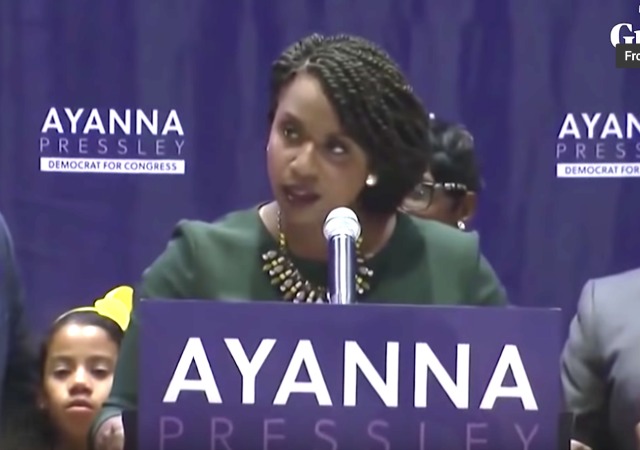 Pressley, backed by Democratic Socialist Alexandria Ocasio-Cortez, will run unopposed in November and will make her the first African-American woman elected to Congress from Massachusetts.

This mirrors Ocasio-Cortez’s defeat of Joe Crowley in June. She backed Pressley along with “Our Revolution, the offshoot of Vermont Sen. Bernie Sanders’ 2016 presidential campaign.”

Pressley’s rise to victory is slightly different because “Capuano had fiercely contested the Massachusetts race by racking up endorsements, attending debates and highlighting his consistently liberal voting record in one of the most Democratic districts in a traditionally Democratic state.” Plus Pressley has a political background unlike Ocasio-Cortez.

Pressley is a far-left progressive. However, she did not illuminate her opponent as a moderate because Capuano is just as progressive. But I guess not progressive enough even though he opposed the Iraq War, Patriot Act, boycotted Trump’s inauguration, and “funneled millions of dollars home for much-needed transit, housing and health care projects.”

Instead, Pressley highlighted the fact that the district’s needs have changed and her life experience. From The New York Times:

She argued that the needs of the district had changed over time and that the overwhelming “hate” coming from the White House required more than simply voting the right way. Battling Mr. Trump and overcoming longstanding economic and racial inequities required an entire movement, she said, suggesting she was better positioned than Mr. Capuano to spearhead that effort with what she called “activist leadership.”

Moreover, she argued that her life experience — her father struggled with drug addiction and was incarcerated for most of her youth, and she is a survivor of sexual assault — better prepared her to help people who have lived through trauma and other struggles. Perhaps the defining line of her stump speech was this: “The people closest to the pain should be closest to the power.”

She supports the abolishment of ICE, calling the agency “irrevocably broken.” From Boston.com:

“If elected I will work with federal leaders to rehouse the non-immigration enforcement functions of ICE — including human trafficking and money laundering investigations — elsewhere in the US Department of Homeland Security, while immediately eliminating funding for enforcement and removal functions,” she said.

Pressley will not support any immigration reform that includes funding for a wall on the border.

At first she didn’t approve of the “Medicare for All” health care plan, but has “recently came around on a single-payer-style system.”

When it comes to Israel, she refused to answer a debate question if she supports the BDS movement:

Addressing the conflict more generally, she wrote that, if elected, she would push for policy that ” recognizes the basic human rights of both Israelis and Palestinians and promotes greater engagement between the two sides.”

“Building empathy and understanding through intentional diplomatic efforts and grassroots engagement is essential to reaching a sustainable, long-term solution to the conflict,” she said. “As I have always said, those closest to the pain should be closest to the power.”

Capuano said he does not support it, but believes “others should be free to advocate it.”

Well, that’s one way to drain the swamp!

More likely to spread the swamp across the nation.

Once is a fluke; twice is coincidence, but three times is a pattern.

Thanks to diversiversity indoctrination camps across the nation, the noxious weed of marxism is not just being cultivated, it’s bearing fruit.

Allow me to interject some sanity into this situation.

Loco Ono won her primary but due to New York law the incumbent is still on the ballot in November. So Loco Ono hasn’t won the seat just yet.

Pressley’s district is majority-minority. As noted her positions are pretty much identical with Capuano’s so she probably won the election based on affinity voting rather that any great shift in the wants of the district’s voters.

Gillum got just over 1/3 of the votes in his 4 way primary race, meaning that 2/3 of the voters did not select him. The Republican nominee, DeSantis, got 56% of the votes in a 6 way race. Not sure that independent voters, who couldn’t vote in the primaries, will be drawn to Gillum’s radical program whereas DeSantis tends to be a bit more main stream.

I was simply speaking in terms of these ptimary races, and not to the upcoming general elections or the broader electorate in terms of ideology.

Communist enemy of the American People.

This country is in huge trouble, to think these far leftists even have a chance to be elected which system of government goes against everything we used to stand for. Of course the Democrats were moving this way a long time, but they kept it hidden and masked. Now these clowns are being given positions as elected for pushing this horrendous ideology, and in this case – unopposed – it is just beyond my comprehension.

I feel so sorry for my family and the generations to follow who will have to live with the consequences of this.

Don’t get upset. She’s just one of 435 and will have absolutely no power or authority.

She’s going to vote exacty the same as the guy she’s replacing, and she’s a lot more honest about what she believes.

What’s funny is that white progressives, especially the old ones used to holding power, are finding out that this Brave New Party doesn’t have any more use for them. They’re going to be like the Old Bolshie’s after Stalin started to consolidate his hold.

She will actually have less power than the person she replaces who had 20 years of seniority and contacts.

The revolution is killing off its founders. White Dems are no longer needed to propagate the cause.

You haven’t seen anything yet if Joanne Hardesty makes it to Portland City council this Fall. She is a walking MAD TV sketch.

“About to become first African-American woman from… ”

Enough of sentences like this. I hate the label ‘African-American’ and would never dream of calling myself ‘Irish-American’

My son is half black, by a Frenchwoman born in Guinea (very dark) and if anyone could lay claim to being ‘African-American’ he would be it. But he is not. He is American.

Hyphens denote who is part of the culture and who is not. My ex-wife was not ‘French-African,’ she was French. She is not now a ‘French-American’ and would be incensed at being called ‘African-American.’ She is an American.

It is worth noting that there are hyphenated people in France: French-Arab. They do not consider themselves French, nor do the French, except in a legal sense.

I am a Phallic-American, and my ex-wife, Miss Segenation, was a Vagino-American. It was a mixed marriage.

Those are the best

I think that people who follow politics extensively are trying to make a case which doesn’t exist here.

I think that this was more about a majority made up of several minorities which voted against the white male running for the office. This is why these gerrymandered districts exist.

Only a very rich and prosperous country can afford to strive to be just like Africa.

This has become as inane as people posting “First!” on forums.

With respect to this event, I cannot claim authorship of the the attached, but read it from a relatively rare non-left winger posting on the Boston Globe web site:

The French Revolution is coming to mind. Traditional liberal Democrats are learning that starting revolutions is a lot easier than stopping them. The revolution they have been demanding has become the uber-Progressives’ Reign of Terror. Gillum, Ocasio-Cortez and Pressley will all find that rousing the rabble and “disruption” is a lot easier than serious policy-making. We can expect a lot more of the former than the latter from them.