Confirmed: Elizabeth Warren and other Kavanaugh haters are humorless

Confirmed: Elizabeth Warren and other Kavanaugh haters are humorless

Brett Kavanaugh made a joke in 2015, a takeoff on the “What stays in Vegas” format, but Warren and others pretend not to get the joke

MSNBC and others won’t stop with the #StopKavanaugh stupid.

The Las Vegas tourist commercials are something of a cultural marker: “What happens in Vegas, stays in Vegas”:

I have little doubt I’ve told a joke at some time using the “what stays” format.

MSNBC dug up a clip of Brett Kavanaugh at a speech in 2015  in which he made a joke that anyone but the most dishonest and/or humorless people would understand to be an attempt at humor.

Kavanaugh gave no other context for the joke, but it gained attention anyway after it first surfaced on MSNBC because the judge has recently been accused of misconduct while he was a high school student.

The worst take was from Elizabeth Warren: 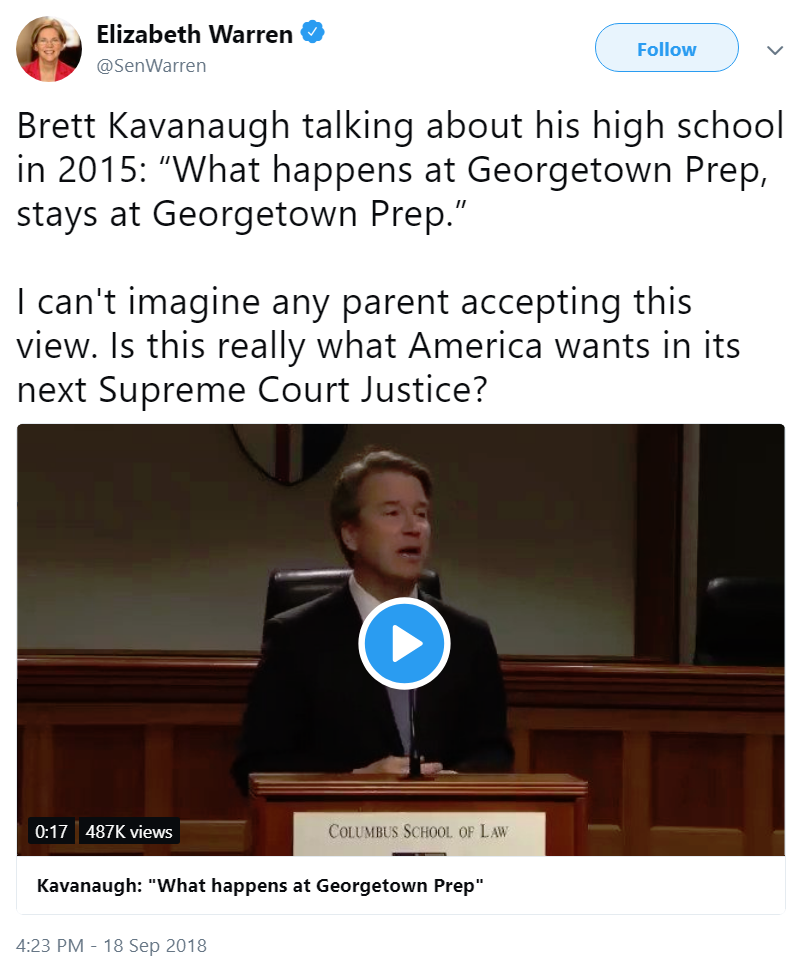 Or does she know it’s a joke, but not care so she can score a political point?

Kavanaugh is humorless. That joke was tired in 2015. Warren is just oblivious.

notamemberofanyorganizedpolicital in reply to RodFC. | September 18, 2018 at 9:19 pm

guyjones in reply to notamemberofanyorganizedpolicital. | September 19, 2018 at 12:26 am

Not fair — you best give Squaw Warren big heap credit; she find “Smoking Gun” to capture “Dances with Snakes” in big heap lie.

The Friendly Grizzly in reply to notamemberofanyorganizedpolicital. | September 19, 2018 at 6:23 am

In her case, did she deny a right, or a preference?

Love watching lizzard (pronounced Liz Zard) running away when someone asks her for some dna.

If she had an honest sense of humor she wouldn’t be a Democrat. High cheekbones? Really

Even though she looks Scandinavian who are known to have “high cheek bones”, of course hers are from some fictional native American source so she could benefit career wise far more than she could have otherwise.

Flake has flipped. It’s over.

If the accuser doesn’t show, he’s moving the confirnation forward.

Next, she will want to bring Jimmy Hoffa and Judge Crater as witnesses before she testifies

You’re right! And Amelia Earhart will fly them to Washington.

Does that mean the fate of the Supreme Court of the United States no longer hinges on whether two teenagers dry humped 35 years ago?

Unfortunately, Warren *is* the joke. And not a funny one at that.

Oh FFS McConnell grow a pair and hold the vote. Quash this fucking bullshit before it gets completely out of hand.

I think each (R) senator needs to get a copy of Codependent No More. As P.J. O’Rourke put it, step 1: get over it, step 2: stay over it. The time for Tough Love for the Dems is now.

I don’t think that “humorless” is the most accurate characterization, here. “Intellectually dishonest,” “sanctimonious” and “transparently desperate” would be more apt. And, now that I think about it, I think that “sociopath zealotry in service of a totalitarian ethos” would be apt, as well. Because, the behavior being shown by the Dumb-o-crats is a form of sociopathy, where advancing the Party agenda, at all costs, matters more than truth, ethics and fair play; matters more than destroying a person’s life.

That the vile Warren would take an utterly innocuous remark, made as an obvious attempt at injecting levity into a lecture, and, laughably present it as some sort of alleged “evidence” of Kavanaugh’s ill character and/or guilt in these ridiculous allegations, says more about Warren than it does about Kavanaugh, and, nothing laudable. But, we already knew that this grandstanding twit was utterly loathsome in every respect.

Were the context different, she’d be just another Gossiping Gertie spreading nasty rumors to the other housewives on the block. “Did you hear what happened with Flo’s husband at that resort they went to? I heard through a friend of mine; she was told by one of her friends that he was seen entering the pool area around the same time as some floozy…”

Fauxcahontas. She doesnt laugh at that clever joke either.

What impresses me most about Elizabeth Warren is that she sounds so much like Benito Mussolini, an Italian progressive in the first half of the 20th century.

58-year old female lawyer veteran here. Agree on the female vote, but disagree on 1920 being the year America started downhill. The federal reserve in 1913 has killed the value of our money, made saving a fool’s errand, made recessions turn into depressions, and I could go on and on.

Also, the income tax amendment, the 16th I believe occurred around 1916.

Marxism has no room for jokes,smiles or a kindness.

We live in the age of “That’s not funny.” Humor (lame or otherwise) will be punished. Anything you say may be used against you.

Joe McCarthy is beginning to look like an amateur. Or perhaps he just lived in an age when no one worried that one might be punished for “inappropriate laughter.”