US cuts funding of UNRWA

US cuts funding of UNRWA

UNRWA is a force for anti-Semitism and anti-Israel incitement. 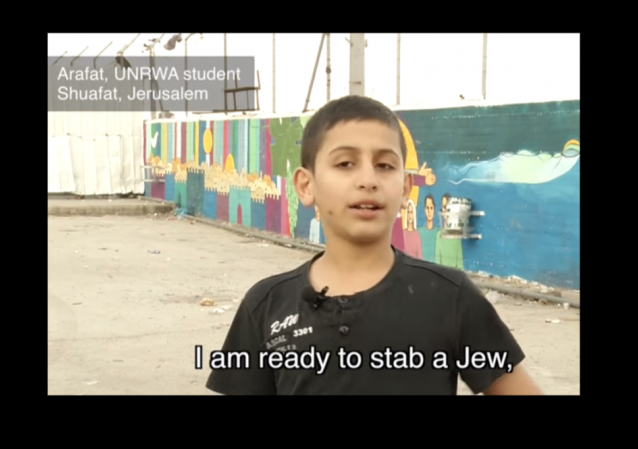 The U.N. Relief and Works Agency (UNRWA) is an anti-Israel organization which perpetuates Middle East conflict.

UNRWA does so primarily in two ways. First, it defines Palestinian refugees not only as those who fled during the Arab attempt to extinguish Israel’s 1948 birth, but also subsequent generations. This has created the political and legal myth that several million descendents of several hundred thousand refugees having a “right of return” to Israel.

For 70 years UNRWA has fueled an unrealistic hope and has encouraged millions of Palestinians to “dream” of a ‘right’ of return, because unlike every other refugee population on the planet, UNRWA allowed Palestinians to inherit refugee status. In preventing peace and reasonable compromise, it’s a false hope that’s been even more devastating for the Palestinians than the pack of lies and false promises told to them by their own leaders back in 1948.

The second way in which UNRWA perpetuates the conflict is by teaching Palestinian children to hate Jews and Israel. We have posted in detail on this subject several times:

Momentum has been building for the U.S. to cut funding for UNRWA.  And it finally has happened.

The Trump administration announced Friday it is cutting nearly $300 million in planned funding for the UN agency that aids Palestinian refugees, and that it would no longer fund the agency after decades of support. Instead, it said it would seek other channels by which to aid the Palestinians.

The administration castigated the UN’s Relief and Works Agency for Palestine Refugees (UNRWA) for failed practices, and indicated that it rejected the criteria by which UNRWA defines Palestinian refugees, whereby the UN agency confers refugee status not only on original refugees but on their millions of descendants.

The State Department said in a written statement that the United States “will no longer commit further funding to this irredeemably flawed operation.”

“The fundamental business model and fiscal practices that have marked UNRWA for years – tied to UNRWA’s endlessly and exponentially expanding community of entitled beneficiaries – is simply unsustainable and has been in crisis mode for many years,” the statement said, a reference to the fact that the agency grants refugee status to all the descendants of the original Palestinian refugees, something not granted by the UN to refugees from any other places.

The Palestinian Authority and Hamas both attacked the U.S. over the move, the Jerusalem Post reports:

A spokesman for Palestinian Authority President Mahmoud Abbas called the US decision a “flagrant assault” against the Palestinian people, and a “defiance of UN resolutions.”

“Such a punishment will not succeed to change the fact that the United States no longer has a role in the region and that it is not a part of the solution.”

In Gaza, the Islamist group Hamas also condemned the US move as a “grave escalation against the Palestinian people.”

“The American decision aims to wipe out the right of return and is a grave US escalation against the Palestinian people,” said Hamas spokesman Sami Abu Zuhri.

Abu Zuhri told Reuters the “US leadership has become an enemy of our people and of our nation and we will not surrender before such unjust decisions.”

There is a fear that the collapse of UNRWA will further exacerbate the conflict. But UNRWA is a force for anti-Semitism and anti-Israel incitement. There needs to be an alternative to the fictions and hatred UNRWA nurtured.

How about we cut off funds to the UN?

UNRWA has collapsed because we will no longer pay its bills. Meh.

The “Right of Return” is a fiction that has outlived its time. A person, or an entire people, cannot “return” to a place they have never been! A country called Israel has a history, it has existed in the past; there has never been a country called Palestine, obviating any return of the Arabs that have chosen to call themselves Palestinians.

There may be and likely are thorny political considerations involved in all this but we should not give too much sympathy to a bunch of people who could have, and should have, had their own country in 1948 but who decided they’d rather try for a genocidal war to exterminate Jews rather than live peacefully next to them.

The Arabs chose poorly but it is not the responsibility of the United States to support them in perpetuity because they decided to attempt taking Nasser’s advice to “drive the Jewish dogs into the sea!” There are millions of other Arabs in the area: why don’t they take in their poor, suffering Arab brothers? [Hint: They don’t want them either!]

Other than the comment on Nasser’s “advice” in 1948, you are correct. Nasser apparently was Deputy Commander of Egyptian forces involved in the war, and actually interfaced with Israeli forces and a Rabbi after the hostilities ceased. His real involvement in Egyptian politics started with his efforts to replace King Farouk, which were successful in 1952.

We should contribute as much as the Muslims do to this barbaric camp of savages: nothing.

It has been clear for many decades that international aid funds have been diverted to the purchase of weapons and the construction of tunnels. All nations providing financial support to the arabs living in the West Bank and Gaza need to clean up their “humanitarian” acts.

UNWRA allows jihadists to fire weapons from, and hide in Gaza schools.

We should stop the funding of all terrorist orgs, and this a good start. One more reason why this Career Diplomat at the State Dept is very pleased that he voted for President Trump, and will do so again in 2020.

Finally. UNRWA gave up any vestige of even handedness ages ago.

Why should the (so-called) “palestinians”, have a refugee agency dedicated solely to their (supposed) refugees?

Israel has tried “land for peace” (didn’t work – see: HAMAS). Israel has always wanted to “share the land” with the people that lived there when statehood was declared.

Now – this is going to sound racist – but…

Israel was just another muslim/arab SHITHOLE, a 3rd world northern african country – before the Jews (and yes, their funding) turned the desert into paradise.

The ONLY alleged claim if the pali’s, is an ISLAMIC ONE, via Al Aqsa – a CONQUEST MOSQUE built on the ruins of the JEWISH TEMPLE to preclude the rebuilding of the temple. This was after the final victory of the 2nd crusades (Saladin), and Jerusalem has remained in Caliphate(s) hands until the Ottomans were defeated in WW-I, where it came into British Possession (after the subsequent division of northern africa, between OK & France).

Going on the “spoils of war” theory, that Islam always used to lay claim on real estate – the country “belongs” to the Jewish State of Israel now, and the muslims have been fighting “mini-crusades” ever since.

This is ALL THEATER, and has ZERO TO DO with returning “indigenous inhabitants” that fled the region in time of war (when in reality, they should have taken the jews offer to live as partners, and told the Arab League to F-OFF).

There is no “legitimate claim” to the land, or “right of return” (and land distribution) – there is only the unwillingness of muslims to live as equals with “infidels”, and the (false) sense of superiority, of people who LOST IN BATTLE in think they can weasel their way back onto the land.

They need to daisy-cutter funding to UNRWA.

Is that Jeremy Corbyn as a child in the first picture?