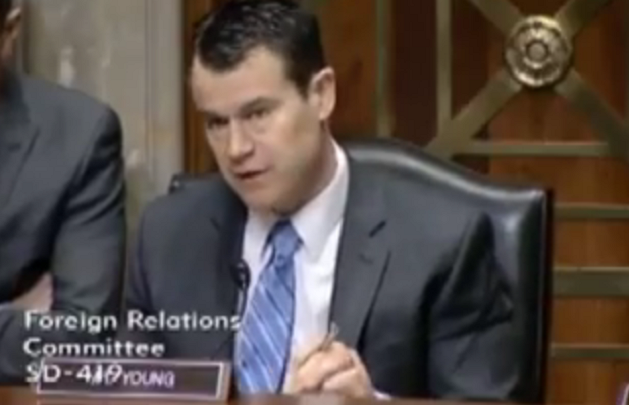 This brief 2-minute interchange last week between Sen. Young, who chaired the session, and Kevin Moley is very informative, substantial and well worth watching.

It shows that a new study of the pervasive radicalization in the UNRWA school curriculum, recently released by the Jerusalem-based research and policy organization IMPACT-se (Institute for Monitoring Peace and Cultural Tolerance in School Education), is beginning to generate a long overdue challenge of UNRWA’s educational work.

In a recent post, we reviewed the IMPACT-se report, New Palestinian Authority textbooks teach “martyrdom as a life goal”.

As we highlighted, the study shows how a new Palestinian Authority (PA) curriculum, completed by its Education Ministry last summer and now being used by all UNRWA-run schools, consistently delegitimizes and demonizes Israel, glorifies terrorism, and basically grooms young Palestinians to believe that “dying is better than living.”

In our post we offered many examples from the IMPACT-se study of this curriculum, which is packed with wording and imagery that rejects negotiations with Israel and promotes prejudices, mistrust, and even religious intolerance and anti-Jewish hatred. 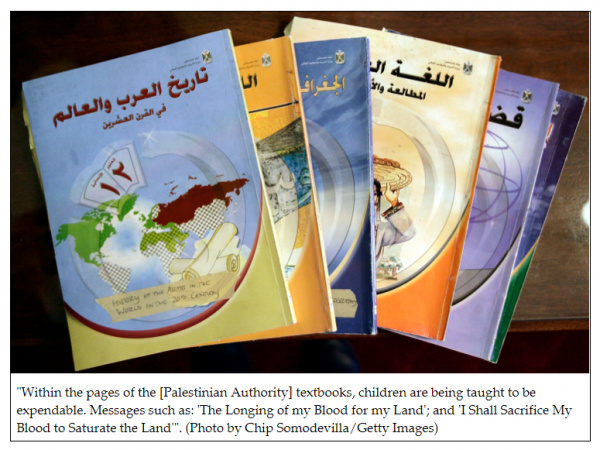 For example, science and math lessons are used to teach violence—Newtonian gravity is taught via the image of a boy with a slingshot targeting soldiers; math exercises instruct students to calculate the number of martyrs in Palestinian uprisings. 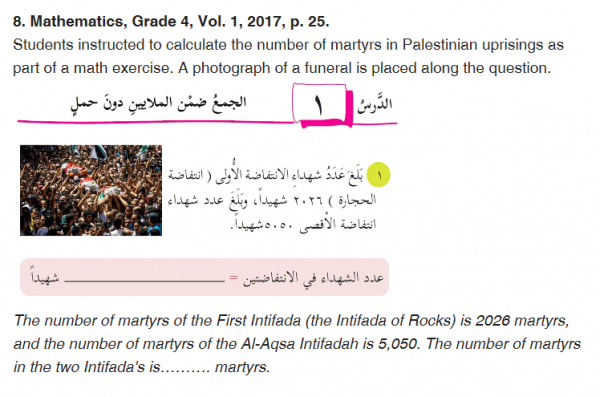 Jews are also depicted in the textbooks as the “enemies of Islam” and as having no holy places in the region. In most cases, “Israel” doesn’t appear on any maps, signifying an “intensification of the nonrecognition attitude” towards Israel. 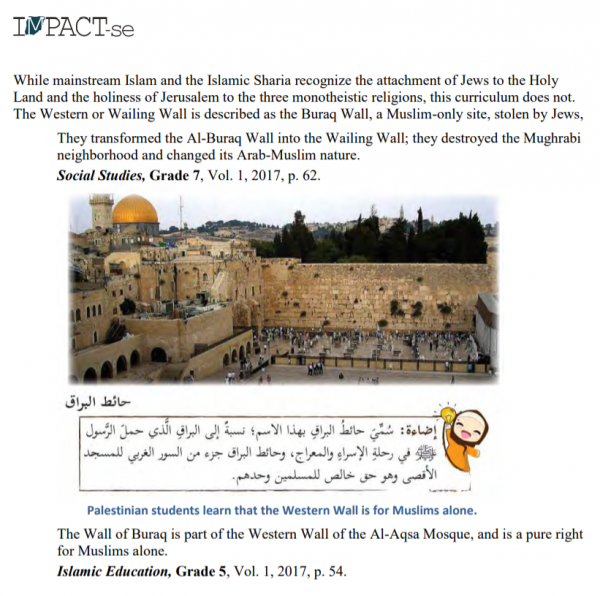 Among the most disturbing entries is a violent passage in one of the schoolbooks where the text refers to the fate of six million “usurper and foreign Jews” living in Israel after it’s liberated by the Palestinians. Here, for the first time in a PA-issued textbook, a poem calls for these Jews to be “annihilated” and “eliminated”: 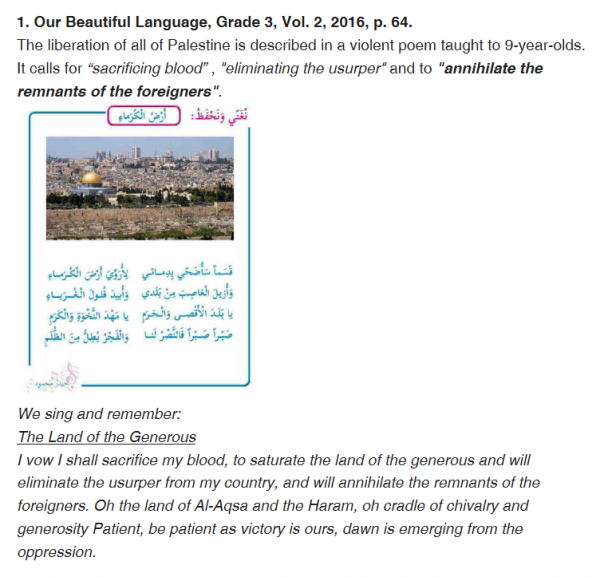 IMPACT-se researchers aren’t the only educators and analysts investigating the PA-supplied incendiary textbooks being used in UNRWA schools, and other recent studies also confirm its central finding: the attitude toward Israel and Jews has gotten worse in the 2017 curriculum, even more so that its predecessors.

But what’s unique about the IMPACT-se study is that it specifically focuses on how these schoolbooks disregard the UN’s own benchmarks for peace education. 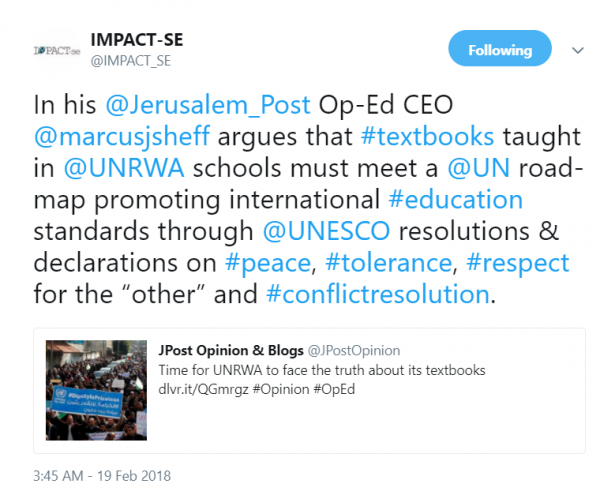 Via a number of resolutions that have been passed by UNESCO, these standards are clear: textbooks are expected to promote peace and tolerance; are mandated to encourage a respect of the ‘other’ as a viable partner for peaceful conflict resolution; and are supposed to exclude all biased and hateful material.

So, in terms of being in compliance with the UN’s own standards, UNRWA is “failing miserably” by adopting the new PA curriculum for its schools.

As we noted in our prior post, in recent weeks IMPACT-se CEO Marcus Sheff and other staff have been presenting their new report to European donors, and some EU officials and European parliamentary members have been expressing “palpable shock” at the extreme levels of radicalization in a school curriculum that they help to support (in 2017, the EU provided $143 million to UNRWA’s budget; Germany followed at $76m, Sweden at $61m and the UK at $60m).

Now some American lawmakers, like Sen. Young, are also voicing their disgust.

In an email this past Friday, Marcus Sheff told me that the Senator’s office has been working with IMPACT-se on UNRWA’s use of the radical PA curriculum. He noted too in the email that he found it “important” that the Senator fully understood that

UNRWA cannot continue to talk about providing a ‘quality education’ to Palestinian children while they daily disseminate hate at the U.S. taxpayers’ expense.”

Last Tuesday, the Senate’s Foreign Relations Committee held a confirmation hearing on Josephine (Jody) Olsen of Maryland to be Director of the Peace Corps, Erik Bethel of Florida to be U.S. Alternate Executive Director of the International Bank for Reconstruction and Development, Sean Cairncross of Minnesota to be CEO of the Millennium Challenge Corporation, and Kevin Edward Moley of Arizona to serve as Assistant Secretary of State for International Organization Affairs.

A prominent businessman, Moley is a former Bush-appointed ambassador. He served from 2001-2006 as Ambassador to the U.S. mission to the UN in Geneva. Prior to that appointment at USUN/Geneva, he was Senior Advisor to Dick Cheney for the Bush-Cheney 2000 presidential campaign. From 1965-1971 Moley served in the Marine Corps, receiving a Purple Heart and Navy Commendation Medal with Combat Valor.

Moley’s testimony before the Senate Committee on Foreign Relations is here.

There’s an audio recording on C-SPAN of the hearing with all three Trump nominees. Sen. Young’s exchange with Moley over the UNRWA issue starts at 53:07 and ends at 55:29 (there’s a transcript of the exchange, but its compiled from uncorrected closed captioning and is unreadable).

The Senate Committee on Foreign Relations has also posted a video of the session. The exchange between Sen. Young and Moley about UNRWA begins at 1:09:28.

A video of the 2-minute segment can be found at this link.

It’s clear from the interchange that Sen. Young has a good grasp of UNRWA’s operations. At the start, he notes its 677 elementary and preparatory schools, servicing some 515,000 Palestinian children.

Sen. Young says that it’s “unambiguously good” that the U.S., as UNRWA’s largest single donor (giving $364 million in 2017, a third of UNRWA’s budget), is “helping to educate children who wouldn’t otherwise receive such an education.”

But the Senator also didn’t mince words when “diving in to the issues of concern”:

Some of the textbooks being used in these schools reportedly include maps that omit the State of Israel, and include images and examples that promote violence and support martyrdom…We all want to encourage a durable peace between Israelis and Palestinians. Textbooks with this sort of content are completely counterproductive…It is difficult to justify to my constituents using their tax dollars to support schools that utilize such textbooks.”

Sen. Young also asked Moley what he was prepared to do, if confirmed, to rectify this situation:

Do you commit to looking into this issue, reporting back to my office within 90 days with a plan to ensure that U.S. tax dollars are not supporting the use of textbooks that foster hate, hate towards Israel, support terrorism or degrade women?”

To his credit, Moley didn’t try to minimize Young’s concerns. Noting the “importance of educating children everywhere, most especially in Palestine”, Moley said,

Senator, I do commit to supporting and working with you and your team on this issue…I would like to think we could use your leverage, the Senate’s leverage, and that of the State Department to make sure that these textbooks are not proliferating.”

Interestingly, Moley also mentioned that his prior working relationship in Geneva with now UNRWA commissioner-general Pierre Krähenbühl could be of value in this regard.

But Krähenbühl seems to be oblivious to the concerns that have rightfully been raised about UNRWA’s work. In a recent world tour to drum up financial support following President Trump’s decision to freeze a portion of U.S. funding to the organization, Krähenbühl reportedly touted UNRWA’s quality education as the “key to a better future” for Palestinian young people.

Last year, when it looked like UNRWA might finally make some much-needed changes to its virulently anti-Israel educational curriculum, Hamas and the PA kicked up such a fuss that those plans were shelved. 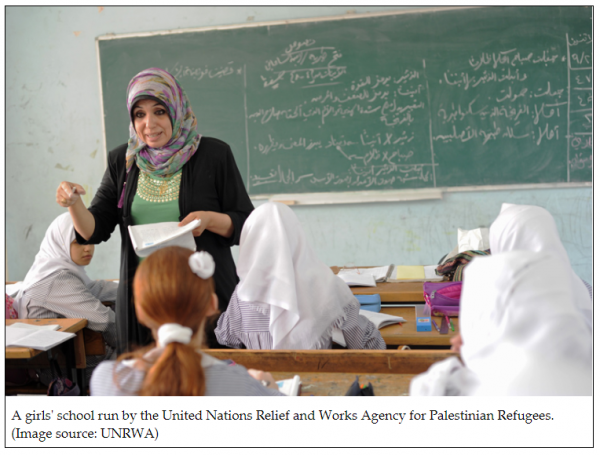 Now, by all accounts the situation with the curriculum is worse than ever.

The new PA-supplied schoolbooks that the organization is using so completely rejects the UN’s own standards for the teaching of peace and tolerance that they basically amount to a “war curriculum”.

Bottom line: The U.S. and Europe, which are the main donor nations to UNRWA, need to start conditioning their funding on curriculum reform and the removal of textbooks which demonize Israel and Jews.

Keep after them. We have an ally in the White House, and it’s time to insist on some changes.

TY for your posting –
how can we present a united response to the Fake-stinians?

bug your senators to pass Taylor Force Act
https://en.wikipedia.org/wiki/Taylor_Force_Act
The Taylor Force Act is a legislative bill co-sponsored in the United States Senate in 2016 by U.S. Senators Lindsey Graham (R-South Carolina), Dan Coats (R-Indiana), and Roy Blunt (R-Missouri). The legislation proposes to stop American economic aid to the Palestinian Authority until the PA changes its laws to cease paying stipends funneled through the Palestinian Authority Martyr’s Fund to individuals who commit acts of terrorism and to the families of deceased terrorists.[1][2][3]

On August 3, 2017 the United States Senate Committee on Foreign Relations passed the advancement of the bill by a vote of 16-5.[4]

guess which party voted NO

The US and Israelis still provide medical, fuel and other aid to these poor excuses for homo sapiens.

I don’t want the US to sink even further in debt just to throw money away in some Middle Eastern shithole. I don’t care who’s festering away in there, that’s what the place is and that’s what it’s going to stay. Don’t blame me for it, and don’t send me the bill.

This has been going on for almost 20 years. Why are we just noticing this now? Might it have something to do with a president who is not going to put up with anymore of this crap? It’s American money. It should fund American values.

It is time and past time to quit pretending the ‘Palestinian’ people in general and the Palestinian Authority in particular actually want peace. We get told to our faces that they desire peace and they teach their children to had Jews in their classrooms.

The Professor has done a good job of exposing Pallywood and it’s lies. It’s time for this type of propaganda to be exposed to all.

Support for Palestinians must end. We cannot expect peace if we fuel war. In the end it will only lead to war anyhow.

This is actually quite funny in it’s own perverse way. The fundamental claim of Israel to all the lands of “Israel” is the old testament and all the demands for ethnic cleansing that permeate that book. So please let’s not get hysterical when some textbook used by the unclean is completely wrong. That one text book is only a few semesters old and can’t do any of the damage that the old book helped create. So please, lets stop blaming just one side for all the problems. Can the righteous also look at themselves too?

There should be ABSOLUTELY NO FUNDNG for ANY TEXT BOOKS to ANY COUNTRY that is anti AMERICAN.
We have children here in the U.S. who have to share textbook or notepads, funding should go to them first.