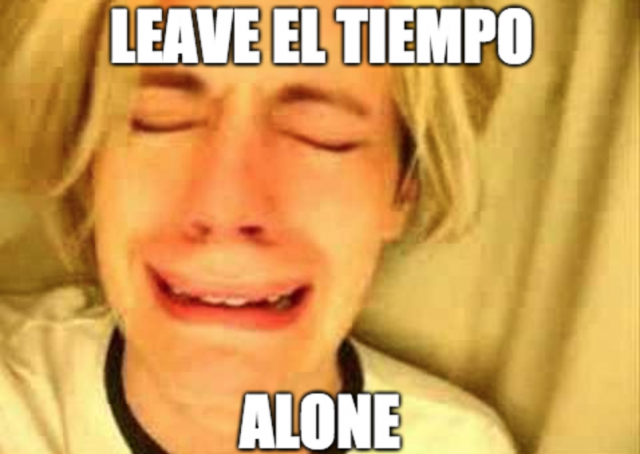 To use millennial speak — I seriously can’t even with this.

El Tiempo shared the picture of Laurenzo and Sessions on their social media channels. But because this is a garbage time to be alive, the restaurant was harassed mercilessly and eventually shut down all of their social media accounts. They were accused of endorsing child separation.

“The posting of a photograph of the Attorney General at one of our restaurants does not represent us supporting his positions. The secret service contacted us that a government official was coming to dinner at our establishment and his identity was not known until he walked through the door.”

“The man came to dinner and he was served without us even thinking about the political situations. We were preoccupied with the secret service and catering to their wants and needs. The only thing on our minds was serving great food and giving great customer service. It was posted without review or approval by ownership and this has lead to everyone jumping to conclusions that somehow we are involved in this political matter. We don’t approve of anyone separating parents and children.”

But that wasn’t enough. So, a little local group protested. From Houston local news:

The group “Tejas Barrios” said the picture is like a slap in the face to Houston’s Latino community because of Sessions’ stance on immigration.

The group is now calling for a boycott and is holding a peaceful protest outside of the restaurant in Houston’s east end at 6:30 p.m. Monday.

“I think it’s something you should think twice about doing. Hosting somebody that is very much against the people that could potentially make or break your business,” said Jessica Lorena Rangel.

Imma stop right there and revisit the part in this story where El Tiempo had no clue who was coming and probably for security reasons. Not that it matters to the Outrage Brigade.

Laurenzo told KPRC on Saturday that it didn’t dawn on him until after he took the picture that some people might assume he approves of or agrees with Sessions’ policies or political views.

“The last thing I ever wanted to do was upset anybody. By no means was that ever the case. It’s just been a huge misunderstanding,” Laurenzo said.

Rangel said an apology isn’t good enough and claims this isn’t the first time El Tiempo has hosted a pro-Trump event. She said it hosted one back in 2016.

“This isn’t just a protest. It goes onto having a conversation of what exactly are his values and if he really is sorry what can we do to make sure this doesn’t continue to happen,” Rangel said.

“It goes onto having a conversation of what exactly are his values and if he really is sorry what we can do to make sure this doesn’t continue to happen.” That’s easily the most fascist thing (and I’ll qualify that by saying I don’t use words like “fascist” often because their overuse has diluted them into nothingness) I’ve read in weeks and I internet for a living.

El Tiempo is a private business. They can do whatever they damn well please and host whomever they want.

As I blogged this morning:

Because it needs repeating (apparently), there is more to life than politics. It’s also possible to stand next to someone who has accomplished much in life while also disagreeing with some of the things this person thinks without losing your damn mind. This feat is known as “maturity.”

We love El Tiempo and will be sure to visit, drink lots of margaritas, and show our support.

I made it a point to never visit any of the establishments that drooled over Obama when he visited the town near me.

But, then again…I had never found a reason to visit any of them BEFORE he came to town.

I’ll make it a point to dine at El Tiempo next time I have to go into Houston. Great food! Great libations! And great service.

I’ll see you there! Good Tex-Mex and a chance to (figuratively) spit in the face of fascism? Who could pass up a double-header like that! Heck, I’m even willing to lend Ms Rangel some scissors to help un-knot her panties!

Well, because it is El Tiempo, wouldn’t you rather give Ms. Rangel a machete instead of scissors?

Or is that just too culturally and racially insensitive of me to suggest?

I’ve never been to El Tiempe before but it’s time to check it out.

Please, go ahead. That’s how I got it. I stole it, and so long ago I don’t even know what genius actually invented it.

Used to be any restaurant was proud to have any major politician in and they’d put a photo on the wall. Gee, Jimmy Carter ate here? And Reagan? No one used to not care, or if they did they’d just roll their eyes and order the damn food and get on with life.

The left is bastardizing capitalism in this country. On the “wrong” side? We will bury you.

I hate these people.
It is not a strong dislike.
It is a hate.

* No one used to care, that is.
Anyway, El Tiempo is a little pricey but tasty.

Everyody is a critic.

Besides, who can blame anybody for despising a sell out like sessions?

There is a huge difference between despising someone and losing your fucking rag over a photo.

El Tiempo will be just fine. Domenic Laurenzo comes from TexMex royalty. I believe his grandmother was Ninfa, the fanous establishments namesake. If this piddly protest were to increase Houstonians would respond with a line around the corner to get in.

Meanwhile in MA, the Mayor of sanctuary city Somerville rips the owner of local success story The Boston Beer Company (brewer of the Sam Adams line of beers) for thanking President Trump for the corporate tax cuts which allow his company to better compete with imported beers from around the globe.

Sam Adams was founded 34 years ago in MA, employs nearly 1000 people in the state and has annual sales approaching $1B yet the mayor of Somerville shreds the guy for meeting with and thanking the President.

Good grief!!! There is a restaurant near me that I like very much. They have photos on their wall of a visit by Bill Clinton AND Geo W. Bush. In addition, there is a photo of the entire G8 summit attendees who dined there with Bill Clinton. Including Boris Yeltsin. Liberals are so pathetic with their temper tantrum. Obviously they have sad pathetic little lives with way too much time to act out their mental instabilities.

“there is more to life than politics”

Do you people want more Trump? Because politicizing EVERYTHING is how you got Trump.

Next time I’m in Houston, I’m going to make it a point of eating in this establishment – and my stomach never lets me enjoy Mexican food

All these little socialists are so brave with someone else’s restaurant when they’re telling them who they can and can’t serve food to. If you want to make that choice, open your own, then you can risk your own savings and reputation to find out how much your moral posturing is really worth.

I’m betting these half-dozen losers had a little conversation after the pity party:

“How about Taco Bell?”

“Isn’t that racist and cultural appropriation?”

“Hey, man. My mom only gave me four bucks for lunch, so unless you’re buying–”