The Republican National Committee (RNC) continues to break fundraising records as it hauled in $14.2 million in July. From CBS News:

The Republican National Committee raised $14.2 million in July — the most it has ever raised in that month in a non-presidential year — bringing its total haul for the cycle to $227.2 million. Despite historic odds and voter enthusiasm favoring Democrats, the RNC is finding record-setting support among its donors, according to numbers shared first with CBS News. The RNC raised more in July of this year than it did in 2010 and 2014 combined.

“We’ve used our unprecedented grassroots support to build the biggest field program we’ve ever had to defend our House and Senate majorities,” RNC Chairwoman Ronna McDaniel said in a statement to CBS News. “History might be against us, but we’re making sure every voter knows we’re the party of results. All the Democrats have is resistance.”

The RNC has outpaced the Democrat National Committee (DNC) on fundraising for years.

The Washington Post reported in June that the RNC began this “summer with nearly twice the fundraising power” of the DNC:

As the majority of states gear up for 2018 general-election battles, the RNC yet again showed strong fundraising totals, hauling in another $14 million in May for a total of $187.7 million for the cycle, according to new Federal Election Commission records filed Wednesday night. The RNC had $47.4 million in cash on hand, records show.

The Democratic National Committee raised $5.6 million in May for a total of $97.8 million for the cycle. The DNC also remained in debt this month, as it has all year, with $8.7 million cash on hand and $5.7 million in debt, FEC records show.

About $3 million of the DNC’s debt is owed to Perkins Coie, a law firm that handles much of the legal work for Democratic campaigns and that hired the company that compiled research for a controversial dossier during the 2016 cycle on then-candidate Donald Trump’s possible connections with Russia.

A month later, The Washington Post wrote that the RNC raised $14 million in June while the DNC only brought in $8 million.

This may seem like good news, but when you dive into individual races, the Democrats have topped the Republicans. In April, Politico reported that Democrats raised more money than House Republicans in the first three months of the year. It’s the exact same thing that happened in 2010 when Republican challengers outraised Democrat incumbents.

The Republicans ended up taking back the House in 2010 and picked up 63 seats.

It looks like it hasn’t gotten better for Republicans in the summer. Politico reported in July that 56 Democrats raised more than GOP incumbents: 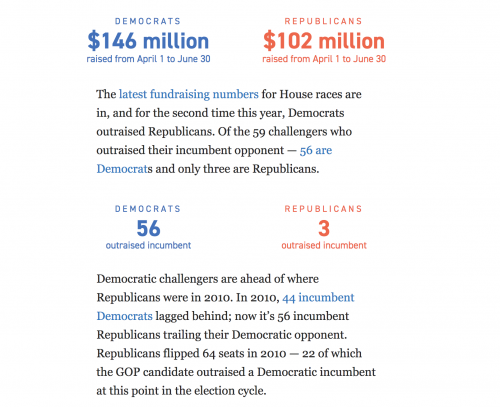 From CNN in July:

“Democrats have the infrastructure and message to capitalize on a historic surge of grassroots energy by raising record amounts from small-dollar, online contributions. There’s no question that Democrats are charging into the general elections with all the momentum, said DCCC spokesperson Tyler Law.

The NRCC spoke to their candidates’ significant cash advantages in a statement. “Democrats in moderate, competitive districts have spent the majority of their money highlighting their progressive bona fides. Meanwhile, Republicans have continued to pad their campaign coffers and are well positioned to execute effective campaigns this fall,” said NRCC national press secretary Jesse Hunt.

What does it mean? Republicans have far more breadth but have had difficulty cranking the outrage to 13 on a scale of 10 for special elections? That implies the Democrats shun the DNC itself but have poured money into individual races. But can they really manage when having to compete for every single House seat?

Trust me, the reason Republicans won in 2010 had very little to do with how much money individual candidates raised and everything to do with Obama and the Democrats destroying our nation, a National Issue if I’ve ever seen one, and the subsequent rise of the grass roots Tea Party. There is no equivalent grass roots movement happening on the Dem side this year.

Please quit with the concern trolling.

If money was all it took to win elections, Hillary would be President.

The RNC is just as corrupt as any other political organization. Never give to the RNC and certainly not the DNC. Only give to individual candidates.