Entertaining, but a mish-mash of history with distracting musical interludes. 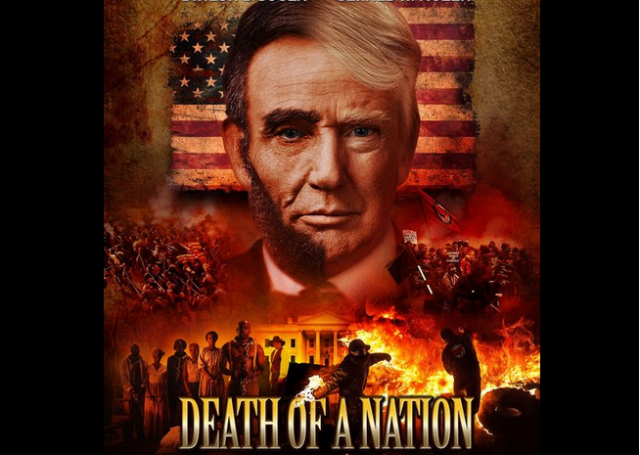 His latest film is based on The Big Lie as well as his most recent book,  Death of a Nation: Plantation Politics and the Making of the Democratic Party. The result is the recently released movie, “Death of a Nation”: Can We Save America a Second Time?”.

The film’s reviews on Rotten Tomatoes show there is vast difference in the opinions from professional critics (an amazing 0%) as opposed to the audience that actually watched it (91%).

The disparity is so obviously based on politics that PJ Media’s Roger Simon actually requested a real movie review of that film. I thought I would oblige, having fled the California heat and wildfires for the blessed relief of air-conditioning.

As a political documentary, I enjoyed elements of Death of a Nation immensely. D’Souza shines when he discusses history, featuring old clips and re-enactments to make his point. I found the material related to Nazi Germany engrossing. Perhaps the most moving was the story of Sophie Scholl, a German student and anti-Nazi political activist, active within the White Rose non-violent resistance group who was convicted of treason and beheaded.

I couldn’t help but think that Scholl offers a stark contrast to today’s social justice warriors on campus and Antifa.

The point of the film’s focus on the fascist governments of Adolph Hitler and Italy’s Benito Mussolini is to demonstrate their ideological connection to American progressivism. Additionally, the movie also reviews the history of racism in our country and explores its roots in the Democratic Party of Andrew Jackson’s time and outlines how today’s Democrats engineered a blame-shift to Republicans via Richard Nixon’s mythical “Southern Strategy”.

Where the movie lost me a bit was that it ended up being a mish-mash of these historical elements. D’Souza flipped back and forth between Nazi Germany and the American Civil War so much that the impact of these two different themes was lessened. I believe that the D’Souza film might have been better served by focusing on one era or the other, perhaps having enough material for a second film.

Another issue I had was the advertising campaign, which featured President Trump being compared with President Abraham Lincoln. I expected to see a bit more of Trump in the movie and a stronger tie made to Lincoln. While I believe the better analogy would be between Trump and the fighting general, President Ulysses Grant, I would have welcomed a bit more exploration of this topic as promoted.

One bonus element of Death of a Nation was the video review of Trump’s unexpected victory, which I enjoyed immensely. The large theater was about 1/3 full in Southern California, so the audience cheers seem a good sign that the President has some support in the home of the #Resistance.

Finally, the two musical interludes stuffed in the movie were indulgent and distracting. I would recommend that if D’Souza would like to have his material taken more seriously, then leave this element on the cutting room floor (or pick one of the productions, and save it for the end).

I thoroughly enjoyed D’Souza’s previous films 2016: Obama’s America and Hillary’s America: The Secret History of the Democratic Party. In fact, I thought his review of his time in a halfway house after he was convicted for a campaign finance violation was a entertaining and creative segue to the topic of Hillary’s plans for America. I would give both movies 4.5 stars, and enthusiastically recommend them.

In comparison, I give Death of a Nation 3.5 out of 5 stars. It is worth seeing if you enjoy this type of film, but the books would be better for understanding the themes and sharing D’Souza’s ideas with others.

See it anyway, and support this kind of film making.

Great opening. I stayed up all night to watch 2016 election day coverage, and it felt more epic than any historical event I’d ever watched on TV. My big criticism of the movie would be the singers and musical productions. Way overdone. I thought the first musical piece signaled the end of the movie, which made the Sophie Scholl segment seem out of place. The second musical production would have been much more effective had it been done with more subtlety and restraint. I would have liked to have had one simple patriotic song at the end, with a D’souza voice over highlighting what makes America great. Overall I enjoyed the movie and definitely recommend it.

What makes America Great? Its culture of Liberty.

I’ve spoken to about a half dozen people who went out to see it last weekend when it first opened. None were very impressed. If I were to ask I’d guess they might say 3.5 or maybe even 3 out of 5.

Think I’ll pass. I really enjoyed his Obama’s America. But this one just sounds too cheesy from every review I’ve seen.

Good review. Thanks. As soon as I saw the Trump/Lincoln stuff I was put off. That’s the thinnest of gruel. The whole thing seems forced.. well.. a unforced error really. Lincoln is a very problematic President for a lot of reasons. I’ll pass on this one.

Solid review. It wasn’t his best but it was ok.

I had the sense the movie was outlined when Hillary was a shoe-in and was to be another Cassandra-like warning. Then Trump won and the whole movie outline had to be reworked. It’s what made the start strong, the middle was excessively dramatic while being disjointed, and the conclusion was disappointing.

I am reading a book about Dietrich Bonhoeffer byEric Metaxas. Hitler was not dictator overnight and as the book reveals his methods of gaining power, his political views and actions it gives a picture of how people who love BIG government get in control. Forget his atrocities, look at the early days. Many resemblances to today’s activists and other nations rulers.

Forgot, Lincoln and Trump wasn’t compared as man to man . I took the comparison as the divided nation they both inherited and people hating them before they assumed office. And I really enjoyed the movie and the look at today’s ideology as compared to previous times and nations.

We probably shouldn’t hold D’Souza to the standard of a, say … Ken Burns.