“Exposing the Nazi Roots of the American Left” 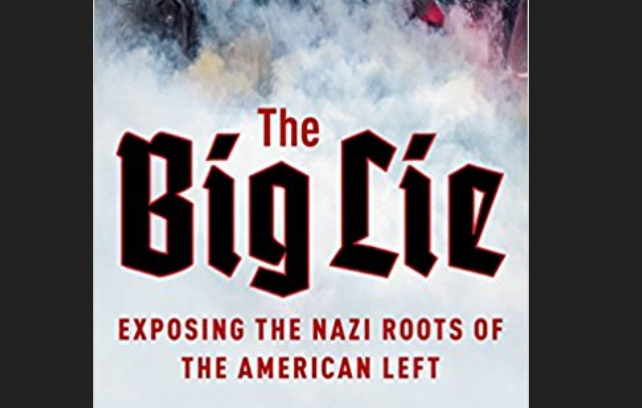 If there was ever a more perfect synchronicity to the publication of a book and the news cycle, I would be hard pressed to think of one better than the release of Dinesh D’Souza’s latest: The Big Lie – Exposing the Nazi Roots of the American Left.

Germany’s Adolph Hitler created the phrase, “the big lie,” to describe a lie so vast that “the great masses of the people” will fall for precisely because they can fathom that it isn’t true. In The Big Lie, D’Souza shows that the Democratic Left has orchestrated a campaign to paint President Trump, Republicans, conservatives…essentially anyone who doesn’t agree with them… as Nazis.

This smear is used to cover up its own dirty brand of fascist tactics. The current spate of charges against President Donald Trump and his supporters is today’s “Big Lie”.

A peak at Twitter will show how diligently the toxic Left has been working to spread this fabrication:

Even Trump’s supporters routinely get smeared as Nazis. For example, this gem was a response to a Facebook comment I made defending Trump’s exit from the Paris Climate Accord. 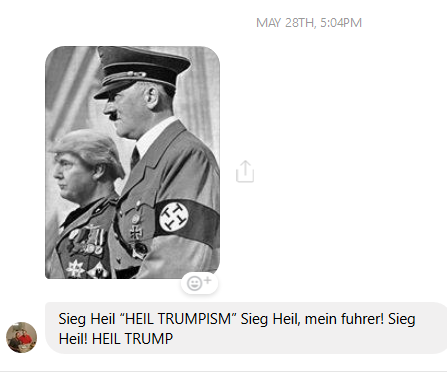 In years past, Republicans and conservatives have responded to the false charges with courtesy, humor or mockery. However, the progressives’ hysteria, brutality, and #Resist mentality lead me to believe that it is time to push back and give them a dose of their own medicine…with one YUGE difference. That is, when we say they are acting like fascists, the accusation will be based in the truth.

D’Souza’s book is a great resource for this new approach.

In a nutshell, the book connects the policies of the Democratic Party in the 19th and 20th centuries to the implementing of very specific programs of Adolph Hitler’s National Socialist German Workers Party and the tactics Hitler used to become dictator.

For example D’Souza lays out the connection between the German Nuremberg Law that prohibited marriages and extramarital intercourse between Jews and Germans, and the Jim Crow laws passed by Southern Democrats after Reconstruction that continued to be practiced until 1965.

Recently, legal scholar James Whitman studied that transcript [discussions of the Nuremberg Laws] and was astounded by what he found. As Whitman wrote in his book Hitler’s American Model, “The meeting involved lengthy discussions of the law of the United States of America.” The meeting opened with [Reich Minister of Justics Franz] Gurtner presenting a memorandum on U.S. race law, and as it progressed, Whitman noted that it turned to the U.S. example repeatedly.

The Nazis took the Democrat-created Jim Crow laws and applied them to the Jews.

I found the book very well-written and engaging. Some other points of interest:

One aspect of this book I thoroughly enjoyed was how much pre-World War II history I learned.  The chapter on “American Fuhrers” was particularly illuminating:

During Work War I, Wilson created a propaganda ministry that became the forerunner to similar ministries created by Mussolini and Hitler. In terms of its outright bullying and intimidation of the press and political opposition he faced, Jonah Goldberg writes that Wilson’s operation was more effective — by which he means ruthless — than Mussolini’s.

Wilson’s goons even turned their venom against private citizens, encouraging children to spy on their parents and neighbors to spy on their fellow neighbors. They encouraged vigilantes to threaten and even beat up ideological nonconformists….And in fact tens of thousands of Americans were arrested and imprisoned under the notorious Palmer Raids. Goldberg writes “More people were arrested and imprisoned under Wilson than under Mussolini during the entire 1920’s.”

This video offers a wonderful and entertaining retrospective of this era:

To sum up: Is The Big Lie worth the money and the time? Absolutely! I hope readers will use what they learn in the book to start the process of “Denazification”, which was D’Souza’s final and perhaps most important chapter.

I start the audio version of the book tomorrow.

Will the left label D’Souza a “Nazi” for documenting the facts? They will have to ban his book like…well…a Nazi would. This is going to be interesting.

They’ll dismiss anything he ever says and writes because of his criminal conviction (aka political prosecution solely because he told the truth about Obama).

Never mind that he is the only one in history to ever serve time for the election law they charged him with breaking.

Leftists reacted with venom towards Jonah Goldberg when he published “Liberal Fascism,” and I expect a similar reaction to this book. They hate hearing the truth.

Redistributive change because the “Jews” have too much. Check.

Could be Nazis or neo-Nazis.

Considering the left has “Nazi roots,” realize what that says about the likes of McConnell, McCain, Ryan etc’s working so diligently to enable the left’s agenda.

Yes, someone needs to tell Paul Ryan, Romney and the both Bushes about this. None of them seem to understand much about basic history or ethics.

Joe Kennedy’s Answer to the ‘Jewish Question’: Ship Them to Africa
This week marked the anniversaries of the beginning of the end of the Holocaust and Churchill’s death. America’s ambassador to Britain, JFK’s father, was on the wrong side of both.

Fuzzy Slippers in reply to notamemberofanyorganizedpolicital. | August 28, 2017 at 2:46 pm

Yes, he was. Actually, a shocking number of prominent Americans initially supported the Nazis and the fascists in Italy and Spain. It seems to be the same naive fever that struck Thomas Paine when he supported the French Revolution.

“Germany’s Adolph Hitler created the phrase, “the big lie,” to describe a lie so vast that “the great masses of the people” will fall for precisely because they can fathom that it isn’t true.”

“Germany’s Adolph Hitler created the phrase, “the big lie,” to describe a lie so vast that “the great masses of the people” will fall for precisely because they can not fathom that it isn’t true.”