“Externally, I had Weinstein associates calling me repeatedly. I knew that Weinstein was calling NBC executives directly.” 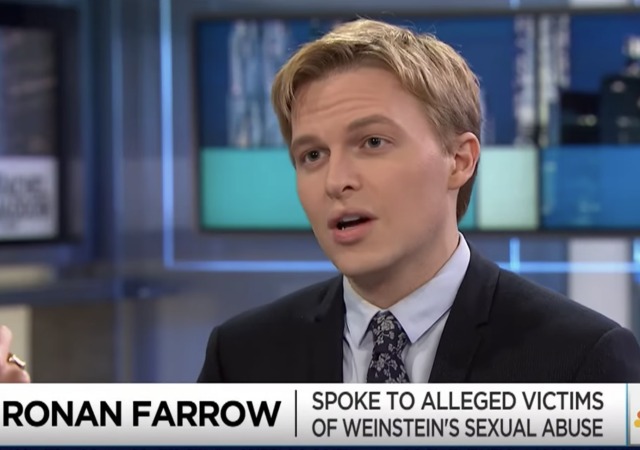 The New York Times and the Daily Beast each dropped a bombshell on NBC News on Thursday, which said that those in the upper echelon of the network not only killed Ronan Farrow’s expose of Harvey Weinstein, but also threatened Farrow if he continued digging into accusations against the Hollywood mogul.

Farrow was a rising star at NBC News, but left in August 2017. When his report on the allegations of rape, sexual assault, and sexual harassment against Weinstein came out in The New Yorker in October 2017, many people, including us at LI, wondered why NBC would pass on this report since information came out that Farrow worked on the report for eight months.

Former NBC producer Rich McHugh, who worked on the story while Farrow was still at NBC, resigned from the network on August 17, 2018, and has unleashed the beast. From The New York Times:

Now a producer who worked closely with Mr. Farrow has accused the network of putting a stop to the reporting, saying the order came from “the very highest levels of NBC.”

Rich McHugh, the producer, who recently left his job in the investigative unit of NBC News, is the first person affiliated with NBC to publicly charge that the network impeded his and Mr. Farrow’s efforts to nail down the story of Mr. Weinstein’s alleged sexual misconduct. He called the network’s handling of the matter “a massive breach of journalistic integrity.”

Mr. McHugh, 43, described NBC as “resistant” throughout the eight-month reporting process, a characterization disputed by the network. Last August, he said, it seemed that the network was no longer supporting the story.

“Three days before Ronan and I were going to head to L.A. to interview a woman with a credible rape allegation against Harvey Weinstein, I was ordered to stop, not to interview this woman,” Mr. McHugh said. “And to stand down on the story altogether.”

The producer would not disclose which executives had given him that direction. But by doing so, the network was, in his view, “killing the Harvey Weinstein story.”

Sources told the Daily Beast that “NBC News General Counsel Susan Weiner made a series of phone calls to Farrow, threatening to smear him if he continued to report on Weinstein.”

NBC News has denied these accusations. The spokesperson explained that Weiner called Farrow to make sure he didn’t tell sources that he planned the report for the NBC News.

Back in November 2016, Farrow and McHugh decided to investigate the infamous “casting couch” culture of Hollywood, where powerful men exchanged sex with female actresses for prominent roles. They took the idea to NBC News President Noah Oppenheim and he “suggested the team look into an October 2016 tweet by actress Rose McGowan that she was raped by a Hollywood executive, according to two sources with knowledge of the investigation.” The Daily Beast continued:

By February, according to the sources, Farrow had secured an on-the-record interview with McGowan in which the actress said she had been sexually harassed by a powerful producer, though she did not name Weinstein. (McGowan subsequently named Weinstein during the NBC investigation, according to a source with knowledge of the story, but reportedly pulled her interview after being legally threatened by Weinstein, who had reached a $100,000 settlement with her in 1997 after she accused him of sexual assault.)

Farrow and McHugh also obtained a bombshell audio recording from a NYPD sting in which Weinstein admitted to groping Filipina-Italian model Ambra Battilana Gutierrez in 2015. (The Battilana audio was subsequently published by The New Yorker.)

Farrow played the audio for Oppenheim, which led Farrow to think his story may not gain traction at NBC:

Farrow had begun to suspect that Oppenheim—who moonlighted as a Hollywood screenwriter—was potentially communicating with Weinstein directly about the story, according to the sources.

During a meeting in summer 2017, Oppenheim mentioned to Farrow that Weinstein had raised objections to Farrow’s reporting—even though Farrow had not yet asked Weinstein to comment on the allegations, according to individuals briefed on the meeting.

“Externally, I had Weinstein associates calling me repeatedly,” McHugh told the Times. “I knew that Weinstein was calling NBC executives directly. One time it even happened when we were in the room.”

NBC News explains that Farrow and McHugh never had a credible witness or testimony and remained “unpersuaded” when the two men played the Gutierrez tape.

Then when McHugh and Farrow began a trip to LA to tape an interview with a credible witness, NBC said no:

“Three days before Ronan and I were going to head to L.A. to interview a woman with a credible rape allegation against Harvey Weinstein, I was ordered to stop, not to interview this woman,” Mr. McHugh said. “And to stand down on the story altogether.”

The producer would not disclose which executives had given him that direction. But by doing so, the network was, in his view, “killing the Harvey Weinstein story.”

In response to the producer’s account, Noah Oppenheim, the president of NBC News, said, “He was never told to stop in the way he’s implying.”

One problem, in Mr. Oppenheim’s view, was the lack of on-the-record, on-camera interviews.

“We repeatedly made clear to Ronan and Rich McHugh the standard for publication is we needed at least one credible on-the-record victim or witness of misconduct,” Mr. Oppenheim said. “And we never met that threshold while Ronan was reporting for us.”

After the Farrow Publication

While Oppenheim told staffers at a division-wide town hall meeting that he took responsibility for the decision to let the story go, he privately told at least one colleague that NBC News Chairman Andrew Lack and Senior Communications Vice President Mark Kornblau had made him a scapegoat.

“He said to me, ‘It wasn’t my decision,’” said the colleague who spoke to Oppenheim after Farrow’s story was published at The New Yorker. “‘Mark Kornblau and Andy Lack are trying to throw me under the bus when it was Andy’s decision,’” the colleague recalled Oppenheim saying.

“This conversation is made up out of whole cloth, never happened. There is no daylight between Andy and Noah,” the spokesperson said.

While multiple higher-ups at NBC have repeatedly attempted to dismiss criticism of the network’s failure to publish the Weinstein story, questions about NBC’s decision are likely to cause more headaches in the coming months.

Farrow’s planned book Catch & Kill will probably have “his recollection of NBC’s decisions around the Weinstein story and report more broadly on the conspiracy of silence that protects powerful men.”

Considering the big names that Farrow has taken down with his reporting, I would imagine that lots of people in the entertainment industry and in politics would love to see him crushed.

How dare the peasants! Dare to dispute the media.get back in your place peasants.

NBC has consistently been the most unhinged, openly leftist of the three legacy networks. Looks like the revolution finally got around to them!

From what I have seen of NBC, they are openly racist and totally devoid of ethics.

Let’s have some feds with guts start charging these NBC execs as being accessories after the fact or for obstruction of justice?

I know how this goes:

“If you continue to pursue this, people you care about will get hurt”

Thud from a man I admired and respected, a man I went to for help.

Find “those at the very highest levels” and hang them as traitors. Dig them out of their graves and give them to the buzzards.

It is amazing how these Leftists, who spent so much time telling us how to be ethical and fair while condemning conservatives for their sins, are, one after another, being exposed to the public for the hypocrites they are. The longer we go, the more that are exposed. This is one of the reasons why the “#Walkaway” movement is so strong and gaining strength. When the Left’s failings are so obvious and widespread, even those who used to be supporters of them are getting disgusted and leaving.

Old Blue Eyes kid on a jihad for his mommy!

NBC’s entertainment division is as corrupt as their news division.

Who’d a thunk it?