“neither landed a significant hit against their opponent” 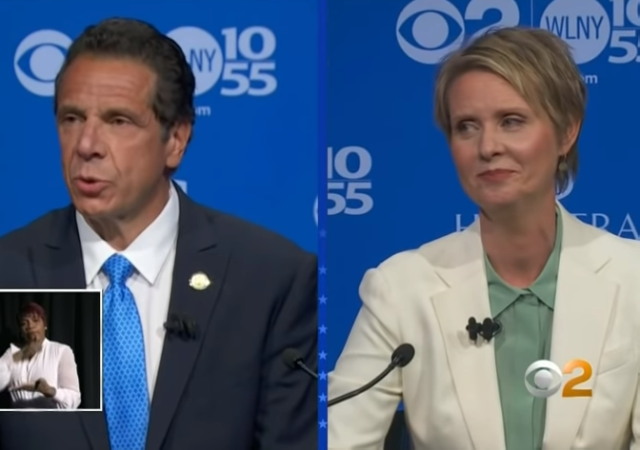 The debate between New York Governor Andrew Cuomo and progressive challenger Cynthia Nixon last night made for entertaining political theater but probably won’t do much to move the needle. According to the Real Clear Politics average of polls, Cuomo has a 33.5 point lead.

It’s still fun to watch liberals fight among themselves though.

Although the candidates criticized each other repeatedly, and accused each other of telling falsehoods, neither landed a significant hit against their opponent.

Nixon tried to highlight Cuomo’s ties to corruption in Albany, while Cuomo tried to paint Nixon as a millionaire who doesn’t release enough of her tax returns. On Friday, Nixon allowed reporters to inspect five years of her taxes.

However, Nixon was able to stand her ground against Cuomo in her first political debate, and had the opportunity to reach a wider audience.

The debate ended with a handshake between the two candidates, despite the rancor they had exhibited towards each other minutes before.

Cortney O’Brien of Townhall notes one of the heated moments:

As expected, the New York Democratic primary debate between Gov. Andrew Cuomo and Cynthia Nixon on Wednesday was a scorcher. The two battled over everything from health care and public unions, to the state of the New York subway system.

That last topic produced some heated exchanges like this:

“Can you stop interrupting,” Cuomo asked.

“Can you stop lying,” Nixon responded.

At one point, Cuomo suggested that Nixon lived in a world of “fiction rather than facts.” While she has a history of advocating on behalf of progressive issues, the governor has enacted real change, he said.

“The government is not about politics, it’s not about advocacy; it’s about doing,” Cuomo said. “It’s about management. This is real life.”

Here are some highlights from the Associated Press:

The silliest moment in the debate came when Cuomo accused Nixon of being a corporation and trying to call in favors to New York Mayor Bill de Blasio. She admitted asking the mayor to get helicopters to stop flying over Shakespeare in the Park performances:

She requested no helicopters above “Shakespeare in the Park” so people could hear. pic.twitter.com/D0BAcGJWxe

Cuomo is embarrassingly stupid. How is it that NY gets stuck with such a moron as Governor?

Los Angeles just named a street after the idiot, and he’s not even dead.(Remember: that empty suit mayor of LA Eric Garcetti is thinking of running for president. Maybe he’ll make it official while on Odumbo Drive.)

They’re Democrats. They thought they were voting for Mario the Pious (as Rush calls him).

And that stupidity is obviously hereditary given “Fredo” Cuomo’s appearances on the Clinton News Network.

It looks like lose-lose for NY again. They sure have a knack of picking the wackos.

The Republican candidate, Marc Molinaro, who is the county executive of my county, Dutchess, is very good. Don’t count him out.

While I would love to share that sentiment, this is literally only the second time I’ve seen his name. Where is he campaigning?

“Can you stop interrupting,” Cuomo asked.

“Can you stop lying,” Nixon responded.

Such uplifting debates.
I notice neither denies lying. Not surprising.

Who let Jane Hathaway out of the Clampett’s Democrat Plantation??????

Its almost like they’re trying to see who could insult Americans more.