Mugabe Not on Zimbabwe Ballot for the First Time

Mugabe Not on Zimbabwe Ballot for the First Time

“The elections today provide an opportunity to break with the past.” 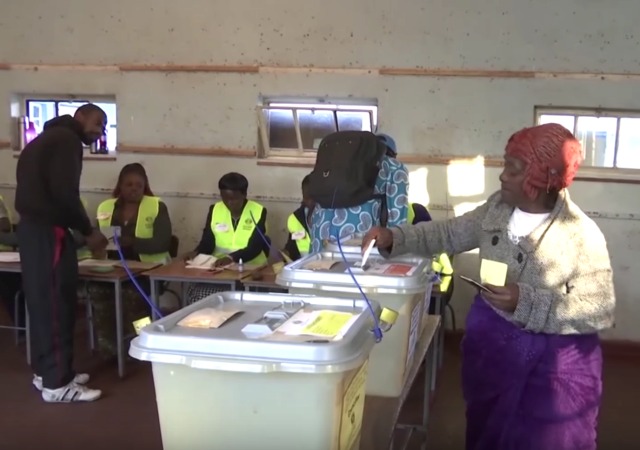 History is happening in Zimbabwe as citizens will not see long-time dictator Robert Mugabe on the presidential ballot. From The Associated Press:

“I want to do this and get on with my business. I am not leaving anything to chance. This is my future,” said Emerina Akenda, a first-time voter.

Thousands of election monitors fanned out across the country to observe a process that the opposition said was biased against them despite electoral commission assurances that it will be credible.

The two main contenders were 75-year-old President Emmerson Mnangagwa, a former deputy president who took over after Mugabe stepped down under military pressure last year, and 40-year-old Nelson Chamisa, a lawyer and pastor who became head of the main opposition party a few months ago after the death of its leader Morgan Tsvangirai.

Mugabe on Sunday called Chamisa the only viable candidate and rejected Mnangagwa and the ruling party, saying that “I cannot vote for those who have tormented me.”

Piercing whistles and cheers greeted Chamisa as he voted outside Harare, who declared on Twitter that “minus the ballot mischief … Victory is certainly certain!” He said he hoped voting in rural areas, where most of Zimbabwe’s voters are and where the ruling party usually holds away, will be fair.

Mnangagwa urged Zimbabweans to be peaceful, tweeting: “We are one people, with one dream and one destiny. We will sink or swim together.” He voted and told reporters he took Mugabe’s criticism in stride, saying: “He is a citizen … He can engage me anytime.”

“This is a critical moment in Zimbabwe’s democratic journey,” said Ellen Johnson Sirleaf, former Liberian president and a leader of one of the international observer missions.

“The elections today provide an opportunity to break with the past,” Sirleaf said at a polling station in Harare. “The lines and voter enthusiasm we are seeing this morning must be matched by an accurate count and their choice must be honored.”

Past elections were marred by violence, intimidation and irregularities, but Mnangagwa, a former enforcer for Mugabe who says he now represents change, has promised that this election will be free and fair.

So has either candidate promised to return the white farmers land? No, I didn’t think so…

But they have promised to refrain from advising the South African government on how to do it (such seizures) right.