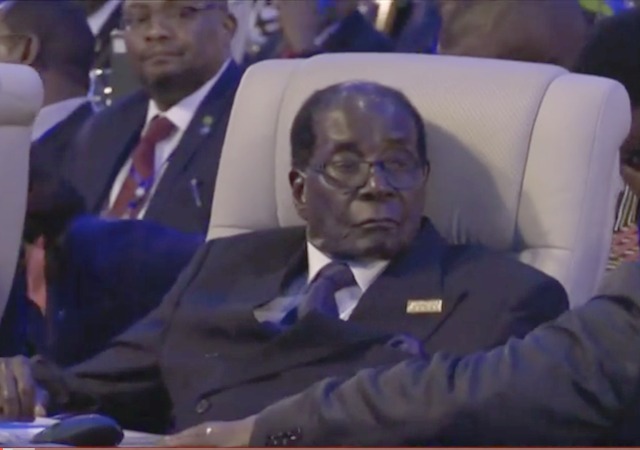 We all thought that Zimbabwe dictator Robert Mugabe would resign on Sunday. After all, the military takeover occurred last week and his party, Zanu-PF, ousted him as party leader. They then said he had 24 hours to resign or face impeachment.

Mugabe gave an insufferable speech on Sunday without resigning, which met impeachment. The dictator must have thought everyone was bluffing. To his disappointment, they meant every word and began impeachment proceedings.

Mugabe swallowed his pride and finally resigned, ending a 37 year reign. He had been the world’s oldest leader at 93-years-old.

The parliament started the impeachment on Tuesday after the 24 hour deadline passed for Mugabe to step down. He finally saw the light. From The New York Times:

Then on Tuesday, party members introduced a motion of impeachment, invoking a constitutional process that had never before been tested.

The party’s political rival, the Movement for Democratic Change, seconded the motion, a striking sign of the consensus in the political class that Mr. Mugabe must go — one that formed with astonishing speed after the military took Mr. Mugabe into custody last Wednesday.

Lawmakers had moved their gathering from Parliament to a large conference hall at a hotel and were discussing the impeachment motion when Mr. Mugabe’s justice minister, Happyton Bonyongwe, walked up to the stage.

Some people freaked out because they thought Bonyongwe was trying to bribe people to vote against impeachment. Instead, he handed the speaker a letter from Mugabe.

Notice of resignation as President of the Republic of Zimbabwe

In terms of the provisions of section 96 (1) of the constitution of Zimbabwe, amendment number 20, 2013.

Following my verbal communication with the Speaker of the National Assembly, Advocate Jacob Mudenda at 13:53 hours, 21st November, 2017 intimating my intention to resign as President of the Republic of Zimbabwe, I Robert Gabriel Mugabe in terms of section 96 (1) of the constitution of Zimbabwe hereby formally tender my resignation as the President of the Republic of Zimbabwe with immediate effect.

My decision to resign is voluntary on my part and arises from my concern for the welfare of the people of Zimbabwe and my desire to ensure a smooth, peaceful and non-violent transfer of power that underpins national security, peace and stability.

Kindly give public notice of my resignation as soon as possible as required by section 96 (1) of the constitution of Zimbabwe.

Robert Gabriel Mugabe President of the Republic of Zimbabwe.

Celebration in the Streets

Zimbabweans broke out into a party on the street now that the dictator and his wife they reviled finally stepped down.

Please watch this….for over twenty years Robert Mugabe and his wife Grace have terrorized Zimbabweans and stolen a fortune from government coffers (along with kickback schemes)….this video is heart wrenching. https://t.co/S3xmLcKIZ7

She replied “‘I have very narrow feet, so I can only wear Ferragamo.” https://t.co/GqNOafTYKB

How We Got Here

Like I said it began last week when the military took over. They were not pleased when Mugabe sacked Vice President Emmerson Mnangagwa, which paved the way for his wife, who everyone hates, Grace to succeed him when he died. From The Guardian:

But there are others who have been sidelined. Senior soldiers fear they will suffer if Grace and her associates take over. They also believe she will be corrupt, vindictive and incompetent, and know that the first lady’s violent outbursts and extravagance – as well as that of her entourage and sons – have already made her very unpopular.

The soldiers are also concerned about a further massive deterioration of the economy. Inflation and the collapse of the Zimbabwean currency has already impoverished many rank and file soldiers, and hit the incomes of officers too. The wages of the millions of government employees – troops, police, civil servants and others – often go unpaid for months on end. This means the seizure of power today will be greeted by many with relief, if not enthusiasm.

Then the military said it had prepared itself “to step in to end the turmoil in the ruling Zanu-PF party.” General Constatine Chiwenga recently went to China, Zimbabwe’s closest ally, to meet with military leaders. China did not confirm if they talked with Chiwenga about a military takeover.

Last Monday, Chiwenga announced that leave for the defense forces had been canceled:

The situation in our country has moved to another level … To members of the Zimbabwe defence forces, all leave is cancelled and you are all to return to your barracks with immediate effect …

Let it be clear we intend to address the human security threats in our country. Therefore, any provocation will be met with an appropriate response.

The Guardian reported that Mnangagwa has returned to Zimbabwe. Grace is reportedly abroad, but that has not been confirmed.

The Non-Resignation and Impeachment

After the party ousted Mugabe, rumors swirled that the dictator planned to resign after giving the ultimatum. But instead he gave a long winded speech or something like that, which included a page turn that took 10 years, to assert his power. I’m guessing he was just trying to call their bluff.

But no, the people had enough of the dictator and his wife that ruined the country and his numerous human rights violations.

Those who led his opposition promised to go through the impeachment process, especially since the ruling party was finally on their side. The minority party has tried to impeach Mugabe before, but the Zanu-PF members resisted.

The initial fight was by the two “second in command”.. the VP and Grace. As with Maduro after chavez, the revolution continues. Zim and SA are too deeply entrenched in the Marxist tar pits to crawl free into a successful future that requires abandonment of their politics and embracing “colonial” based policies. The closest version that may work is the ChiCom version.. but for now tribalism persists.

For a second there I thought you were talking about Detroit.

Detroit is the sista city to Harare.

“They also believe she will be corrupt, vindictive and incompetent, and know that the first lady’s violent outbursts and extravagance – ”

he figured out that swallowing his pride was preferable to eating a bullet.

Professor, you need to write a post to this about Nazis in education… sorry, it’s not relevant to this post…

There is a video at this link that will make your skin crawl as the Left intellectuals try to bludgeon this undergrad for having the audacity to try to present two side of the story… you see they aren’t interested in truth, only their own disgusting propaganda

The US is spending about a $175MM is Zim this year to subsidize the black supremacists that rule the place. The US needs to use the leverage it has to demand justice for the genocide and pillaging that has occurred there since the late 90’s. Moreover, using the leverage would help re-establish commercial agriculture there and raise the standard of living in the rural and urban areas.

This article from earlier this year provides insight into how the black supremacist that we foolishly have been subsidizing with no consequence killed the proverbial small but golden goose that was laying the eggs for them.

Better yet, don’t send a dollar to Zim-bob-we. Let that nation figure out its own problems. The people are intelligent and industrious. It’s up to them to throw off the shackles of socialism and tribalism. Zimbabwe isn’t strategically important to us.

is one allowed to say what is the mental abilities of black Africans – without being labeled Raycists ?

the Blacks who got to the USA, in which ever way were the luckiest and most fortunate, not the other way around.

Raycist me but nonetheless correct.

Anybody seen the old dictator since he “resigned”? I wonder if was a 9mm “resignation”.

This wasn’t an oppressed people throwing off a tyrannical corruptocrat. This was some army officers who suspected they’d have major trouble with the old codger’s successor.

It was all probably too late. The country’s agriculture is destroyed. It will be very difficult to bring it back; the land is still there, but the people who could do it are not.

Zimbabwe does have considerable metal ore and mineral resources. I don’t know if Mugabe managed to destroy those, too.